Don't Be a Victim When Corporate America Crumbles
By Mike DiBiase
Wednesday, July 10, 2019 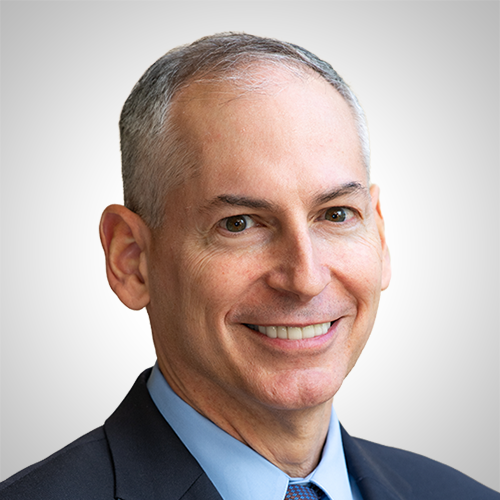 Imagine turning on your TV and seeing this headline flashing across the screen...

No matter how old you are, you probably don't believe that will happen in your lifetime. The thought of online-retail giant Amazon (AMZN) going out of business seems impossible today.

But not long ago, people probably thought the same about another innovative retailer... Sears, Roebuck and Company.

The company's mail-order catalogs offered folks a new way to shop from the convenience of their own homes. And for those who liked to shop in person, Sears built large department stores outside of cities that attracted masses of shoppers in America's growing suburbs.

But over the years, more efficient retailers took over – like Amazon and discount powerhouse Walmart (WMT).

You might think, what's the big deal? It's just one company.

But in reality, it's much more than that. Corporate debt has soared since the last financial crisis. Cracks are forming in the credit markets once again. And one strategy will help you tremendously in the months and years ahead.

Sears' bankruptcy surprised no one by the end. For years, it was obvious the obsolete, debt-ridden retailer was doomed. But Sears isn't the only iconic American business that recently met this fate...

About a year earlier, Toys "R" Us – once the world's largest toy retailer – went bankrupt. Not too long ago, you could barely get through the crowds inside its stores during the height of the holiday season. But like Sears, it couldn't survive the weight of its massive debt.

At first glance, the demise of Sears and the death Toys "R" Us may not seem important to the broader market...

But these are not isolated events.

Sears and Toys "R" Us are just the beginning for corporate America. They're just two of the early, prominent dominoes to fall in the biggest wave of corporate bankruptcies in American history.

This wave will lead to a massive decline in the stock market...

Worst of all, most investors aren't prepared. They could see huge portions of their wealth wiped out in a short period. Some investors could lose everything in the years ahead.

Fortunately, you don't have to be one of the victims...

You see, not every bankrupt company will go out of business. Instead, these companies will simply have their equity "reset"... Old stockholders will be wiped out and new stockholders will take control of them.

The only thing that will change is who owns the assets... That's why our founder Porter Stansberry says this event will be the greatest legal transfer of wealth in history.

More important, the wave of bankruptcies will open the door to tremendous opportunities...

When investors panic – as they always do at some point – even great companies will sell off. If you're prepared, you could make a killing.

Some of the world's greatest investors wait for moments like this...

I'm talking about billionaires like Warren Buffett... John Paulson... Paul Singer... Andy Beal... Sam Zell... and Wilbur Ross. When the crisis unfolds, they pounce. And they use a little-known type of investment to make more money than you ever thought possible.

It's a way to boost your profits completely outside of stocks... with the potential for equity-like capital gains... and with far, far less risk than individual stocks.

This "secret" investment is a type of corporate bond called a distressed bond...

But before we get into distressed bonds, you must understand the basics about corporate bonds...

Corporate bonds are debt instruments that companies issue to the public. They're typically issued in increments of $1,000, known as the "par value" or "principal" of the bond.

Unlike a share of stock, a bond is a legal contract between the issuer (company) and buyer of the bond. That makes them much safer than stocks. The buyer is legally entitled to collect the full $1,000 par value on the stated maturity date of the bond.

Along the way, the buyer is also entitled to receive regular interest payments (usually every six months) for lending the money. The company doesn't have a choice... It has to pay you.

Bonds are much simpler and easier to analyze than stocks. That's because they're binary. Again, the company either pays you what it owes, or it doesn't. That's it.

If the company pays you all of your interest and principal, you know exactly what return you'll make on your investment at the time you buy the bond. And if the company doesn't pay, it's considered to be in "default" on its debt and lenders can force it into bankruptcy.

So when buying a corporate bond, the only question is: Will the company stay in business and pay you all of your interest and principal through maturity?

It's really that simple.

Now, distressed bonds are different from most corporate bonds in one critical way...

They trade for a fraction of their contractual value.

Most bonds trade regularly on the secondary market. Their prices are determined by supply and demand. But the thing is... you can sometimes buy bonds at discounts from par value ($1,000) ranging from 10% to more than 70%.

Here's what's important to remember... Regardless of what you pay for the bond, your legal right to collect interest payments and the $1,000 principal at maturity doesn't change.

The company has the same obligation to pay you $1,000 at maturity, even if you only pay a fraction of the usual $1,000 cost. That enables you to earn large, equity-like capital gains with a much safer investment than stocks. Plus, you collect interest payments that can be up to 20% per year of the amount you invested.

Most people don't know that it's possible to buy this type of bond as an individual investor... The key to this strategy is knowing which bonds will pay you, and which ones won't.

And finding truly great, safe distressed bonds with extraordinary returns is possible in rare moments of crisis... like the one we're about to enter. The coming crisis will make it possible to buy high-quality bonds for $0.60... $0.50... even as little as $0.30 on the dollar.

That's because the bond market reacts violently in these situations...

You see, most corporate bonds are not held by individual investors. Instead, they're held by big institutions like mutual funds, pension funds, and insurance companies. And these institutions can only hold bonds rated "investment grade."

Credit-ratings agencies assign a rating to most bonds, depending on how safe they believe the bonds to be. Ratings range from "AAA" (safest) all the way down to "CCC" (riskiest).

The lowest rung on the "investment grade" ladder is "BBB." When a bond with a "BBB" rating gets downgraded, it gets moved into "noninvestment grade" – or "junk" – status ("BB" or lower). Then, big institutional investors are forced to sell their positions.

This is important because roughly half of all investment-grade bonds today are rated "BBB." That number has quadrupled over the past decade. Companies are much more heavily indebted today... Many can barely afford their interest payments.

In the coming years, many of these bonds will be downgraded to junk status...

Companies downgraded from investment-grade to junk are known as "fallen angels." Fallen angels are a fertile ground for finding good distressed-debt opportunities...

Thousands of portfolio managers will be forced to sell their safe bonds for no other reason than they've been downgraded by the credit agencies. And since the bond market is much less liquid than the stock market, there aren't enough buyers to absorb the increased supply.

Massive selling will force prices much, much lower... And these safe bonds will trade for pennies on the dollar. That's when we'll be ready to strike – and earn massive profits.

Tomorrow, I'll share the key questions we ask to determine whether these bonds are safe.

Editor's note: Anyone can learn to use this strategy... If you don't believe it, just listen to what one of our subscribers is saying now. A few days ago, we handed him the "mic" so he could tell his story – and share how this way of investing helped him retire at age 52, with "very little effort." Watch his presentation right here.

"Just because a company is headed for bankruptcy doesn't necessarily mean its bonds aren't safe," Mike says. "You can earn massive, safe returns when you invest in the debt of dying companies." This strategy could radically change the way you invest... Learn more here.

"There is much less risk in bonds than there is in stocks," Porter Stansberry writes. Find out why in his classic essay: Why You Should Never Buy Stocks.

Today we’re checking in on a major financial player…

Longtime readers know we like to keep an eye on titans in the financial industry. America’s “financial backbone” is made up of powerful banks and credit-card companies. They profit when the economy is going strong – when people are buying and borrowing. Today’s company recently posted solid quarterly results…

Ally Financial (ALLY) is a banking and financial services company with roughly $180 billion in funded assets. From the car assembly lines of the 1920s through the Great Recession, the company has survived and thrived… helping Americans invest in important assets like cars and homes. And when Ally is doing well, it’s a sign that the economy is humming along. In the first quarter, Ally reported its highest-ever quarterly deposit growth… Plus, revenue and earnings rose 5% and 17% year-over-year, respectively.

If you take a look at the chart, you can see that ALLY shares have exploded in 2019. They’re up more than 50% from their December lows… and recently posted a fresh all-time high. When Ally is doing well, it’s a good sign Americans are spending with confidence… 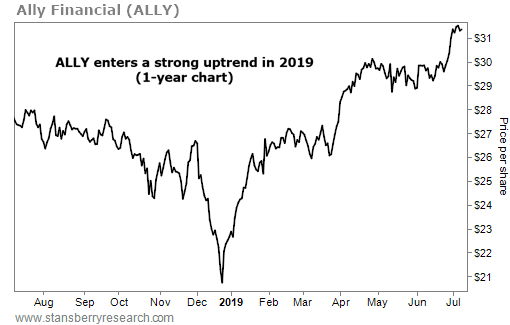