A Key Lesson From Some of the World's Best Investors
By Chris Igou
Tuesday, July 30, 2019

We waited for the plane that would take us to a remote island in Indonesia...

A grueling 30-plus hours of travel were already behind us. One final 90-minute flight was all that stood between me and 10 days of great food, great people, and incredible surfing.

But the charter plane only flew twice a day... once to take new guests to the island, and a later flight to take them back to the Medan airport.

That's when I met Kennett. We were both waiting to head to the island.

Kennett has more than 20 years of experience in the financial industry... He's both a chartered financial analyst and a certified public accountant. So it didn't take long for our discussion to dive into finance...

My friend and colleague Steve Sjuggerud quickly chimed in. He was surprised to have another finance guy on the trip with us. And when Steve shared the story of how he discovered South African company Naspers (NPSNY), Kennett's face lit up...

"I never expected to be in Indonesia talking to Americans about South Africa's largest company," he said, chuckling to himself.

Today, I'll share some of what we discussed with Kennett. I'll cover the No. 1 characteristic that makes Naspers' leadership some of the best investors in the world... And I'll show you how you can put it work yourself.

Before I get to all of that, I can't skip over the fun parts of our time in Indonesia...

It ended up being the trip of a lifetime. I made bonds with people that I hope will last forever. We spent 10 days surfing on an island with world-class waves.

I've been to Costa Rica, Nicaragua, and California for surfing trips... And I mean it when I say this was by far the best. The place we stayed at looked like it came straight out of a magazine. Here's a picture of a few of us heading out for one of our surfing sessions... 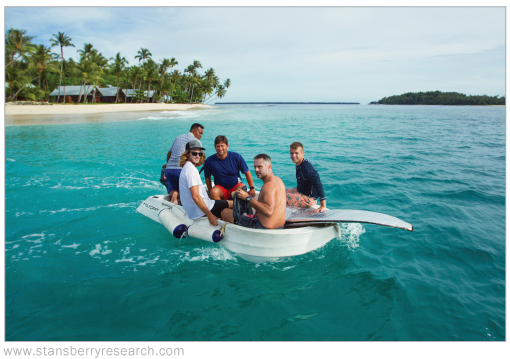 That's me on the right, with the long-sleeved rash guard. You can see Steve in the middle, wearing the dark blue shirt. Kennett is sitting between us.

However, I'm not writing today just to tell you about the surfing. I want to share what I picked up about this incredible company during my time with Kennett.

We covered everything from Naspers' brilliant management team to its incredible investments in innovative companies...

Of course, Naspers is best known for its investment in Chinese mega-app-maker Tencent (TCEHY). It invested $32 million into the company in 2001. Naspers still owns a 31% stake in Tencent today. And it's worth roughly $130 billion.

The stake is so valuable that Naspers is spinning off an entirely new company this year, just to avoid throwing off South Africa's stock market.

Tencent wasn't a one-off investment success for the company, either. Naspers has recreated this success over and over again through the years.

Naspers actually owns the "Amazon of South Africa" – a company called Takealot. It's everywhere... Kennett showed us the Takealot app on his phone and explained how huge it is in South Africa.

Another recent example was Naspers' investment in India-based e-commerce company Flipkart... the "Amazon of India." It is Amazon's (AMZN) main competitor in the country. In fact, Flipkart is leading Amazon in sales in India as of 2018.

Naspers put a total of $616 million into Flipkart after its initial investment in August 2012. The company more than tripled its money, selling its 11% stake to retail giant Walmart (WMT) for $2.2 billion in May 2018.

So what's the secret? Well, there isn't just one. But Naspers does rely on a simple theme that every investor can implement himself.

It never lets a poor performer turn into a catastrophic loss...

Not every investment has turned out to be a big winner for Naspers. But the folks in management always made sure they had an exit plan.

Steve once had lunch with Naspers CEO Bob van Dijk in December 2017. Bob told Steve, point blank, that they "weed out what's not working" and move on.

If the business plan is good, but the numbers aren't there, they don't wait around. They don't let emotions rule the day. They shut it down.

You can use this same concept with your own investments. No matter how confident you are in your investment ideas, remember to always protect your downside...

You can do this by using a simple 25% trailing stop, selling if a stock falls 25% from its highs. Or you can use a more complicated approach. The important part is having a plan. You need something that allows you to methodically cut your losses and let your winners ride.

If you can follow this simple rule, you'll have a great chance of outperforming the markets... It'll reduce the damage and keep you out of positions that plunge 50% or more.

No one – not even the most successful investors in the world – can predict the future. That's why you must be like Naspers and always have an exit plan.

"Some folks trade for entertainment," Ben Morris says. "They just bet and hope." Read more about how a sophisticated investor should decide when to sell right here: When Do You 'Get Up From the Table'?

"History is full of investing disasters," Vic Lederman writes. But you don't have to be a victim... Learn more about how to control your emotions and avoid devastating losses right here: The Simplest Way to Avoid Investment Catastrophe.

Longtime readers know we love investing in what Porter Stansberry calls “Global Elite” businesses. These companies are usually at the top of their industries. They have fortress-like balance sheets. And their brands are known all over the world. Today’s company is a classic example…

We’re talking about Hershey (HSY). This $32 billion snack maker boasts popular brands like Reese’s Peanut Butter Cups and Kit Kat bars. Folks have loved these candies for years, and that’s not about to change. In the most recent quarter, Hershey reported net sales of nearly $1.8 billion, up about 1% from the same quarter last year. And the company boosted its 2019 forecast, too.

As you can see in today’s chart, HSY shares have surged more than 50% over the past year. The stock recently hit a fresh all-time high – and the position is up roughly 330% in  Stansberry’s Investment Advisory after Porter recommended shares in 2007. Congrats to Porter and his team on another great call… 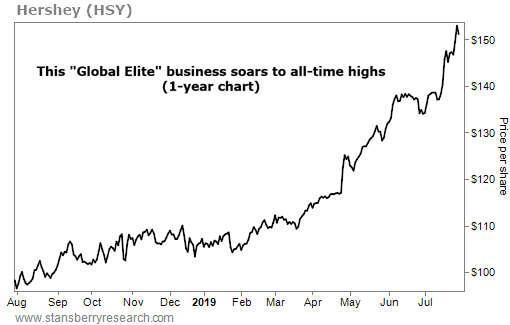