Our Last Window of Opportunity to Buy Stocks
By Steve Sjuggerud
Thursday, May 9, 2019

The Melt Up is ON.

The time to act is here. If you don't get moving NOW, you risk missing out entirely.

Even worse, if you wait any longer, you could act at the wrong time. You could become the "greater fool," buying at the top of the market. And if you make that mistake, it could spell doom for your portfolio.

The peak is closer than it has ever been. We're not at the end yet, as I'll explain today... But you are almost out of time.

I can't stress this enough. If you want to earn big profits... if you want to cushion your portfolio or retirement... my friend, this could be your last chance.

So please, pay attention. A lot has happened in recent weeks. And the pieces falling into place give us a precious window of opportunity – before the bottom falls out.

When it comes to what's happening in the market right now, most folks get it all wrong...

Stocks broke out to new all-time highs last month. The market is up around 16% this year. And the big worries that dominated last December – when stocks were in the middle of a major correction – have mostly disappeared.

The average Joe looks at this and gets scared. If stocks are hitting highs, he thinks he must have missed his chance.

This couldn't be further from the truth. The reality is that new highs are a good thing. And they show why we have a window of opportunity to make money right now.

So if the new highs scared you, or if the recent dip has you nervous, keep reading...

The rapid fall in late 2018 was followed by the strongest January in 30 years... And the overall rally has continued for months.

The S&P 500 recently hit levels never before seen in its history. And that tells me that the rally should continue. Just take a look at the table below...

The table shows U.S. stock returns going back to 1928. The typical one-year return for stocks over that time was 5.5% (not including dividends). But surprisingly to most folks, returns are better after the market hits new highs.

New 52-week highs typically led to returns of 7.5% a year later. And new all-time highs led to outperformance, too... 6.3% returns over the next year.

Most important, this shows us all-time highs are NOT a bad omen for stocks going forward.

Based on history, the recent new highs should help propel stocks even higher. Right now, we have a window of six to 12 months to profit.

Of course, what happens after that is obvious, too... The Melt Down will happen. It always does. And this bull market will be no exception.

Let me be clear... we're not there yet. We still have a window of opportunity to profit. But our chance is limited. I urge you not to miss it.

In fact, I believe the final push of this Melt Up is starting now. Tomorrow, I'll explain exactly why... And I'll tell you why I believe the biggest gains are likely ahead of us – to come in the next few months.

P.S. I've said it many times... If you're on board for the Melt Up, you need a plan for the Melt Down. You do not want to be unprepared when it happens.

That's why my good friend and colleague Porter Stansberry is putting together a special event to give you the exact tools you need...

It's called the Bear Market Survival Event. On Wednesday, May 15, he's sharing the stage with investing legend Jim Rogers to go over the steps you must take – right now – to protect and grow your wealth in the next bear market.

I urge you to check it out... It's completely free to tune in. You can get the details right here.

"Mom and Pop are getting bullish... Isn't it time to run for the exits?" Steve asks. Get the surprising details on why this isn't a sell signal here: The 'Dumb Money' Is Bullish... But Don't Sell Now.

"This sector is off to a stellar start in 2019," Brett Eversole writes. "But if you think you've missed it, you're dead wrong. History says the big rally isn't over yet." Learn more about a sector that is poised to move higher right here.

Market Notes
INVESTING IN THE MODERN LOVE STORY PAYS OFF

This secular trend is changing the way we meet people…

Today, one in five committed relationships begins online. You can thank the smartphone boom – these days, finding a date is as simple as “swiping right.” Now, the online dating market has an estimated worth of more than $1.6 billion. And investors can still make good money betting on this trend…

Match (MTCH) is a prime example. It owns Match, OkCupid, and Tinder – three of the most popular dating platforms. Tinder alone had 4.7 million average subscribers in the most recent quarter. That’s a jump of more than a million from the prior year… And it adds up to one thing: a lot of money. In fact, excluding games, Tinder is now the highest-grossing app worldwide.

As you can see in today’s chart, MTCH recently hit a new all-time high. You might also remember our colleague Dr. David Eifrig recommended the stock to his Retirement Millionaire subscribers in 2017. Those who followed his advice are up 120% so far in less than two years… Congratulations to Doc on another great call! 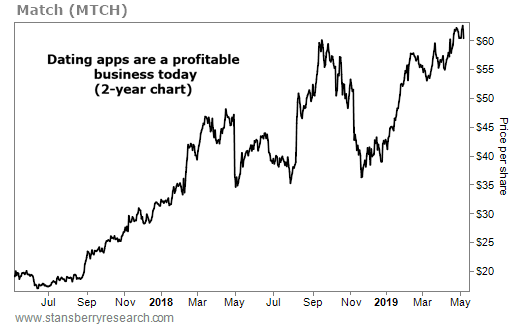