Stocks tend to peak when mom-and-pop investors go "all in." When the average person throws caution to the wind and buys, we're in for trouble.

Well, based on one measure, that's happening today. These folks – knows as the "dumb money" – are hitting high levels of bullishness right now.

That must be a bad sign, right? Mom and Pop are getting bullish... Isn't it time to run for the exits?

The dumb money is betting on higher stock prices. But what might surprise you is that this isn't a glaring sell signal – yet.

If you're not familiar with the term "dumb money," it's the label for investors who've historically done a terrible job timing the market.

The "smart money," like hedge-fund managers and commercial hedgers, get in when assets are hated and get out when they're loved. If the smart money is long U.S. stocks, it's probably a good bet that U.S. stocks will go up.

The opposite is true for the dumb money. These are the traders on the other side of the bet. They get caught up in the moment and buy based on emotion... going long at the worst possible time.

That's according to the proprietary dumb-money confidence score from my good friend Jason Goepfert. (I've known Jason for years... And when it comes to tracking investor sentiment, he's the best in the world, in my opinion. You can subscribe to his research through his website SentimenTrader.com.)

Jason's dumb-money confidence scale goes from 0 to 1, with zero representing the most extreme case of bearishness... and one representing extreme bullishness.

Today's reading is incredibly high at 0.85. And while that's one of the higher readings we've seen during this bull market, it doesn't mean the end is here.

Similar instances happened in 2010, 2013, and 2016. The dumb-money confidence in these cases broke above 0.8 each time... signaling multiyear bullishness.

These weren't "sell everything" signals, though. The S&P 500 rallied double digits over the next year in each case. Take a look... 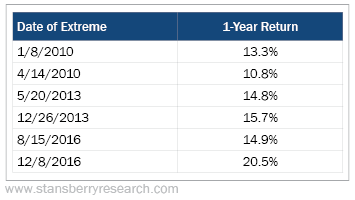 Today, mom-and-pop investors are losing their fear and turning bullish again. They're more excited about stocks than we've seen in years. So we have to ask ourselves this...

Is this the end of the bull market? Have we reached the top?

If the answer is yes, then we need to pay attention to this reading... We'd want to sell everything and move along.

But I don't believe this is the top. Not yet, at least. History shows us stocks can still go higher this year. The economy is still moving higher, too. Lastly, the "early warning" indicators that we track for signs of a stock market peak are still in green-light territory today.

I also expect we'll see much higher highs as the Melt Up surges to a blow-off top. And because of that, this isn't the glaring sell signal you might expect.

When Mom and Pop reach all-time bullish levels – and when our other indicators tell us the end is near – it will be time to be cautious. But we aren't there yet.

That's why I continue to pound the table on U.S. stocks. Stay long.

"Longtime readers know that bull market peaks typically happen alongside a major buying frenzy," Steve says. "That's what happens before the end begins. But we're not there yet." Read more about another sentiment indicator that points to more upside ahead right here.

"We are in the late stages of a massive wealth-creation event," Steve writes. "When it's over, we likely won't see another opportunity like it for decades." Right now, he's bullish on a surprising sector of the market that many investors fear. Learn more here.

Market Notes
THIS CYBERCRIME FIGHTER IS STAGING A TRIPLE-DIGIT RALLY

As the world’s businesses rely more on the Internet, criminals and hackers have seized the chance to wreak havoc. But the burgeoning cybersecurity industry works to prevent such online attacks… while giving investors a powerful moneymaking opportunity. Today’s company is a rapidly growing leader in this field…

Okta (OKTA) is an $11 billion provider of identity-management software, mostly for businesses. It stores all your login credentials for more than 5,000 popular apps, and you only have to sign on once to use them all. Plus, its authentication service ensures that the right person gets this easy access… not an intruder. These in-demand solutions brought Okta a record $399 million in revenue last year – an incredible 56% increase from 2017.

Alongside rising sales, OKTA shares have soared roughly 140% over the past year. They just hit new all-time highs. As businesses keep trying to be safe but productive online, Okta should only get stronger… 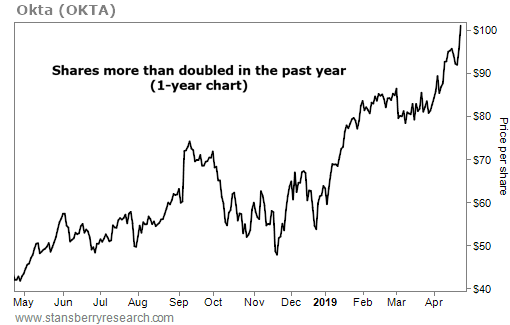