A Worrying Sign for This Bull Market
By Steve Sjuggerud
Thursday, August 8, 2019

I've made a name for myself being as bullish as anyone over the last 10 years...

I called the 2009 market bottom nearly to the day right here in DailyWealth. And since then, I've pounded the table on stocks year after year.

It wasn't always easy, but it was the right call. The S&P 500 has returned more than 400% since then, including dividends. And I've consistently told readers to stay long as we hit new high after new high.

I want to make one thing clear, though – I'm no perma-bull. I know this bull market will end... and that it could happen soon.

In fact, one indicator makes me cautious today. The odds of a recession are as high as we've seen since 2007. And that means poor returns could be on the way.

The Federal Reserve Bank of New York is worried.

It sees the yield curve is flattening (and is nearly inverted)... And it knows its history.

You see, an inverted yield curve is a fantastic predictor of looming recessions. And the yield curve I track most closely – the spread between 10-year and two-year Treasury bonds – is darn close to inverting.

The New York Fed has been keeping an eye on this measure, too. It even built an indicator to predict how likely a recession is over the next 12 months, based on interest rates.

It measures the odds of recession from 0% to 100%. And right now, that indicator says a recession is more likely than we've seen since 2007. Take a look... 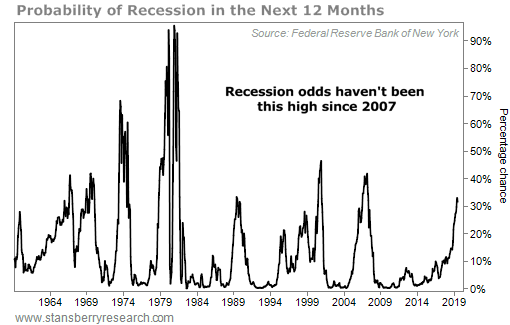 This indicator goes all the way back to 1959. And it has a history of spiking to levels like today's before a recession shows up.

More specifically, the New York Fed's indicator tends to accurately predict recessions when it puts odds at 30% or more. And today, it puts odds of a recession in the next 12 months at 31.5%.

The question to ask is what that means for future returns. It should be obvious that if a recession is becoming more likely, that doesn't bode well for stocks. And when I analyzed the data, it proved just that...

The table below shows the full details. It highlights what happened after a new reading of 30% or more from this indicator. Take a look...

Two things become immediately clear from this table... 1) A looming recession is not good for stocks, but 2) it doesn't guarantee a stock market crash, either.

Similar instances led to minor losses over the next three and six months. Stocks actually went up over the next year. But they performed well below what's typical.

We know that this bull market will end. And we know we're closer to the end than the beginning. The odds of a recession are the highest we've seen in more than a decade, according to the New York Fed... But that doesn't make a crash imminent.

Even after a few bad days in the market, the broader trend is still in our favor. And until that changes, I recommend staying long.

"This might be the craziest thing happening in the financial world right now," Steve writes. "Eventually, folks are going to wake up... And then, that money will flow where it's treated best." Learn more about why the Melt Up still has room to run right here.

Regular readers know Steve and his team follow several "early warning indicators" for the health of the overall market. Get the details on two of them right here.

Today, we’re checking in on a once-trendy stock that has been devastated since its initial public offering (“IPO”)…

Longtime DailyWealth readers know that if everyone is talking about a stock, it’s usually time to step back. Fad stocks may be popular at cocktail parties… But when everyone has already bought in, there’s nowhere for prices to go but down. Today’s company is a prime example…

Fitbit (FIT) makes wearable electronic devices that help folks track their fitness goals. At its IPO in 2015, everyone was excited. The stock opened around $30 per share and soared above $50 in less than two months. However, established tech giants like Apple (AAPL) make devices that can track fitness and do much more… And the competition has weighed on Fitbit. The company recently reported lower-than-expected sales for its Versa Lite smartwatch and lowered guidance for the year.

Since 2015, the stock has been battered. Shares are down 94% from their all-time high. It serves as a hard lesson… If everyone is hyped about a stock at a cocktail party, stay away… 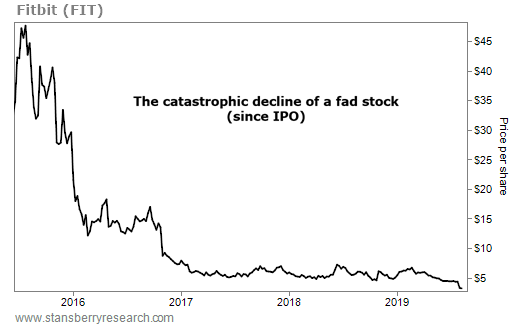