It's Time to Get OUT of Naspers and Into This Company
By Steve Sjuggerud
Tuesday, August 6, 2019

This is the biggest news that no one's paying attention to right now...

The backdoor way into one of my favorite investments will soon be even better. It's the last chance to buy one of the world's best businesses at a major discount.

Importantly, thanks to what's happening right now, that discount could soon disappear... which means time is running out to seize this incredible value.

I first outlined what was going on in March. A lot has happened since then. Today, I'll give you the latest update, including why this big news keeps getting better...

If you've been reading DailyWealth for long, you're probably familiar with Tencent (TCEHY). The company owns China's mega-app WeChat, and a lot more.

I've predicted it could become the world's most valuable company. But the funny thing is that a little-known company in South Africa has been a major shareholder of this business for years...

That company is Naspers. And it owns a 31% stake in Tencent.

Naspers acquired a $32 million stake in Tencent in 2001, making what might be the most successful investment of this century.

Tencent has performed remarkably well since then, growing to become one of the world's 10 largest companies. Naspers' small $32 million investment has turned into more than $130 billion as a result.

The catch was, it also caused Naspers to outgrow the South African stock exchange. And that brings us to the recent news...

Naspers is in the process of spinning out its Tencent shares (and a lot more) into a new company that will trade in Amsterdam.

This is huge news because Naspers has traded at a discount to the value of its Tencent stake in recent years. It was never able to catch up, because institutional investors in South Africa didn't want to own too much of Naspers and throw their portfolios out of balance.

Now, this spinoff company can grow freely – and investors have a chance to make huge profits as the discount disappears.

The story gets even better, though. That's because Naspers doesn't just own Tencent...

The company has created or invested in dozens of other exciting technology, e-commerce, and payment companies throughout the world. It does this by finding huge, untapped markets, and then applying business models that are already successful in other parts of the world.

For example, it has invested in Russia's largest social media network, VK. It also built a network of platforms for classified ads throughout several emerging markets. And it's building a similar network for food-delivery services.

These kinds of "new economy" businesses have the potential for explosive growth... especially in emerging markets, where American tech giants don't generally go.

This is what makes the spinoff company – named Prosus – so exciting. Naspers isn't just moving its Tencent stake into Prosus... It's also moving its most exciting and high-growth businesses to Prosus as well.

In short, all the good stuff is moving to the new listing in Amsterdam. The stuff staying with Naspers in South Africa is its "boring" local businesses. Perfect!

We want to own the new listing. This spinoff is huge news for anyone looking to make money on this anomaly...

By moving the Tencent stake – and the rest of the good stuff – to Amsterdam, the company can finally escape the limitations of the South African stock market. A more international group of investors will be able to own Prosus. And that means we should see the discount to Tencent start to close... boosting investor profits.

I've recommended Naspers shares for years as a way to own Tencent at a discount. But once Prosus shares hit the open market – which should be in September – the better bet is to move money into Prosus to capitalize on the situation.

Again, trading hasn't begun just yet. But keep an eye out... You'll want to own Prosus shares once they're available. And that could be as soon as next month.

Catch up on Chris Igou's essay on Naspers – and an important takeaway from the company's leadership – here: A Key Lesson From Some of the World's Best Investors.

"Thanks to extraordinary advances in technology, an epic period of transformation is coming for this industry," Matt McCall says. Learn more about another opportunity in tech innovation that could be poised for explosive growth right here.

Today, we’re highlighting the gains that are possible when you invest in the world’s best companies…

Regular readers will recognize the term “World Dominating Dividend Growers.” These are the top companies in their industries, each with a history of steady sales and profits… But they also return tons of cash to shareholders through dividends and stock buybacks. Today’s company follows this exceptional business model…

Nestlé (NSRGY) is a $314 billion consumer-goods giant. The company boasts popular brands like Häagen-Dazs (ice cream), Purina (pet food), and Nescafé (coffee). Consumers know and trust these names… And that’s a big reason for Nestlé’s continued success. In the most recent quarter, Nestlé reported organic sales growth of 3.9%, the highest in three years. And the company continues to reward shareholders – it has raised its dividend for 24 straight years.

As you can see in today’s chart, NSRGY shares are soaring this year. The stock is up about 30% so far in 2019, including dividends… And it recently hit a new all-time high. It’s more proof of what’s possible when you invest in World Dominating Dividend Growers… 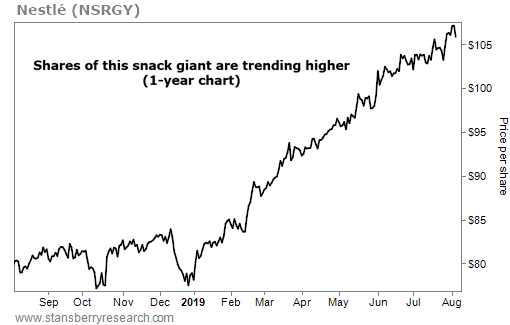