How to Retire With No Savings
By Steve Sjuggerud
Thursday, December 27, 2018

Editor's note: Steve continues this week's "how to live a rich life" series... Yesterday, he shared the ideas that helped him build relationships with some of his heroes. Today, he discusses a way to "retire" that's unconventional, yet rewarding...

"Do you have any savings?" I asked my friend Tony.

"Not really, no," he answered.

Tony is in his 50s. And he didn't sound worried in the least. How is that possible?

I was surprised Tony was so relaxed...

My wife, for example, couldn't consider living like that. She is hardwired to save instead of spend. And even though we have saved and invested well... she STILL worries.

When Tony quit his job, he sold off a good deal of his possessions to finance living his dream.

Tony now builds extremely fine guitars. He has earned critical acclaim. He's doing what he always wanted to do. And he intends to do it for the rest of his life.

A while ago, I visited Tony in Indiana so he could help me build my own guitar... 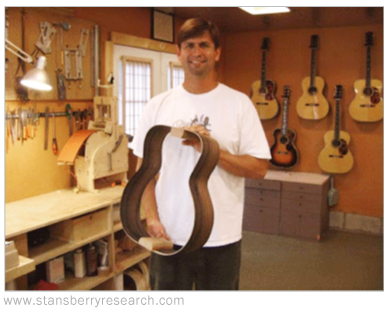 "This is my retirement," Tony said, pointing around his shop.

He had a "good" job as a computer graphic artist. And before that, he worked as a cabinetmaker. But making cabinets or pushing a computer mouse were not what he wanted to do with his life.

Guitars were always his passion. He'd been building and tinkering with them since the 1980s. So he took the leap. If it didn't work, he figured, he could sell off the contents of his guitar workshop and return to being a graphic artist.

I am not as bold as Tony. But I do admire him for following his passion. He took what must have seemed like a huge risk. But now, he's able to say something most people will never be able to say... He's living his dream, doing what he wants to do in retirement.

Tony has "retired" with basically no savings. And yet he is happy, because he has set himself up to do what he loves for the rest of his life.

Is following your dream worth a shot? Can you turn that into a way to make money? If it doesn't work, do you have something to fall back on?

You only live once... Think about it.

"The retirement landscape has undergone vast changes over the past couple of decades," Dr. David Eifrig writes. Get the details on his "three phases" of retirement planning to help you live the life you want right here.

"America needs to get serious about planning for retirement," Doc says. Learn more about one way to set up extra income in retirement here: Don't Waste This Retirement Opportunity.

Market Notes
'INVESTING IN VICE' TAKES A HIT... AT LEAST FOR NOW

Like it or not, investing in businesses that sell physically addictive products has generally been a winning move. For years, habit-forming products like fast food, coffee, and booze have kept customers coming back… But what happens when consumer tastes change?

Fewer Americans are smoking than ever before, according to the Centers for Disease Control and Prevention. That’s partly due to the growing popularity of e-cigarettes – or “vaping.” The three largest publicly traded tobacco companies, British American Tobacco (BTI), Altria (MO), and Philip Morris (PM) – are feeling the pressure. And to top it all off, in March, the U.S. Food and Drug Administration announced a proposal to limit nicotine levels in cigarettes to curb addiction…

As you can see, this announcement hit these tobacco stocks hard. Each has dropped by double digits over the past year. And all three recently hit new 52-week lows. As today’s consumers pick up new vices, tobacco giants have their work cut out for them… 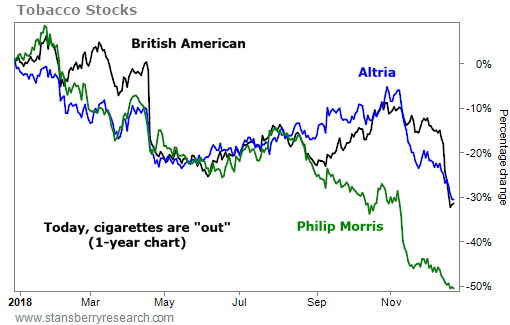