How I Went From Being a Classic Value Investor to a 'Make Money' Investor
By Whitney Tilson
Wednesday, April 24, 2019

I had it backwards my whole career...

For most of my time on Wall Street, I was an old-school value investor. That meant I dug through the "bargain bin" looking for stocks that traded at low multiples of their earnings or other key metrics.

Of course, I cared about the quality and future growth prospects of the companies I invested in, but to me, that part was secondary.

The problem was, the cheap stocks were usually cheap for a reason... because the underlying businesses were crummy. So the seemingly cheap stocks turned out to be value traps – they just went down and down as the businesses declined.

If you're a frequent DailyWealth reader, you know where this is going. As my friend Steve mentioned recently, I've changed – and improved – my approach to investing and how I pick stocks.

You see, falling for value traps is just one of the four mistakes that tend to plague classic value investors. The other three are:

I'll confess – despite all of my successes during my 20 years in the market, I've made every one of these errors.

I want to emphasize, however, that the lesson here is not to just do the opposite and buy the stocks of great growth companies irrespective of valuation. Growth investors frequently make four mistakes that are, in many ways, reflections of the ones value investors make:

The truth is that both quality and price matter... But they're not equally weighted. I estimate that 75% of what determines a stock's performance over time is how the company performs, and only 25% of it is the valuation at the time of purchase.

That's why I changed my approach.

Today, rather than a classic value investor, I call myself a "make money" investor – meaning that I try to combine the best of value and growth investing.

I believe it's a great way to avoid the common pitfalls of both sides, while investing in better businesses right from the start.

So stop digging in the bargain bin. Instead, look for high-quality companies and wait until you can buy their stocks at a reasonable price. If you are smart, courageous, and patient, you will crush the market.

Editor's note: Last week, Whitney went on-camera to discuss a powerful investing strategy... one he used to grow his hedge fund from $1 million to $200 million. If his latest big market prediction proves true, it could help you double or triple your money in the years ahead... To find out more, watch the replay online – while it's still available – right here.

"Over the past decade, you could have done pretty well just by throwing a dart at a list of stocks," Whitney writes. Investors have done well in this bull market... But they could have outperformed by following three lessons Whitney learned over his nearly 20-year investing career. Learn more here.

"You can make a lot of money if a stock or industry goes from being terrible to mediocre... mediocre to OK... OK to good... or good to great," Whitney says. Get the details on a real-life example where he made big gains in a sector poised for a turnaround right here.

Market Notes
LOOK OUT, NETFLIX... THE ULTIMATE MEDIA EMPIRE IS TAKING ON STREAMING

Today, we check in on a familiar name with near-universal appeal…

Longtime readers know we keep an eye out for companies with “Trophy Assets.” These one-of-a-kind assets give their owners a huge advantage over the competition. We can see this by looking at one company’s enduring media empire…

Disney (DIS) is a $240 billion entertainment giant. Its Trophy Assets range from its catalogue of movies and TV shows to world-class theme parks… And now, the company plans to use them to compete with streaming giant Netflix (NFLX). Soon, you will only be able to stream many of Disney’s movies and shows – including Star Wars and Marvel content – on its exclusive service, Disney+. Two weeks ago, the company revealed the official release date… It said Disney+ will launch November 12.

As you can see in today’s chart, DIS shares spiked on the news. The stock is up more than 30% over the past year, and it just hit a new all-time high. It’s more proof that investing in Trophy Assets can produce stellar returns… 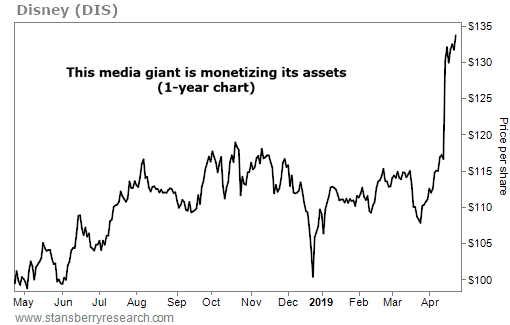