The wonders of our modern lives all result from trade, whether between nearby communities or far-flung nations.

You can afford more calories, light, energy, processing power, and travel more miles than the richest person in the world 200 years ago. Infant mortality and death from infectious diseases have declined. As Matt Ridley writes in his 2010 book The Rational Optimist: How Prosperity Evolves...

Today, of Americans officially designated as "poor," 99 per cent have electricity, running water, flush toilets, and a refrigerator; 95 per cent have a television, 88 per cent a telephone, 71 per cent a car and 70 per cent air conditioning. Cornelius Vanderbilt had none of these.

Trade allows for specialization. Specialization increases efficiency. Increased efficiency raises the amount of wealth we all get to share. But for some reason, this has been forgotten... And trade has come under fire from a small group of misguided politicians.

The uncertainty created by the U.S.-China trade war has led businesses to put investments on hold and investors to leave stocks behind. They can't predict the next quarter's earnings.

We don't know what will happen with the trade war, either... But we do know that the broad sweep of history favors trade between nations.

So today, I want to talk about one of the most misunderstood ideas related to global trade... the trade deficit.

It used to be that countries considered the trade deficit as a measure of their health. So far in 2019, we've imported $301 billion worth of goods from China, but have exported only $70 billion to the country. Therefore, China must be "ahead" by $230 billion.

Under this framework, we're sending money to China... so we must be getting poorer.

As an economic framework, this is called "mercantilism." It has been around a long time. During early trade between Britain and China, the Brits imported loads of tea, but the Chinese only wanted a few knickknacks in return. That led to a steady flow of silver from West to East. In order to drum up demand for something other than money, Britain promoted the opium trade.

The problem is, mercantilism is just plain wrong. A trade deficit is not a negative.

The most intuitive way to demonstrate this is to imagine we hire a shrewd negotiator to send us twice as much stuff for the same amount of exports. We'd be getting much more, for much less... but our trade deficit would be huge.

The trade deficit arises from U.S. consumers and businesses buying stuff they want with their own money. When you buy anything, you usually consider it worth more than the price you paid, or you wouldn't buy it.

If we get $301 billion worth of stuff we want from China, while sending it much less... then we're winning the "stuff surplus."

We've known this since the birth of economics. As Adam Smith wrote in 1776 in The Wealth of Nations, the founding text of economics: "Nothing, however, can be more absurd than this whole doctrine of the balance of trade, upon which, not only these restraints, but almost all the other regulations of commerce, are founded."

He spent an entire chapter laying out the "unreasonableness" of mercantilism.

If that's not enough, David Ricardo explained why this is so in what's often considered the second treatise of economics, On the Principles of Political Economy and Taxation, in 1817.

Ricardo outlined the concept of "comparative advantage," which shows countries can all do better by focusing on producing the goods they can produce best and then trading them. (He also devised the thought experiment I mentioned above by stating, "We should have no greater value if, by the discovery of new markets, we obtained double the quantity of foreign goods in exchange for a given quantity of ours.")

Even as late as the 1970s, free-market economist Milton Friedman tried to explain...

The gain from foreign trade is what we import.

Trade isn't without some downsides. The growth in wealth doesn't accrue to all evenly, which widens income inequality. Importing goods can also lead to instability when you rely too much on one trading partner.

But ultimately, trade produces gains, growth, and an improving standard of living. And that's what we're all after.

Lest you think our economists, businessmen, and politicians have forgotten the last 200 years... they haven't. Agreement over trade exists across the ideological spectrum. Democrats and Republicans, liberals and conservatives, socialists and capitalists all understand that free trade can boost wealth.

That's why the trade war will end.

A return to normalcy in international trade covers about 95% of all possible outcomes. It's just a matter of how long it may take.

Both sides have hinted that plans are in motion to sign at least a partial agreement as early as this month. Just yesterday, the U.S. and China agreed to remove additional tariffs in stages once a deal is signed.

Both countries have also been showing signs of slowing growth as a result of the trade war. Weak September manufacturing data ratcheted up U.S. recession fears, and China recently saw industrial output growth fall to a seventeen-and-a-half-year low.

That puts pressure on both countries' leaders to make a deal.

It might happen this month... or next month... or it may take longer. But eventually, the U.S. and China will have to work out an agreement. Even a small-scale deal centered around China buying more agricultural products and the U.S. delaying planned tariff increases will be a victory for the market.

And that means right now, to a contrarian with a long-term view, the instability created by the trade war is clearly an opportunity.

Editor's note: If Doc's essay piques your interest, there's something you should know... Right now, Steve Sjuggerud is sharing an urgent announcement about China's stock market. On November 27, nearly every major bank on Wall Street will buy into a specific list of Chinese stocks... with long-lasting ramifications. To learn why contrarian investors could potentially double their money in China in the coming years, check out Steve's message here.

"All the signs say we should expect a deal soon – possibly within weeks," C. Scott Garliss says. He believes this time, the good news could stick... for three key reasons. Read more here.

"China opening up to foreign investments hasn't been getting headlines," Brian Tycangco writes. "But it's changing everything about China's stock market. And it's changing for the better." Learn more about China's evolving financial markets right here.

Market Notes
THIS BANKING STOCK IS GROWING ALONG WITH THE ECONOMY

Regular readers know that a good way to check on the health of our economy is to take a look at our financial institutions. If banks are doing well, it’s because folks are able to spend money, invest money, and service their debts. And today’s company shows that America’s economy is going strong…

Bank of America (BAC) is a $300 billion banking behemoth. It serves 66 million consumer and small-business clients across the U.S. And it’s the No. 1 lender to small businesses. With eight different business segments, it helps people and corporations with a broad range of financial services. Right now, business is chugging along… In its most recent quarter, Bank of America beat analysts’ estimates and returned more than $9 billion to its shareholders.

As you can see, BAC shares are up roughly 100% over the past four years, including dividends. And as the economy continues to thrive and people keep buying and borrowing, that trend should continue… 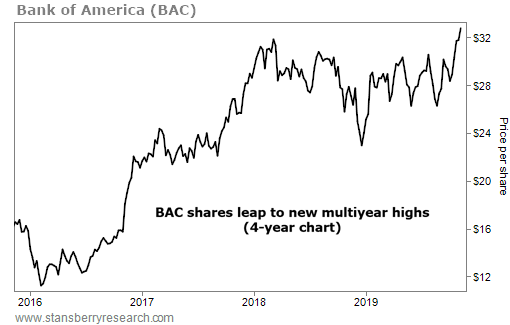