Recent inflation data is promising... but we're not out of the woods for a recession just yet.

The producer price index, a gauge of wholesale prices, fell on a monthly basis for the first time in two years in July.

The consumer price index looks encouraging too. This index tracks what folks typically pay for goods and services. It undershot expectations in July... after laying flat for two consecutive months.

Gas prices are falling, too... And investor fear is starting to abate.

This all looks optimistic. But the Federal Reserve is staying hawkish.

In June, the Fed enacted a 0.75% interest-rate hike – the largest in 28 years. It imposed another in July.

"We need to see that inflation is actually turning around [...] and in a convincing way coming lower, not just a tick lower here and there," he told CNBC.

That means more jumbo-sized rate hikes are on the table. And one well-known indicator suggests the Fed may squeeze us into a recession...

There's one recession signal that economists obsess over... And it's flashing red today.

It has only lit up 28 times since 1900. In 22 of those instances, a recession followed. I'm talking about the yield curve... This measure shows the spread between long-term vs. short-term bond yields. And when it goes negative, a recession usually follows.

That's because the longer you tie up your money in a government bond, the more interest you should earn. So 10-year bonds yield more than two-year bonds... usually.

But when the bond market expects tough times, long-term rates tend to fall. That's because investors want the safety. Short-term rates don't always do the same though.

When this setup gets out of whack, and short-term rates move above long-term rates, you know there's something weird going on in the economy. And again, a recession is usually on the way.

Specifically, the yield curve is the spread between long- and short-term bond rates. It's determined by subtracting 10-year yields from two-year yields. When the curve inverts, everyone is paying a premium for safer long-term bonds.

That's the signal that suggests a future recession. It shows there's trouble in the economy. And that's what we're seeing today. The curve is now at its lowest point in 22 years. Take a look... 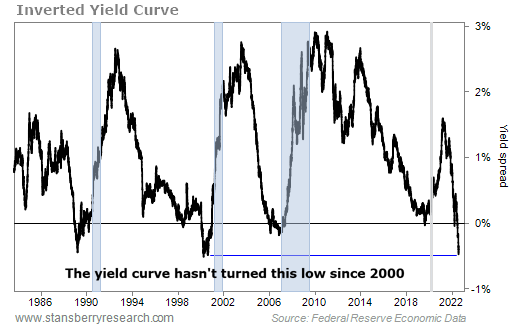 The yield curve is as inverted as it was a month after the dot-com bubble peaked.

Those shaded areas in the chart are recessions. You'll notice that they follow after the curve dips below zero.

Our chart only covers the four most recent recessions. But the last six times the yield curve inverted, it took between six months and three years on average for a recession to start.

So, while the inverted curve is ominous, it's not the final word. An inversion won't cause a recession... It just suggests one is coming.

The Fed should note this inversion carefully. Investors should too. If we see another broad stock sell-off without an improvement in inflation, we'll want to get defensive quick.

But based on the yield curve, the Fed's rate hikes are looking more and more like a game of chicken... And the U.S. economy hangs in the balance.

"We all need to learn to live with much higher inflation," Mike DiBiase wrote in May. "That's because the Fed can't win the battle against inflation without losing the war." Find out why he predicts a recession this year – and what that means for you – right here.

"There are two major positives of a market like today's," Brett Eversole writes. Stocks have been volatile this year, and the pain might not be over yet. But a bearish environment paves the way for big gains ahead... Read more here.