A Rare Buying Opportunity in This Hated Sector
By Brett Eversole
Thursday, May 2, 2019

It's crazy to think about. But the right political rhetoric can quickly sink a sector.

But remember, political rhetoric is just that... rhetoric. It doesn't mean changes are certain. And when it crushes a major industry, it creates an opportunity.

Health care stocks were beaten down recently after political calls for "Medicare for All." Folks are worried about the future of this major industry. And prices have suffered.

So we have to ask ourselves, is this the end of the health care industry as we know it? Or have investors overreacted... giving us a rare opportunity to buy?

History says the second scenario is far more likely. And we could make double-digits profits by acting now.

The health care sector had been on the rise. Then the rhetoric kicked in.

Now, the overall market is hitting all-time highs, and health care stocks have lagged. They even fell 7% in just a few days last month.

But history says the recent fall is overdone... and profits are likely from here.

Simply put, the sector recently hit major oversold levels. It moved too far, too fast, based on the relative strength index (RSI).

The RSI is a simple tool. It tells us when investors have gotten ahead of themselves in one direction or another. And when that happens, a reversal is likely.

If a stock falls into oversold territory – below an RSI level of 30 – a rally is likely to ensue. And that's what just happened in the health care sector.

The recent decline pushed health care stocks into oversold levels. You can see it in the chart below... 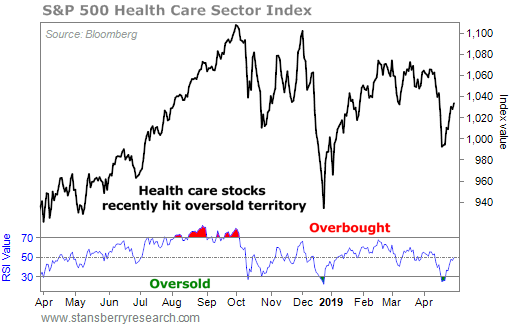 This was a major oversold reading. The health care sector didn't just fall below an RSI of 30... It kissed a level of 25.

That's a rare event. But going back to 2000, it has actually led to big upside. The table below shows the details...

The health care sector has been an OK performer since 2000... returning around 5% a year. But buying when the sector is beaten down and completely oversold tends to lead to much better gains.

Similar instances led to 5% gains in three months, 7% gains in six months, and an impressive 11% gain over the next year. That's solid performance and roughly double the typical return for the sector over the same time frame.

Of course, we don't know if the current political rhetoric will turn into something more. But it certainly won't do so anytime soon.

That means the recent panic is likely overdone. And health care stocks are a smart bet right now.

One simple way to own the sector is the Health Care Select Sector SPDR Fund (XLV). This fund tracks the overall sector. And importantly, it has already started rising off last month's lows.

History says those gains should continue. And we could see 11% upside over the next year. It's an opportunity worth considering now.

"Several years ago, I became bullish on an idea that the rest of the market had left for dead," Whitney Tilson says. "You may have to look closely for these opportunities, but it's well worth your time." Read more about how he made big gains in a hated sector right here.

"We are in the late stages of a massive wealth-creation event," Steve writes. "When it's over, we likely won't see another opportunity like it for decades." Investors have given up on this market after a brutal 2018... but Steve is bullish today. Learn more here.

Market Notes
THIS COMPANY STRUGGLES WHEN YOU SHOP ONLINE

Today’s chart shows a company stuck in a dying industry…

Americans increasingly prefer to shop online, rather than drive to a shopping mall… where you have to hunt for parking, root through jumbled inventories, and stand around waiting in lines. While some brick-and-mortar stores are taking smart steps to survive, many others have been closing their doors. That’s bad news for today’s company…

Tanger Factory Outlet Centers (SKT) is a troubled mall landlord. Its portfolio of properties includes 44 different malls, where about 530 different retailers lease 3,100 individual stores. Last year, it lost tenants for 126,000 square feet of retail space… According to Tanger, those retailers scaled back their brick-and-mortar footprints or folded altogether. Meanwhile, the company’s net income plummeted 37% to $42 million.

As you can see in the chart, SKT shares have lost almost half their value over the past three years. They recently sank to a new multiyear low. As retailers continue to struggle, many malls will die… and Tanger shares will continue to slide… 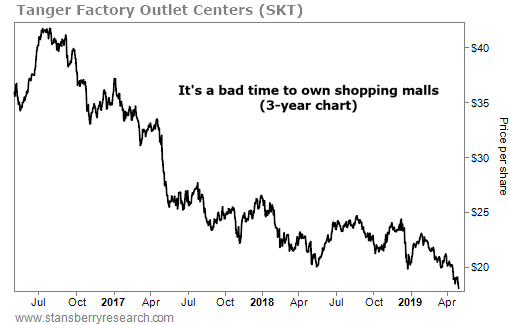