A Shuttered Fund Tells Us This Boom Can Continue
By Brett Eversole
Tuesday, November 23, 2021

"ETF companies are not in the business of helping investors," J.C. Parets said on a recent episode of The Compound and Friends financial podcast.

He went on to explain...

ETF companies are in the business of giving investors what they want. If there's demand for an oil ETF, they're going to build one for you.

J.C. is a chartered market technician and the founder of All Star Charts, which shares analysis for financial professionals. His point is simple. But it's one most investors overlook...

As I'll share today, it's a powerful way to view sentiment in the markets. And right now, it's pointing to a big opportunity in a specific group of stocks.

It's easy to assume the companies that create exchange-traded funds (ETFs) are looking out for the folks who buy into them. But these firms are simply fulfilling market demand.

You can launch an ETF built around any sector or investment theme. If folks want to buy it, it's out there.

These two competing funds track the homebuilders sector. And they came to market near the peak of the housing boom... at a time when everyone wanted to bet on a spectacular bubble in home prices.

The problem was, the bubble was about to burst. XHB fell more than 80% in its first three years of existence. ITB fared even worse... It dropped nearly 90%.

Launching a homebuilders fund in 2006 was a terrible idea for investors. Anyone who bought at launch lost most of their capital in the years that followed. But iShares and SPDR didn't launch those funds because it would be great for investors. They did it because it was a great idea for them...

By May 2008, the two funds had brought in around $1.5 billion in assets. And that's despite the fact that prices had fallen by more than 50%.

Said another way, investors continued to pour money in at the worst possible time. Prices crashed... even as more and more cash flowed in.

That's just one side of the contrarian equation though. As J.C. pointed out, the opposite is also true...

If there's no demand for an ETF, they shut them down. And they have an uncanny ability to do that just when you need them most.

Again, no one cared about coal stocks. So VanEck closed the fund... But investors sure wish that it didn't. That was the perfect time to own those stocks.

Today, a similar setup is taking place. That's because the VanEck Vectors Unconventional Oil & Gas Fund (FRAK) shut down last month. And it's the perfect example of J.C.'s idea in action...

The fund held a basket of companies involved in fracking and oil-sands operations. It launched in 2012, after the price of oil had roughly tripled off its 2009 low.

Now, to be fair, FRAK did perform well for a couple of years. But it peaked in 2014, alongside oil prices... and crashed roughly 90% to last year's lows. Take a look... 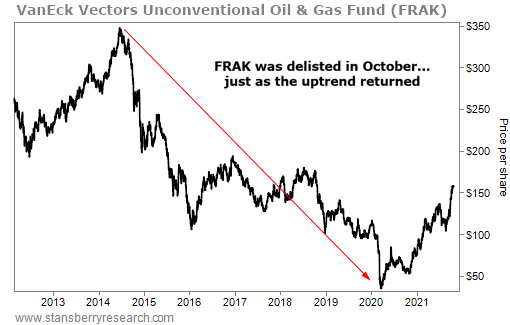 It's the same pattern. FRAK launched near the top for oil and oil stocks. And now it's delisted... just when we need it most.

As you can see on the right side of the chart, the fund had soared from its 2020 bottom. It was up around 300%. That has everything to do with the boom we've seen in oil prices – a boom that my colleague Steve Sjuggerud believes can continue.

Oil recently hit seven-year highs and rose above $80 a barrel. In Texas – where many fracking companies operate – we've seen the number of oil rigs rise from 100 to 264 today. But that's still a far cry from the all-time high of 900 rigs in the state.

What this all means is that oil is absolutely booming... but it can keep booming from here. This bull run ain't over yet!

Investors don't seem to care, though. No one was putting money into the fund. So, the folks at VanEck closed it. And importantly, they didn't do it because investors shouldn't own those companies... They did it because it was a better business move for them.

History shows that this is an incredible tell for us, as investors. It means oil stocks are hated... but that now is exactly the right time to get in.

FRAK, again, is closed. But there are plenty of other ways to bet on this powerful oil boom. Don't miss it.

"Every once in a while, you can catch a beaten-down market and safely make short-term gains," Chris Igou writes. We're seeing that opportunity in another group of stocks lately. And it could mean a quick jump higher over the next three months... Read more here.

"When this group of traders is betting heavily in one direction, the opposite is likely to occur," Chris says. Right now, futures traders are betting heavily on lower prices in this commodity. But we could see a double-digit rally as a result... Learn more here.

Today’s chart shows the power behind an iconic brand…

Regular readers know we’re always on the lookout for uptrends in shares of well-known brands. Customers stick with the brands they know and trust, even if it means paying more for their favorite products… or lining up for new releases. Today’s company has a name that everyone loves…

Apple (AAPL) is a $2.6 trillion consumer-electronics giant. It has made some of the most popular devices in the world… like the iPhone, iPad, and Apple Watch. It recently launched the iPhone 13, and folks were quick to snap up the new tech. This unparalleled customer loyalty is paying off… In the most recent quarter, Apple pulled in quarterly revenue of $83.4 billion – up 29% year over year. Although that missed expectations, it was a record for the period… And Apple expects its December quarter to be the company’s largest ever in terms of revenue.

As you can see, AAPL shares are up roughly 150% over the past two years. They recently hit a fresh all-time high. As long as Apple’s name attracts loyal fans, this uptrend should continue… 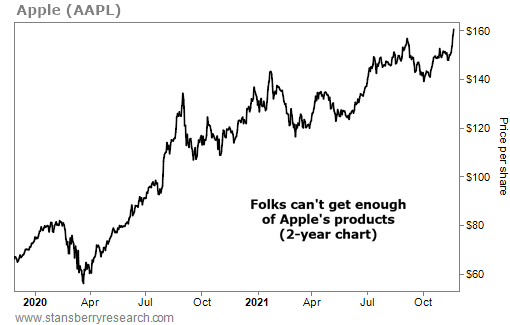