Commodities have been booming. Oil recently hit a seven-year high, as I highlighted last week.

Still, not everything is soaring. Platinum is down 20% since peaking in February. And after that consistent fall, investors have been jumping ship.

In fact, traders recently became the most bearish they've been on platinum in years. This negative sentiment is telling us something important...

It's telling us that the bottom is likely close – and big gains in platinum could be right around the corner.

Investors can only take so much. Eventually, sustained losses force them to sell. And when it happens en masse, the negative sentiment can be telling.

That's happening right now to futures traders in the platinum market. And now, bearish bets on the metal are stacking up.

We can see this through the Commitment of Traders report for platinum. Each week, it gives us an inside look at what futures traders are doing with their money.

Importantly, when this group of traders is betting heavily in one direction, the opposite is likely to occur.

They recently bet against platinum at extreme levels. And that means a rally is likely. Take a look... 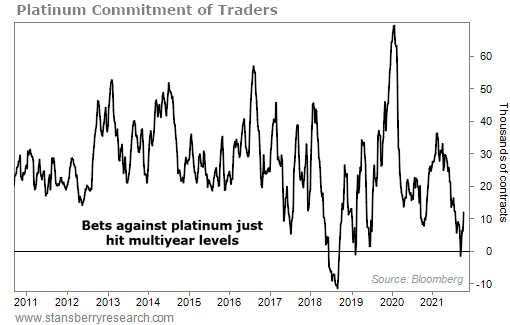 They've even been actively betting that the downturn will continue. But following their lead has been a bad idea historically.

After peaking in February 2012, platinum fell sharply in just a couple months. By May, it was down 17%. Traders turned against the metal and started making big bets against it.

But betting against platinum in late May 2012 was a terrible idea. It jumped 19% to its February 2013 peak.

We saw a similar story play out in mid-2017. Platinum quickly dropped 13% from late February 2017 to early July. Sentiment turned sour. And speculators once again started betting on that downturn to continue.

But from mid-July 2017 to late January 2018, platinum rallied 15%. Again, making bearish bets alongside futures traders was a bad idea.

The most recent example resulted in the biggest move to the upside. Bearish bets on platinum hit an all-time record in September 2018. You can probably guess what happened next...

Simply put, betting alongside these traders when they're all bearish has historically been a bad idea. Instead, you should use them as a contrarian tool.

Today, that means platinum could take off in the short term once again. The simplest way to make the bet is the Aberdeen Standard Physical Platinum Shares Fund (PPLT). This simple fund holds a stockpile of platinum and tracks the moves in the metal.

Given today's setup, a double-digit rally is possible. And that makes PPLT a fund to consider now.

"Nobody wants to buy at the peak of a rally," Chris says. Most folks think that all the gains have already been made when a sector starts to soar. But history shows that buying into a strong uptrend can often lead to further gains... Read more here: Oil Hits a Seven-Year High... With More Gains to Come.

"When the entire crowd is making the same bet, it's smart to do the opposite," Chris writes. Investors are ignoring this commodity. But that might be the wrong move right now... Get the full story here: This Beaten-Down Commodity Is About to Soar.

Market Notes
IT'S A BULL MARKET IN 'TINY CHIPS'

Longtime readers are familiar with the “tiny chips that power the world.” They’re in everything from laptops and cellphones to cars and airplanes. They’ve become such a central part of everyday life that the global semiconductor industry is expected to grow to $551 billion by the end of this year. And that’s great news for today’s company…

Broadcom (AVGO) is a $210 billion semiconductor designer and manufacturer. It produces chips for critical markets such as 5G infrastructure, the cloud, broadband, and wireless technology… and boasts big-name partners like Google. With the ever-growing demand for chips, business has been booming… In the most recent quarter, Broadcom reported record revenues of $6.8 billion – up 16% year over year. Even more, the company expects this momentum will remain strong in the coming months.

As you can see, AVGO shares are climbing today. The stock is up 90% over the past two years, recently hitting a new all-time high. And as long as folks rely on semiconductors to power our everyday lives, the bull market in tiny chips should continue… 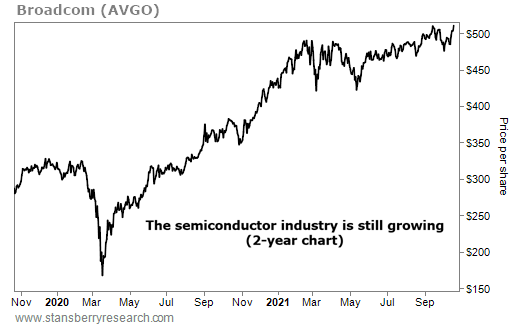