U.S. stocks are darn expensive. There's no disputing that.

We're in the middle of a market Melt Up. And the incredible gains we've seen – along with an economic slump that slowed earnings – have pushed valuations to incredible heights.

Specifically, the S&P 500 Index is trading at its highest valuation since the dot-com peak in 2000.

The S&P 500 trades at a price-to-earnings (P/E) ratio of more than 30. It rose above that level for the first time in two decades earlier this month.

Now, while high valuations are a warning sign... they are not a signal that a crash is imminent.

In fact, high valuations are a good thing in a market like the one we have today. And they could rise even higher as the Melt Up continues.

The P/E ratio is one of the easiest ways to value a market. It's a gauge of how much you are paying for the amount of earnings you receive in return. The higher the P/E ratio, the higher the "price tag" for stocks.

Today, valuations are near record highs based on this common measure.

This is exactly what you'd expect during a Melt Up like we're experiencing today. Investors buy into the incredible rally, no matter the price. This drives valuations through the roof. 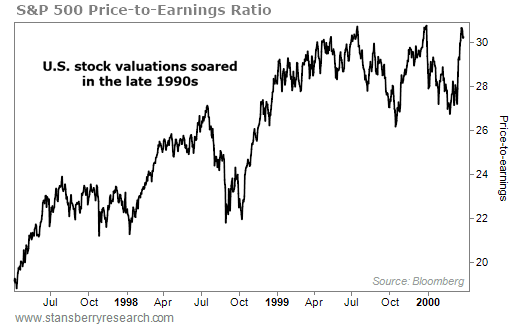 But panic-selling then would have been a terrible mistake. Those high valuations didn't cause a crash.

The market's P/E ratio was at or near 30 for an entire year leading up to the 2000 peak. And that goes to show, high valuations can last for a while... and get even higher in the meantime.

Today, the broad market has only been at 30 for a few weeks. So yes, U.S. stocks are expensive. But they can remain expensive for longer than you think. And the market could rally much higher before an eventual peak sets in – with huge gains for individual stocks.

It's important to keep an eye on valuations. But they're not a reason to flee to safety just yet.

Instead, with the trend in our favor, the smart move continues to be staying long stocks.

"You might not believe it," Chris says. "But trends are a powerful investing tool." Following the trend is one of the easiest ways to make money in the market. And this particular sector of the market is poised for even more explosive gains ahead... Get the full story right here.

"Investors are piling back into this sector in a big way," Chris writes. The Melt Up is finally here. And this "leading" indicator for the economy tells us that we can expect gains to continue racking up from here... Read more here: Sentiment Hits a Multiyear High in This Crucial Sector.

Today, we’re checking in on a company that’s riding the tech trend higher…

The world is relying heavily on electronics these days… from smartphones, to laptops, to televisions. That’s why semiconductors – the tiny but powerful chips that make each of those devices work – are such a crucial part of our lives. That’s good news for today’s company…

Broadcom (AVGO) is a $185 billion semiconductor designer and manufacturer. Its chips appear in many of our favorite devices. And just last week, the company announced that one of its chips enables the world’s first Wi-Fi 6E phone, the Samsung Galaxy S21 Ultra. This chip enhances phones’ speed, connectivity, as well as gigabit capacity – which are also important improvements to make in the 5G rollout that’s taking place right now.

As you can see, AVGO shares are surging today. The stock is up more than 160% since its mid-March lows. And as folks snap up the most advanced technology, semiconductor companies like Broadcom will continue providing the components these faster devices will need… 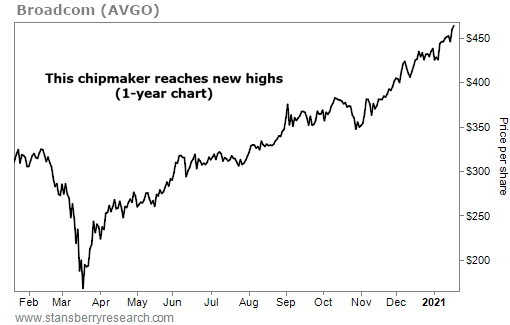