This Beaten-Down Commodity Is About to Soar
By Chris Igou
Tuesday, September 21, 2021

When the entire crowd is making the same bet, it's smart to do the opposite.

That's the simplest description of contrarian investing. It works because once everyone believes in an outcome, there's no one left to keep pushing prices in that direction.

Today, we see that happening in a certain commodity. The bearishness started earlier this year. And it's only gotten worse in recent months.

Now the setup is the craziest we've seen in nearly two decades. And it means this beaten-down commodity is on the verge of a major move higher.

Bearish bets on palladium hit crazy levels in May 2020...

Folks were the most bearish they had been on the metal in over a decade. As I explained in DailyWealth, record bearish bets often mark a turning point in a trend... and a rally in the metal was likely.

Palladium took off after that initial signal... for a 56% gain in a year. And now, the metal is set up to do it again.

Investors are betting against palladium at crazy levels once more. We can see it through the Commitment of Traders ("COT") report for the metal.

That's because collectively, these traders are terrible market timers. If they're all betting in one direction, the opposite is likely to occur.

Today, bearish bets on palladium are the highest they've been since 2002. Take a look... 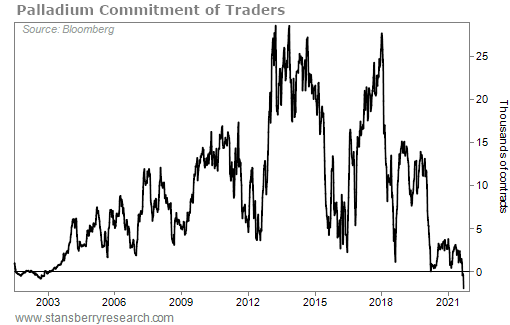 You can see bearish bets on palladium hit a nearly two-decade low late last month. Futures traders have given up on the metal in record numbers.

We've seen similar setups throughout the years, most recently in 2020. And each time led to fantastic upside. Check it out...

Again, the COT report showed wildly bearish bets on palladium four times in the past decade. But rather than falling further, the metal took off in each case...

Palladium climbed 33% following extreme bearishness in 2012. That was followed by two similar cases, each of which led to 60%-plus rallies in the metal... not to mention the 56% move after last year's opportunity.

In short, sentiment toward palladium is as bearish as it gets. And if history is any indicator, a rebound in the metal is likely.

You'll want to wait for palladium prices to rebound before buying. They're still trending lower right now. But once that happens, be ready for a big surge higher.

The COT report is one of our favorite tools for contrarian investing. It shows when traders are getting too bearish or too bullish... signaling a reversal is likely. Recently, it pointed to one commodity that could be poised for a decline... Learn more here.

"If you catch these breakouts in real time, they can lead to big outperformance," Chris writes. A recent signal in the markets shows big upside potential in one group of stocks. It's an area of the market you might be ignoring... Read more here.

Today, we’re looking at a company that’s grabbing up subscribers…

Regular readers know we’ve written about the power of recurring sales. One great way to harness that power is through subscription models, where customers “rent” continued access to services. This leads to more consistent revenues. And one media company is pivoting to this model…

Shutterstock (SSTK) is a $4 billion provider of stock photography, videos, and music. It helps businesses around the world license the media that they need for their own communications. The company is aiming to bring in more users as regular subscribers – an approach that drove sales higher last year… From 2019 to 2020, Shutterstock’s subscribers grew by 45% to 281,000 and subscriber revenue grew by 12% to $265.3 million. And with 321,000 subscribers as of the latest quarter, this growth has continued.

As you can see, SSTK shares have taken off as well. The stock is up 220% in the past 18 months, recently hitting a fresh all-time high. As long as companies around the world pay for access to licensed media, Shutterstock’s success should continue… 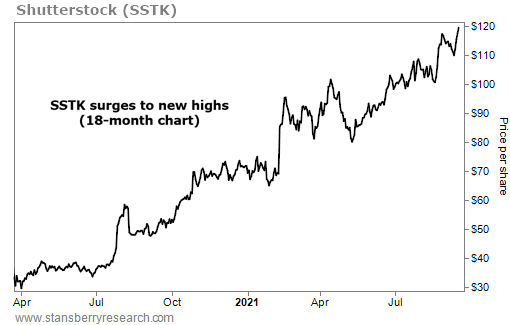