A Wave of New Money Is Set to Fix the Power-Grid Crisis
By Steve Sjuggerud
Tuesday, August 31, 2021

The crisis started during one of the worst winter storms in the region's history...

Millions of people lost power for days. Temperatures hit negative 2 in some places... and hovered around the teens and 20s in most areas. Folks scrambled to find ways to keep warm. Some even sat in their cars just to warm up – which can be extremely dangerous if you breathe in exhaust fumes.

Hospitals are hectic enough when operating at full capacity... and many were already stretched to their limits due to COVID-19. These outages meant that on top of dealing with the pandemic, many hospitals had to go without the most basic essentials.

It's a crazy story. And it has major investment implications. But before we get to that, we need to understand how this crisis occurred...

Now, I've been in foreign countries where power outages occur regularly. These are typically underdeveloped nations where the infrastructure for power and water is almost nonexistent.

Sometimes, clean running water isn't an option in these areas. You need access to bottled water to ensure it's safe to drink. But this massive power outage didn't happen in a third-world country...

It happened right in the heart of America.

In February, Texas went through an extreme cold snap. Temperatures hit the lowest level we've seen since 1949. And record snowfall came down as well.

The state's infrastructure wasn't able to handle such a dramatic winter storm. Texas is used to milder weather... And the lack of insulation and other measures meant the power grid was exposed to ice and freezing conditions.

That's why energy sources like nuclear reactors, coal and gas generators, and wind farms went down. No matter what form of energy you look at, Texas wasn't ready.

The state has struggled with this before. A similar crisis struck in 2011, during another winter storm... Then, it happened again in 2014.

One of the main challenges is the age of the current power grid. The average U.S. power plant is 30 years old. Meanwhile, the average power transformer is more than 40 years old.

This outdated infrastructure is vulnerable to extreme weather events. And it's not just cold...

California has been experiencing the same situation as Texas... for the opposite reason.

Extreme droughts in the state are causing massive blazes. The 2020 wildfires destroyed roughly 4.4 million acres. Hundreds of homes burned down.

Governments around the state shut down electricity to prevent "high risk" power lines from sparking other fires. In fact, several of the wildfires were caused by downed power lines.

Today, Congress is trying to fix the problem. That's through the $73 billion currently included in the bipartisan infrastructure bill that recently passed in the Senate.

Out of $1 trillion overall, that $73 billion will go toward making sure the power grid is equipped to handle extreme weather.

The House of Representatives still needs to pass the bill. But that seems likely based on the updates coming out of Washington. It would be one of the first pieces of bipartisan legislation to pass in years.

Here's an excerpt from the White House's fact sheet about the deal (emphasis added)...

It upgrades our power infrastructure, including by building thousands of miles of new, resilient transmission lines to facilitate the expansion of renewable energy.

In the end, upgrading our power infrastructure will be great for Americans. If the new transmission lines can withstand drought conditions and extreme cold, companies won't have to worry nearly as often about costly shutdowns.

We'll see a wave of infrastructure investment to make this happen. And it might not take long before it starts... The House expects to vote on the bill as soon as the end of September.

Ultimately, this will be a big win for the economy. And infrastructure companies closely tied to an upgraded power grid could be big winners.

P.S. While everyone is piling into basic infrastructure investments, I've found an opportunity that few have noticed. That makes it the perfect contrarian bet to profit from the news coming out of Washington, D.C. It's in a strong uptrend... And combined with the potential $73 billion cash injection into America's power grid, it's a fantastic, low-risk way to profit.

I just shared its name and ticker in the latest issue of my True Wealth newsletter. You can learn how to gain access – for 75% off the regular subscription price – right here.

Just because a company isn't a household name doesn't mean it can't make major profits. In fact, history says that a substantial rally in this relatively obscure sector could point to solid gains over the next year... Read more here: 16% Upside Potential in a Surprising Sector.

"Instead of falling in love with the recent rally, investors are bailing," Chris Igou writes. Demand for this one market is at a multiyear low. But investors fleeing stocks during a rally is the sort of contrarian indicator we love to see... Get the full story here: Double-Digit Gains Are Possible in This Hated Market.

Market Notes
ONE OF THE LEADERS OF THE SELF-STORAGE BOOM

Regular readers know we love finding big, secular trends to invest in. And these days, the self-storage trend is in full force. Americans love to buy more stuff. And as they run out of space at home, they need a place to store their extra things… which is great news for today’s company…

Life Storage (LSI) is one of the leading U.S. self-storage companies. It employs more than 2,000 people and has around 925 facilities – offering more than 67 million rentable square feet in 34 states. When folks start to run out of room, they turn to this company for more storage… And that’s exactly what we’re seeing today. In the latest quarter, Life Storage reported that same-store revenue increased 14.7% year over year. It also acquired 17 stores, ensuring room for growth.

As you can see, LSI is up roughly 75% over the past two years. And shares recently hit a new all-time high. As long as folks need somewhere else to store their extra belongings, Life Storage is set to benefit… 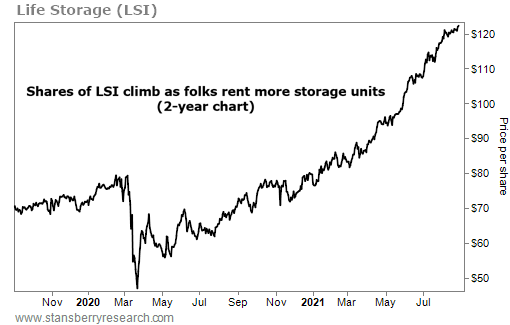