Double-Digit Gains Are Possible in This Hated Market
By Chris Igou
Monday, August 23, 2021

Korean stocks are up 34% over the past year. And yet, folks aren't piling into the trade.

Instead of falling in love with the recent rally, investors are bailing. This isn't what we'd normally expect in a booming market. But it's setting up a great opportunity for those willing to take advantage of it.

You see, shares outstanding for the iShares MSCI South Korea Fund (EWY) are falling hard. They recently hit their lowest level since 2018.

Investors want nothing to do with Korean stocks today. And history shows double-digit gains are possible as a result.

We can't know why investors are bailing. They could be scared of a new surge in coronavirus cases. Or they could be worried that the rally has gone on for too long. But we don't need to know their reasoning...

That's because investors will always find a reason to sell. And this bearishness is often a signal that a rally is likely to follow. That's what's happening right now in Korean stocks.

We can see it thanks to the unique fund structure of EWY. It's able to create or liquidate shares based on changes in investor demand.

When folks love the idea of owning Korean stocks, EWY creates more shares. And when people want out of this market, the fund liquidates shares.

Today, shares outstanding of EWY are the lowest they've been in years. Take a look... 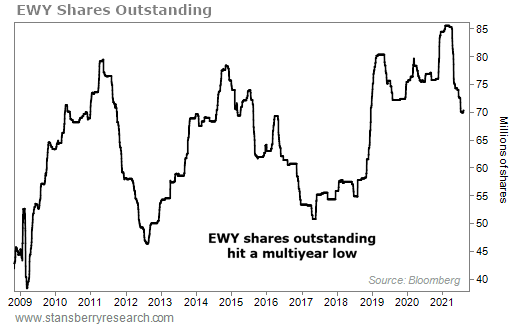 You can see the recent drop in EWY's shares outstanding above. Demand for Korean stocks has crashed since February.

Importantly, this crash in demand is likely a buying opportunity. Similar setups happened in 2009, 2012, and 2017... And each time led to a double-digit rally over the next few months.

In our first example, demand for shares of EWY hit an all-time low in March 2009. We were fresh out of the financial crisis. Folks were still scared about what would happen next. But EWY took off... The fund rallied 68% over the next year.

Our most recent example came in 2017. Shares outstanding for EWY again fell to multiyear lows. Sentiment was the most negative it had been in five years. And you can probably guess what happened next...

In short, when investors are fleeing Korean stocks, history shows it's likely setting up a buying opportunity. And that's happening right now.

If you're looking to add foreign stocks to your portfolio, this is one market you shouldn't overlook.

"Most folks want other people to like and agree with their investment ideas," Ben Morris writes. But when too many people are like-minded about an asset, it's often an indicator that a reversal in the trend is just around the corner... Read more here: Two Ways to Profit as This Consensus Bet Reverses.

"It seems like just about every asset had a banner year in 2020," Brian Tycangco writes. But the good times will eventually come to an end in U.S. stocks. That's why you need to look to other markets to find ways to profit... Get the full story here: This Trend Doesn't Scare Many Americans... But It Should.