Short Sellers Are Wading Back Into This Meme Stock
By Dan Ferris
Thursday, August 19, 2021

Maybe, just maybe, the stock market is starting to return to normal...

I know that's the last thing those who know my work expect me to say.

So don't misunderstand what I mean by "return to normal." I'm still bearish on the overall stock market.

I still feel like a drawdown – even a market crash – is within sight. That's what I mean by "return to normal." And I promise, as painful as it would be for those who aren't prepared for it, a bear market in stocks would be a very good thing in the long run.

The more investors grow accustomed to high valuations getting higher, the more distorted their thinking becomes... the more inclined they'll be to engage in dangerous speculations... and the worse they'll be blindsided when reality reasserts itself (as it always has and always will).

So when I say, "Maybe the stock market is starting to return to normal," I mean that today's valuations are way above normal – and maybe that's all about to change over the next several weeks and months.

Here's one reason why I think we're headed back to more normal valuations...

Some of the most egregious signs of speculative frenzy appear to be behind us.

I'm talking first and foremost about "meme stocks." The most popular one today is AMC Entertainment (AMC).

Today, a little more than two months after becoming a 38-bagger, AMC is trading around $37, a drop of nearly 50%. Shares are still egregiously overvalued, but the fact that they're down nearly 50% is reassuring to me.

It could be a sign that the market feels like it sucked in enough losers and is ready to show them what happens when you have no idea what you're doing.

And now, short sellers – who got burned in the speculative mania – are wading back into the fray...

I noticed that, about a month ago, AMC canceled plans to sell as many as 25 million new shares for proceeds of approximately $1 billion. The Financial Times reported that AMC appeared "to have hit the limit of what its existing shareholders will tolerate."

Then, a report came out that said Odey Asset Management, a fairly well-known hedge fund, had taken a short position in AMC. In a letter to investors, Odey manager James Hanbury told clients that retail investors' frenzied meme stock speculations were among several factors that have "created major distortions" leading to "compelling short opportunities."

You might recall that the meme stocks soared so high so quickly because retail-investor buying prompted large hedge funds to buy, so they could limit their rapidly growing losses in large short positions.

With $4.1 billion under management, Odey is not enormous by today's standards. But the fact its team is willing to step back into the fray tells me perhaps they believe the worst craziness is finally behind us now... that the meme stocks will trade more in line with their business prospects.

Not only that, but famous short seller Jim Chanos said last Tuesday that he has a bet against the stock.

AMC owns movie theaters and has $11 billion in debt. GME owns stores that sell old video-game DVDs. Both businesses have been in decline for a decade or more.

These stocks traded in the ballpark of 0.1 times sales before all the meme-stock nonsense. Today, AMC is around 11 times sales, GME around 2. A return to pre-nonsense levels would send both stocks down to roughly 95% or so below current levels, and closer to 98% or 99% below their meme-era highs.

In this case, I see that the market is getting back to its long-term job of assigning asset prices that reflect the fundamentals...

And I see this as one of the signs that a downturn is on the horizon.

U.S. stocks are bumping against their most expensive valuations in history, according to all the metrics that have correlated most closely with historical returns...

For example, the price-to-sales (P/S) ratio of the benchmark S&P 500 Index has negatively correlated with subsequent 10- and 12-year average annual returns about 90% of the time since 1928.

In other words, when valuations have been high, the returns that follow have been low.

Today, the P/S ratio of the S&P 500 sits at a little more than 3, meaning share prices of the United States' biggest companies are more than three times higher than their sales. That might sound like a lot, and it is...

I could cite plenty of other metrics, but you get the picture. I still expect that at some point, we'll see a drop in the S&P 500 in line with previous all-time high valuations, somewhere between 50% and 65%... and an even bigger drop for many individual stocks.

What should you do? I can answer that question...

Prepare, don't predict. That means holding stocks, bonds, plenty of cash, silver, gold, and maybe a little bitcoin if you're comfortable with it.

Editor's note: Let the rest of the crowd overreact to the headlines... rushing in and out of stocks and cryptos based on every media blip. Dan believes the days of speculative frenzy are numbered. That's why he's revealing a way to build lasting wealth by finding the true value of any investment... including one of his newest picks, which he says could soar 200% or more in the next couple of years. Learn more here.

No matter what the markets are doing, it pays to be prepared. Even the best investors can't know what will happen in the future, so you need to make sure your portfolio is ready for anything... Read Dan's five basic strategies for enduring any market environment here.

Buying up great, mispriced stocks that are "on sale" is a great way to make a lot of money. But for value investors, it's important to learn this lesson: how to tell the difference between an overlooked gem and a value trap... Read more here.

Today’s company profits when folks have too much stuff…

Longtime readers know we love finding big, secular trends to invest in… and one of the biggest in recent years is the self-storage boom. From Baby Boomers retiring and downsizing to millennials moving to cities, folks are looking for space to store their extra things. That’s where today’s company enters the picture…

CubeSmart (CUBE) is a $10 billion real estate investment trust (“REIT”). It owns 547 storage properties, containing 39 million rentable square feet… And it manages 718 more properties, adding nearly 50 million rentable square feet. Over the past year, folks have been lining up to use all that space… In the second quarter, CubeSmart posted net income of nearly $50 million – up roughly 30% year over year. And its occupancy increased to 96.1%.

As you can see in today’s chart, CUBE shares have risen over 60% in the past year… And they recently hit a fresh all-time high. As long as folks need somewhere to store their extra stuff, CUBE’s solid performance should continue… 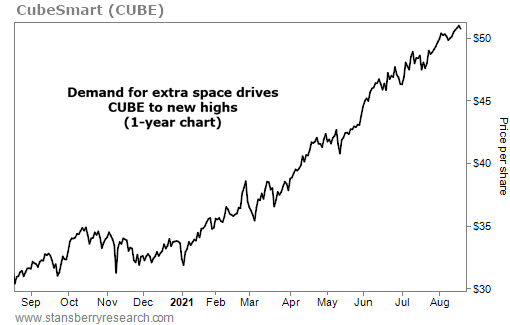