How to Tell Whether a Stock Is a Turnaround or Is Headed for the Trash Heap
By Whitney Tilson
Friday, January 3, 2020

Once you've been around the block a few times (or, in my case, a few decades), you realize that investing is all about pattern recognition.

Human irrationality – things like fear, greed, following the herd, and overreacting to vivid, recent events – never changes, so investment opportunities today often resemble those of the past. As legendary author Mark Twain is reputed to have said, "History doesn't repeat itself, but it often rhymes."

Let's look back to the first quarter of 2003... At the time, our nation was still feeling the effects of the 9/11 attacks, and the Bush administration was looking for revenge. In October 2002, the administration persuaded Congress to authorize the use of military force against Iraq. By March 2003, 150,000 U.S. troops invaded the country.

In the lead-up to the invasion, there were widespread fears that it could be a long, costly war and that Iraqi President Saddam Hussein might even use weapons of mass destruction.

As a result, oil prices spiked and the stock market tanked, giving back nearly all of the gains in the brief fourth-quarter rally in 2002. Among the worst-performing sectors were retailers, as investors feared they would suffer from weakening consumer spending.

When U.S. forces quickly ousted Saddam Hussein, stocks rallied and I nearly doubled my money in short order with my basket of retail stocks.

For much of 2018 and 2019, clouds of war reappeared. This time, it was a trade war between the two largest economies in the world, China and the U.S. Concerned about the impact, investors have once again crushed the retail sector.

And that means opportunity – if you know what to look for...

As you can see in the following table, the stocks of many retailers have been crushed this year. Many are trading near their lowest prices since the global financial crisis (if not all-time lows)... 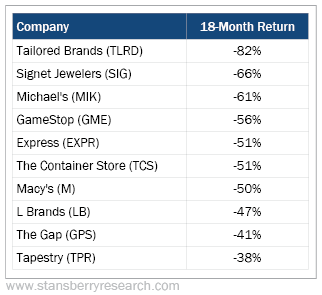 To be clear, many of these companies deserve to trade at these levels. They have bad business models, poor management, too much debt, and/or are getting squeezed by Amazon (AMZN).

In short, they're melting ice cubes – classic value traps. If you're clever (or lucky) in your timing, you might be able to catch their stocks for a bounce. But if you stick around too long, your capital is sure to disappear.

However, some of them are going to rebound – their stocks are like babies that have been thrown out with the bathwater, and thus represent compelling buys.

How do you tell the difference? How do you identify the companies that other investors think are destined for the trash heap of history... but instead stabilize (in which case the stock is usually a double) or better yet, turn around (in which case you likely have a multibagger on your hands)?

You want to see strong brands and market positions, robust free cash flows, a healthy balance sheet, and great management. But of course, if a company had all of these things, its stock wouldn't be in the toilet!

If you're going to go bottom-fishing in a distressed sector, you need to make difficult judgment calls. For example, in the case of flooring firm Lumber Liquidators (LL), the company isn't currently generating much in the way of profits or free cash flow.

But my analysis of the company and its sector leads me to believe that its historically strong store-level economics remain intact. Therefore, profitability should eventually rebound.

Similarly, in August I sifted through dozens of bombed-out retailers and zeroed in on Capri Holdings (CPRI), which owns well-known, global luxury brands Michael Kors, Jimmy Choo, and Versace. Capri generates healthy free cash flows... yet its stock was trading at less than six times earnings.

My senior analyst and I did a deep dive, going beyond the final statements. We visited many of its stores and talked to employees and customers. We spoke at length with an industry insider who had spent two decades in the consumer/retail sector.

Every data point told us that the company and its brands remained strong, and that the headwinds it was facing would likely dissipate.

As luck would have it, my timing was just right. In the four and a half months since then, the stock has jumped 36%.

To summarize, it's critical to avoid the stocks of most companies that are sliding toward oblivion – for the simple reason that they eventually get there. Today, many of those doomed companies are retail stocks.

But investors can also make huge gains if they can do deep research and analysis to correctly identify the wheat amidst the chaff. Buying a stock that's priced as if the company is going bankrupt – before the business turns around – is every investor's dream.

Editor's note: Right now, Whitney is spreading the word on what he calls "America's No. 1 Retirement Stock." He's so confident in this idea, he says he'd put 50% of his kid's college fund into this single investment... And you can get the name and ticker symbol for free by watching his presentation. Check it out right here.

"When you let your emotions take over, you often rush into decisions that you'll later regret," Whitney writes. This is true regardless of which direction a stock is going. And it can be a costly mistake, even with a big winner... Learn more here.

"To beat the market, you need to focus on the extremes," Enrique Abeyta says. The market is full of "rules" that don't actually work. But you can rely on five time-tested principles to succeed... Read more here.

Longtime readers know the profit potential of companies that keep customers coming back for more. From beer to sugary donuts, folks can’t get enough of habit-forming products. But this idea applies to psychological cravings, too. Today’s company sells games that people play day in and day out…

Activision Blizzard (ATVI) is a $45 billion video-game maker. It owns popular titles like Candy Crush and World of Warcraft. Between all its franchises, the company has more than 300 million monthly active users. And it keeps releasing exciting titles that customers crave – like the latest Call of Duty game, a reboot of its acclaimed Call of Duty: Modern Warfare trilogy. With this staying power on its side, Activision Blizzard released better-than-expected quarterly earnings recently, beating both revenue and earnings-per-share forecasts.

As you can see, ATVI shares are marching higher. They’re up 26% in the past year. And as Activision Blizzard keeps rolling out hit games, that trend should continue… 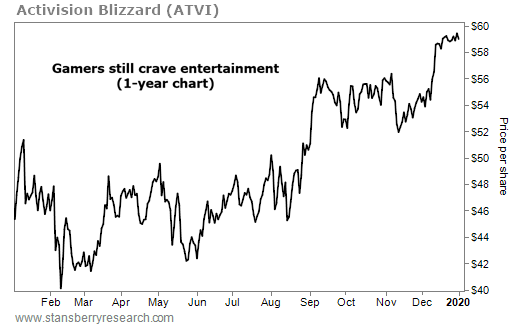