I wasn't expecting this at all. But there I was... And there it was.

I was in the middle of America's heartland. And I was looking at a symbol of China's expanding influence.

You see, I was passing through Chicago O'Hare International Airport. It was early. And most of the shops were closed. But the duty-free was open (it always is).

If you've been through there, you know passengers are funneled through the duty-free shops on their way to the gates in Terminal 5. It guarantees you get the opportunity to buy something tax-free.

Well, I wasn't in much of a buying mood. But something did catch my eye...

You might not recognize it, but below is an advertisement for Kweichow Moutai. Take a look... 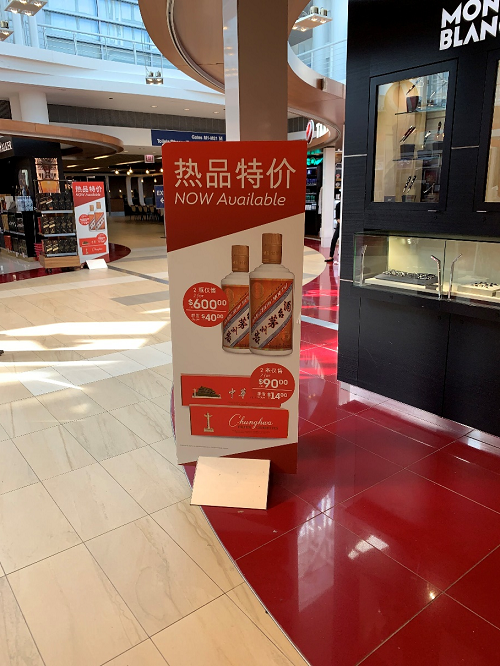 It's the drink of choice for China's wealthy, powerful, and elite. And this reputation has made Kweichow Moutai the most valuable liquor company in the world.

This alcohol you probably haven't heard of represents the largest stock in mainland China. That's right... Kweichow Moutai is at the very top of the MSCI China A Index. But there's more...

Every company on that index is in front of an ocean of cash that's flowing into China, thanks to global index provider MSCI's inclusion of local Chinese shares. It's a story of massive growth. And it's one Steve has covered in DailyWealth many times.

So Kweichow Moutai isn't just an obscure drink. It's a symbol of China's growth into the world around it.

Now, you might be wondering, "What makes it so special?"

Well, I need to start with a disclosure. I haven't tasted the stuff. But oddly enough, Steve has...

As regular readers know, Steve doesn't drink much. And to him, it tasted like fire. The flavor, people say, is one that would be considered "acquired."

It's no wonder Kweichow Moutai was hot going down for Steve... It's a grain alcohol, measuring in at 106-proof. It's said to have notes of pear, walnut, almond, and – of all things – soy sauce. The company itself claims Kweichow Moutai has 155 distinct aromas.

So it's probably not America's next hit party drink. But seeing it for sale in Illinois, with signage in Chinese, isn't something the average American would expect.

As I said, it's another sign of China's expanding influence...

Think about it. Have you traveled outside of the U.S.? You'll usually see plenty of signs in English... and vendors selling stuff U.S. tourists love to take home.

We're used to living in a world that caters to the U.S. And the world still does that. But it's not just about the U.S. anymore.

There were more signs with Chinese on them at O'Hare than just the ads for Kweichow Moutai... Many of the advertisements were sporting Chinese translations of their English slogans.

Much of this is driven simply by China's scale. It has a population of 1.4 billion. And thanks to huge economic growth, these folks are getting wealthier at a staggering pace. Take a look... 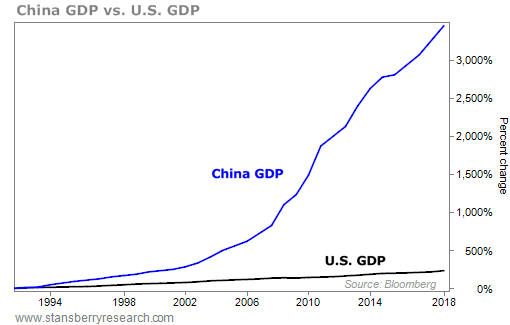 The chart shows how China's gross domestic product (GDP) has grown over the last couple of decades. It's a measure of a nation's economic output. But we can use it as a proxy for the rising wealth of that nation's citizens.

There's no question China's citizens are getting wealthier. And the pace of this growth is unlike anything the world has seen before.

It's been 30 years since China opened its doors to private business. Now, the country is home to nearly one in five of the world's billionaires. But it's not just the super wealthy who have benefited. The rise of China's plain old rich – and the middle class – has been astronomical as well.

You'll notice that the U.S. looks like it's standing still by comparison. A lot of that is because China had a lot of catching up to do. But the fact remains, Chinese citizens have more money today than they ever have before... And people with money travel.

So it's no wonder we're starting to see advertisements follow their audience. If wealthy Chinese are visiting Chicago, you'd better bet vendors there want to sell them Kweichow Moutai.

It's the drink that symbolizes power and influence, after all. And in this case, it illustrates that China's influence is expanding... to the rest of the world.

"Americans fail to grasp a lot about China," Steve says. "They think of Chinese communism like North Korea – but a far better description would be 'one-party capitalism.'" Americans have a lot of misconceptions about China. But far from being a backward country, it's incredibly advanced... and growing in leaps and bounds. Get the details here.

"Who has the best negotiating position in the trade war?" Steve writes. "If you ask most Americans, they'd say Trump. But they'd be dead wrong..." Read more to learn how Steve believes the trade war will play out: Why Trump Will Do Anything to End the Trade War.

Today’s company is an international powerhouse in “addictive” fast food…

If you want to create a lasting business, your customers should want to come back again and again. One way to do that is to give them something that they physically crave. Today’s company doesn’t sell alcohol or nicotine – but customers can’t stop eating its burgers and donuts…

Restaurant Brands (QSR) is one of the world’s largest fast-food companies. Its various chains have served customers for more than 40 years… And it has locations in more than 100 countries. From Burger King burgers, to Popeyes chicken, and even to Canadian breakfast spot Tim Hortons, this company serves up the foods we crave. Restaurant Brands reported solid earnings in April, with sales up 6.4% year-over-year. And the company is growing… It’s now bringing its fast-food chains to China.

As you can see, shares are on a roll today, too. They’re up more than 40% in 2019 alone. And as customers continue to eat “addictive” burgers and milkshakes, that’s not about to change anytime soon… 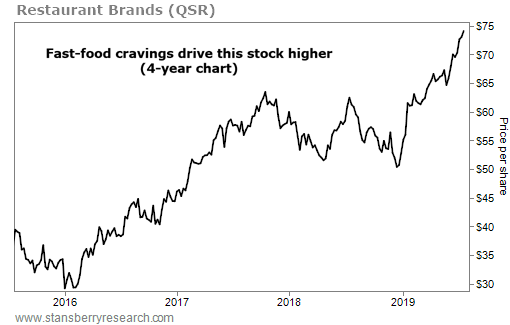