How to Profit From the World's Biggest Shopping Event
By Brian Tycangco
Thursday, December 10, 2020

It was supposed to be one of the worst days to be single.

Instead, it turned out to be one of the best... economically speaking.

No, I'm not talking about Valentine's Day, Thanksgiving, or even Christmas. I'm talking about November 11 – a boring, ordinary day for most Americans.

It's called Singles' Day. You may have heard of it... But I doubt you realize how big it is in China.

What I'm certain of is that after reading this, you'll find it's not so ordinary after all. In fact, it's giving investors an incredible opportunity...

How did a day get dedicated to single people all over China? It's an interesting story. You see, being single in China wasn't always something to be proud of...

Chinese culture has traditionally been all about family. And it used to be that if you weren't married by the time you hit 30, people started wondering if there was something wrong with you.

I know this all too well. Although I've lived in the Philippines most of my life, I was raised by Chinese parents and grew up immersed in the same culture.

But that was then...

Today, the average single adult in China earns more money than their parents ever dreamed of making. They drive their own cars. They buy their own clothes. Many of them live in their own apartments. And before COVID-19, they traveled the world on their own dime.

In short, single Chinese adults are loving the single life.

Not only that, but there are about 200 million single adults in China. That's more than the entire adult population of the U.S. (ages 25 to 65).

So, on November 11, 2009, e-commerce giant Alibaba (BABA) jumped at the chance to capitalize on this immense underserved market.

It created a massive, one-day promotion geared toward China's army of single people. It was an instant hit, pulling in $7.8 million worth of sales. But that turned out to be just the tip of the iceberg.

Two years later, in 2011, the same Singles' Day event drew in $820 million in total sales. And as its popularity spread throughout China, that number just kept soaring.

That was double the combined sales for Black Friday and Cyber Monday – the two biggest one-day online shopping events in the U.S. that same year.

Singles' Day has become such an anticipated online shopping event in China that the country's other e-commerce giant, JD.com (JD), has also climbed on the bandwagon...

This year, to avoid overwhelming the systems, both Alibaba and JD.com decided to kick off their respective Singles' Day promotions on November 1. And by spreading out the event, they managed to rack up a combined $115 billion in sales across their platforms.

Simply put, Singles' Day is the world's largest and most important shopping event. And it's dominated not by in-person stores, but by e-commerce platforms.

You've seen that shift take place over the years in the U.S. And the COVID-19 crisis has only added fuel to the fire. Don't expect it to change anytime soon.

This also means that you want to own dominant e-commerce platforms. And in China – the world's largest e-commerce market – that's Alibaba.

Alibaba also happens to be one of China's largest companies. But despite its size, it still has plenty of runway ahead of it. And if you think e-commerce is here to stay (it is), then this company is a smart long-term bet.

"The trends that have driven the country forward aren't going away," Steve writes. Regardless of your feelings about China, you can't deny that it's a leader in innovation. And that trend is only going to continue in the future... Read more here: A Massive Tailwind for Investment in China.

"There are still plenty of opportunities in China," Brian says, "But the 'easy' money has been made." If you want to make truly outsized gains, you have to focus on emerging markets as a whole... Get the full story here: The Perks of Going 'Back to the Future.'

Today, we’re looking at a company that thrives as the population ages…

As regular readers know, our colleague Dr. David Eifrig believes the aging Baby Boomer generation is a massive tailwind for health care stocks. As Boomers get older, they’ll need to spend more on medical care, such as prescriptions and doctors’ visits. This trend is still in place – and today’s company is set to benefit…

AbbVie (ABBV) is a $190 billion pharmaceutical giant. Its drugs treat diseases common among the elderly such as rheumatoid arthritis and prostate cancer. In fact, its second-most lucrative drug this quarter, Imbruvica, treats chronic lymphocytic leukemia, which mainly affects older adults. These medications help people live longer and improve their quality of life… And they bring in revenue as well. AbbVie reported total sales of $12.9 billion in the third quarter, a 52% increase year over year (partly boosted by a recent acquisition).

As you can see in today’s chart, shares of ABBV are soaring. The stock is up nearly 70% from its mid-March lows, recently hitting new highs. As Baby Boomers continue to pay more for medical expenses, ABBV should perform well… 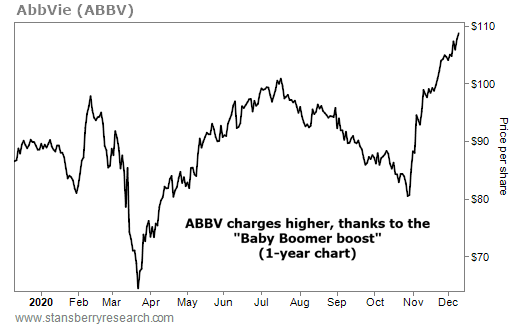