This 'Law' Is Setting the Stage for Outsized Returns
By Matt McCall
Tuesday, February 11, 2020

Think of the extraordinary change someone born in 1900 could have seen over a long life.

As a child, they would have seen horses in city streets... and would have grown up to see those streets full of cars.

They would have seen the invention of the radio... the airplane... the fax machine... air conditioning... personal computers... and so much more.

I believe those of us who live the next 30 years will see a similar set of changes.

We'll see the world change more rapidly than any other group of people in history.

Large new industries will be created at a pace we've never seen before.

These new industries will demolish old industries at an unprecedented pace. And it's all thanks to "The Law of Accelerating Returns."

If you're on the right side of this law, and you invest in the right stocks now, you could make multiple times your money... and set yourself up for a comfortable retirement.

This idea comes from Ray Kurzweil, an American inventor and futurist. About 20 years ago, he began writing about the idea that the rate of change tends to accelerate in systems that evolve over time... like technology.

This is called accelerating returns — or "exponential progress." And it differs from conventional progress in a massive way.

You see, conventional progress — the kind of advancement ingrained in the minds of most people — is like going for a walk. You take one step, you advance one step. After taking 10 steps, you are 10 steps away from where you started. Pretty simple, right?

Well, exponential progress — the kind that's taking place in technology labs and businesses right now — radically changes the equation... And it radically accelerates the pace of change we see in the world.

That's because exponential progress multiplies in power and scope with each step.

It's critical for investors to understand this if they want to position their 2020 portfolios for outsized returns.

Exponential progress "snowballs" and builds on itself. It ensures that each new step is larger than the one before. Specifically, the progress made in one step is double the amount of progress made in the step that came before it.

For example, if you make exponential progress while taking a walk, you take one step. Now double that... and your second step is the equivalent of two regular steps.

By the time you get to the 10th step, your step is the equivalent of 512 steps!

Walking doesn't work that way, of course. But knowing the difference between linear growth and exponential growth instantly sets you apart from your fellow investors and gives you a huge advantage over them. It can set you up for huge outperformance over the coming years.

When a small number grows at an exponential rate, the first stages of growth aren't incredible. The extraordinary growth happens at an "inflection point" in time... when the exponential growth begins to snowball at stunning rates.

This rapid development has stunning business and investment ramifications. The world around us is changing at never-seen-before speeds... And it's catching many people off-guard.

For example, over the last few decades, it took an average of roughly 20 years for the typical Fortune 500 company to reach a market capitalization of $1 billion.

Founded in 1998, the company known as Google – now Alphabet (GOOGL) – reached a $1 billion market cap after just eight years, which was considered incredible.

In 2012, virtual-reality firm Oculus was formed... and did it in less than two years. 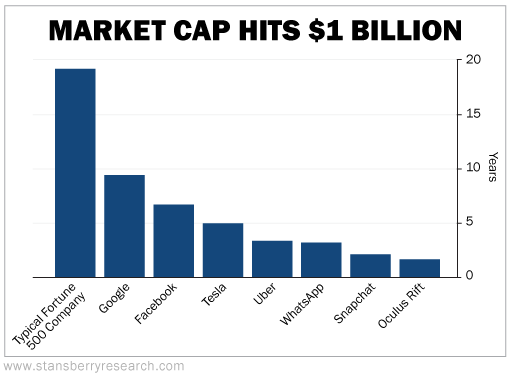 As you can see, it's taking less and less time to generate incredible wealth. And investors are enjoying the benefits.

Incredible industry shifts used to take 20 years or more to play out. Now, they are playing out in less than five years.

Editor's note: This bull market is hitting its most "supercharged" phase yet... where select small, innovative stocks could help turn some investors into millionaires. That's why Matt McCall is joining us tomorrow night at 8 p.m. Eastern time. He and Steve Sjuggerud will discuss what 2020 holds for the Melt Up – and which stock you MUST be positioned in today. You can watch it all online for free... Click here for the details.

"When it comes to extreme wealth creation," Matt writes, "you can't do much better than simply owning a small company that grows large." And since we're in the early stages of several disruptive market trends, it's important to have the right mindset to benefit from the big winners... Learn more here.

"It's tough to know what to make of everything that's going on," Steve says. With the markets making new all-time highs, global conflicts, and political unrest, it's easy to avoid investing. But if you take a step back, you'll see that this bull market is still healthier than most folks realize... Read more here.

Our colleague Dr. David Eifrig has been bullish on health care for years. As Baby Boomers age, they will need to spend more on medical care. That’s creating a huge tailwind for businesses in the sector. And today’s company is a perfect example…

ResMed (RMD) is a $25 billion medical-device maker that specializes in treating sleep apnea. Its machines help regulate breathing at night to ensure safe, healthy sleep. According to the company’s own estimates, it has changed more than 15 million lives. And there’s likely more to come… More than half of people age 65 and older are at high risk for obstructive sleep apnea, according to a study from the University of Michigan. As a result, ResMed has set a goal of improving more than 250 million lives by 2025.

As you can see in today’s chart, shares of RMD are soaring. The stock is up more than 75% over the past year, recently hitting a new all-time high. It’s yet another sign of the growing bull market in health care… 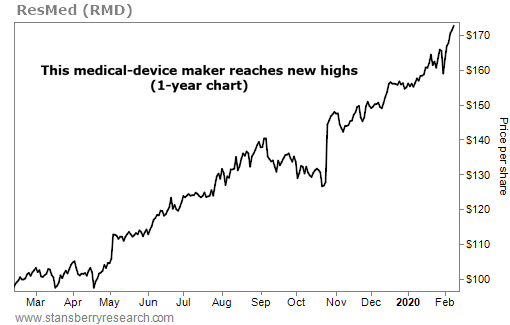