A Massive Tailwind for Investment in China
By Steve Sjuggerud
Thursday, November 5, 2020

He was there to commemorate the 40th anniversary of the area's "special economic zone" status. That status allowed Shenzhen to interact with the global economy in a way that previously wasn't allowed in China.

In many ways, it's responsible for the incredible economic growth the country has seen in recent decades.

Shenzhen is a key technology center in the Greater Bay Area. That's a portion of southeastern China that stretches roughly 120 miles from Guangzhou to Hong Kong and contains a population of roughly 70 million.

Some of China's largest and most important technology companies are headquartered in Shenzhen... including Tencent, Huawei, phone maker ZTE, and drone maker DJI.

Longtime DailyWealth readers know I've hammered home the opportunity in China for years. And the technological development happening in the Greater Bay Area is a big part of the story.

Importantly, the things President Xi said last month tell us that this trend is nowhere near over.

Xi made his hopes for China as clear as day during last month's speech. As he said then...

Shenzhen should build high grounds for technology and innovation with global influence... It should plan and nourish new industries with foresight and to develop a digital economy.

Xi wants Shenzhen and the Greater Bay Area to retain and improve on its status as a technological innovator. It's already world-class...

The little coastal region pumped out roughly 20,000 patent applications in 2017. And it's now responsible for nearly half of the patents coming out of China.

You wouldn't dare think of the region as just another industrial hub. Grads in the top high-tech fields find jobs starting between $50,000 and $90,000 a year. And after just two to three years, these young tech workers can find themselves making over $235,000 a year as team leaders.

One perfect example of that innovative spirit in action is DJI. It makes flying camera drones. And there's no question that it's the leader in the segment.

It holds 77% of the U.S. market for consumer drones. No other single rival holds more than 4%. Those are the kinds of results that nearly unlimited funding and talent can produce. And DJI isn't a one-off...

Shenzhen has also just about cornered the market on rapid prototyping. That's the process of quickly building full-scale prototypes of new technology products.

It's a must in today's fast-moving world. And since Shenzhen has become a leader in the space, nearly every major company that you can imagine has a base there... including U.S. tech giants like Cisco Systems, Oracle, Nvidia, and Microsoft. Really, the list goes on and on.

Shenzhen has become the world's hub for technological innovation. Despite that, I'm willing to bet that you're either underexposed to this market... or you're just not invested in it at all.

I get it... Investing outside the U.S. is tough enough. Moving money to China is even tougher. And seeing me write about how China is a global technology leader might ruffle your feathers, too.

You don't have to like it. But facts are facts. As investors, we can either join the ride or miss out entirely.

Xi knows that the future of China – and of the world – relies on technology and innovation. As investors, we want to chase innovation too. That's where the biggest returns always come from.

China has helped lead the way in technological innovation more than most people realize. Xi wants that to continue... And I'm betting he'll get his wish.

That's why I continue to pound the table on investment in China. The trends that have driven the country forward aren't going away. And I urge you to take advantage of them in your own portfolio.

Imagine if you could travel back to the past and invest in big tech names before they took off. Well, in one part of the world, that's possible today. If you want to earn outstanding profits, you need to look for the "Next Chinas"... Get the full story here: The Perks of Going 'Back to the Future.'

"When it comes to growth and opportunity, China has been the mother lode," Brian Tycangco writes. And while there's still a lot of "gold" in China, other markets offer even better opportunities for early investors... Read more here: The Stage Is Set for the Rise of the 'Next Chinas.'

Today, we’re looking at a company that shows us the economy is rebounding…

Longtime readers know we use “real world” gauges as economic bellwethers. And industrial companies are some of our favorite measuring tools. When manufacturers are performing well, it means there’s demand for what they’re producing. Today’s company is a clear example of this…

Illinois Tool Works (ITW) is a $65 billion manufacturing giant. The company is one of the world’s leading manufacturers of specialized industrial equipment for businesses around the globe. With its involvement in several recovering markets – such as construction, adhesives, and auto parts – the company enjoyed a solid third quarter. It reported $3.3 billion in revenue… down slightly year over year, but up 29% from the previous quarter.

As you can see in today’s chart, shares have soared over the past five years. They’re up more than 120% and recently hit a new all-time high. That’s a positive sign as the economy continues to bounce back from the COVID-19 pandemic… 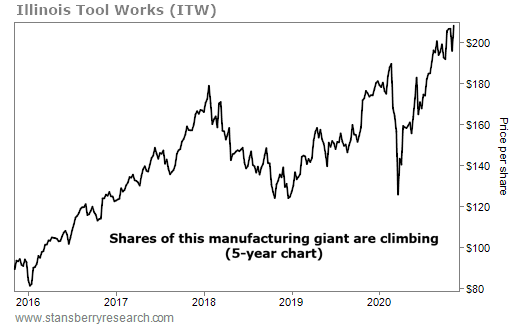