Being a contrarian investor is a lonely path...

Most folks want other people to like and agree with their investment ideas.

When they do, it gives you a sense of comfort that your idea will work well. But that's not necessarily true...

Our colleague Dr. Steve Sjuggerud's investing mantra is almost entirely the opposite, for example. Steve looks for things that are cheap, hated, and in an uptrend. And his phenomenal long-term track record speaks for itself.

Another example of this idea comes from natural-resource-investing legend Rick Rule, who often says, "you're either a contrarian or a victim"...

Steve and Rick have decades of experience in the markets. They've been through highs and lows. And even though their work has been in different fields, it's clear they have come to some of the same conclusions.

Today, we'll look at one consensus bet that says a rally could be on the horizon...

To help us gauge sentiment, we often refer to the Commitments of Traders ("COT") reports...

COT reports exist for most assets that trade on the futures market, including bonds, stock indexes, currencies, and a wide range of commodities. The reports classify different types of traders and track their futures positions.

Industry professionals (or "commercial" traders) use futures as a way to protect their businesses from price fluctuations. And the folks who often take the other side of their bets – hedge funds and other traders – are speculating.

When speculators are wildly bullish, it's a warning sign... And when they're overwhelmingly bearish, it's a sign that the asset may be ready to rally.

Today, we'll consider speculator positioning in an area of the market that could reverse course soon. So you'll want to make sure you're positioned properly...

The Russell 2000 Index is the U.S. benchmark for small-cap stocks. It includes about 2,000 companies with market values between $115 million and $17 billion. The health of the Russell speaks to the strength of the U.S. economy... and its smaller businesses.

In the chart below, you can see that the Russell (the black line) plunged from February to March last year. It was down 43% at its lows – its sharpest drop in years. Recently, though, the Russell has soared. As of yesterday's close, it traded 115% above its March 2020 low.

In the most recent COT report on August 13, speculators' positions (the blue line) in the Russell totaled about 57,000 contracts "short" (betting on lower prices). In the past, when speculators held about 80,000 contracts short, it marked extremely bearish speculator sentiment... And it has often been a turning point for the Russell... 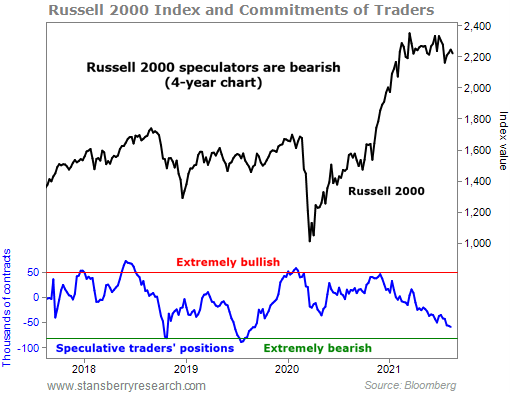 Yesterday, the Russell 2000 closed 9.6% below its all-time high. The index has not done much over the past few months. It has mostly traded sideways just below its old highs. Yet speculators are adding to their bearish bets...

If the Russell 2000 climbs higher, it could take off as speculators rush to exit their positions. It could set the stage for a big rally in small-cap stocks.

We should note that the COT history for this index is mixed... Extremely bearish positions have not always marked a low in the index. And vice versa for extremely bullish positions.

But either way, you'll often find extreme sentiment at key turning points in all markets. And right now, speculators are bearish on small caps.

Keep in mind, sentiment is only one piece of a complex puzzle. It's not a "magic bullet." And COT extremes are short- to medium-term indicators. Signals usually wear off after a few months. So you don't want to place long-term trades based on these signals unless they line up well with your other analysis of the asset.

For short-term trades, though, the COT reports are a great way to find contrarian setups. And that's exactly what we have with small caps today.

Editor's note: You'll find all sorts of unique yet simple-to-use ideas in DailyWealth Trader. This service covers everything from low-downside, high-upside speculations in "boom and bust" sectors like commodities, biotech, and emerging markets... to simple options strategies for generating double-digit annualized returns on blue-chip stocks. If you want to prepare for every possibility in the markets, click here to learn more.

Contrarian investing isn't as easy as it sounds. You still need to know you're making a smart call before you can bet against the crowd with confidence... Read more here: These Three Steps Will Give You the Courage to Be Contrarian.

One market outside the U.S. is hated today. And when the uptrend returns, you'll want to make sure you're on board. Learn why you should keep a close eye on this beaten-down group of stocks right here.

Today, we’re looking at one of our favorite investing strategies…

Our founder Porter Stansberry has said that property and casualty (P&C) insurance is the “world’s best business.” These companies receive upfront premiums from their customers and pay claims later. All in all, they aim to pay out less than they bring in. That leaves insurers – like today’s – holding plenty of extra cash to invest and reward shareholders with…

Brown & Brown (BRO) is America’s fifth-largest independent insurance brokerage. It sells P&C insurance, as well as employee benefits programs… And its customers range from large corporations and governments to families and individuals. Right now, Brown & Brown’s business is booming across all of its segments. In the most recent quarter, the company reported net income was up 44% year over year to $139 million. On top of that, it has rewarded shareholders by raising dividends for 27 consecutive years.

In May 2020, our colleague Dan Ferris recommended shares of BRO to his Extreme Value subscribers. Readers who followed his advice are up 54%… On top of that, the stock recently hit a fresh all-time high. Congrats to Dan on another great call! 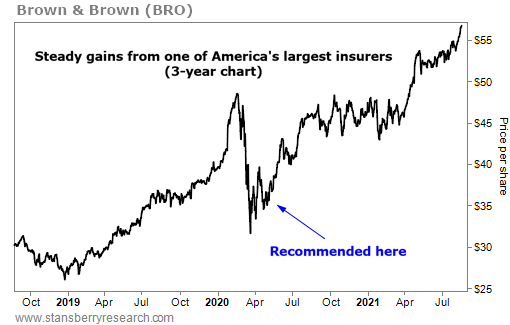