Don't Give Up on China for Good
By Steve Sjuggerud
Monday, August 16, 2021

"When is China's market coming back?" Buck Sexton asked me a couple weeks ago.

I got to know Buck when he came on a trip to China I hosted with a group of subscribers back in 2019.

I was impressed that he signed on to go... and that he went with an open mind.

You see, most conservative commentators haven't been there. Heck, even extremely high-ranking officials who set China policy in the U.S. (like Peter Navarro during the Trump administration) have barely seen China.

Buck Sexton has seen it. He knows what it looks like on the ground. He knows that Beijing is as advanced as any city in America, if not more so. And he knows that the American view of China's economy might have been true 20 years ago... But it isn't like that today.

So the phrasing of his question was interesting... He has been to China. He knows the tide is inevitable. So he asked me when China's market is coming back... not if.

Today, I'll share why that's the right frame of mind when viewing China, even if it seems like a dangerous place to invest today.

I keep thinking investor sentiment towards China has bottomed... Then, it gets worse.

The recent fear is the sweeping regulation that's coming from Beijing. One of the latest changes was a ban on profits for an entire group of publicly traded companies – the for-profit education industry is going non-profit. Those stocks fell roughly 70% on the news.

Buck's question came before that news crashed Chinese stocks even further. But his question of when – not if – is still valid.

I can't give personalized investing advice, so I couldn't answer Buck directly. But I can discuss my thoughts on China here...

While U.S. stocks have absolutely soared in 2021, China's markets have lagged. 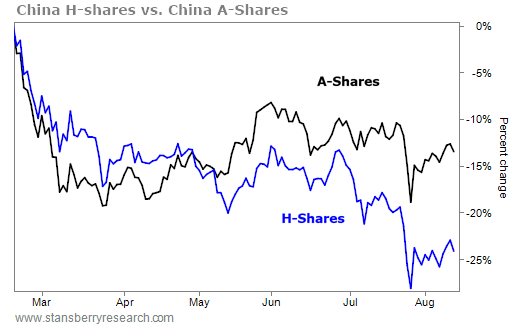 U.S. stocks are up 14% over the same period. So it's no wonder observers of China's market are asking what the heck is going on.

The situation is even worse than the chart above shows, though. That's because the regulatory shake-up is gripping a group of Chinese companies that has consistently spit out hefty returns... the technology and Internet sector.

That includes Tencent, the world's largest video-game company and owner of the mega-app WeChat... Alibaba and JD.com, China's two largest e-commerce platforms... and Trip.com, the "Priceline of China."

These stocks have soared over the last decade, even during tough times for the overall Chinese market. The KraneShares CSI China Internet Fund (KWEB), which holds them, more than tripled from February 2016 through February 2021.

But then, just as the H-share and A-share markets peaked, so did KWEB. The fund has crashed 53% since its high. Take a look... 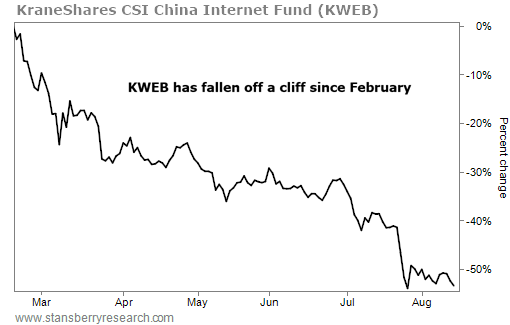 It has been a rough few months for investors in China... But it won't last forever.

The long-term opportunity in Chinese stocks – the one I've been pounding the table on for years – is still in place. The country continues to experience incredible economic growth. And its markets are maturing rapidly.

There will be plenty of more bumps along the way. And it's possible the regulatory changes we've seen aren't over. But I urge you not to give up on China for good.

For now, you should approach China with caution. But I urge you not to give up on Chinese stocks forever.

"It seems like just about every asset had a banner year in 2020," Brian Tycangco writes. But the good times will eventually end for U.S. stocks. That's why you need to look at other markets to find chances for profits... Read more here: This Trend Doesn't Scare Many Americans... But It Should.

"China is an electric-vehicle owner's paradise," Brian says. Right now, China is miles ahead of the rest of the world when it comes to this technology. But the boom in this sector is just getting started... Get the two-part story here and here.