The Stars Are Aligning for a Massive Boom
By Dr. David Eifrig
Friday, May 7, 2021

There has been a lot of talk about our country's economic recovery heading into the second half of the year...

And that's because we've seen impressive progress with the distribution of the COVID-19 vaccine. According to the Centers for Disease Control and Prevention, roughly one-third of the U.S.'s population has been fully vaccinated. So it makes sense that economic activity would pick up significantly in the next few months.

People desperately want to get out of their houses...

They want to go to sporting events and restaurants. They want to travel to visit family and friends. Spending will pick up – there's no doubt about that.

But with the market trading near all-time highs, and at all-time-high valuations... other investors believe the economic rebound is already priced in. After all, stocks are trading for 30 times earnings. And they have historically only traded for an average of 17 times earnings.

However, one of the most important people in finance agrees that we're about to see an economic boom...

Last month, 60 Minutes aired an interview with Federal Reserve Chair Jerome Powell. During the interview, Powell was asked about everything from the risks in the economy to a speculative bubble in the stock market.

He highlighted COVID-19 cases as an ongoing risk, but noted that the economic outlook has "brightened substantially," with "strong growth and strong job creation starting right now."

Powell later talked more directly about whether this will be a slow economic recovery or an economic boom. Here's part of the transcript from the interview...

JEROME POWELL: Well, I would say that this growth that we're expecting in the second half of this year is going to be very strong. And job creation, I would expect to be very strong. We had just about a million jobs created last month, if you include revisions upward for January and February. And I would think we would like to see a string of months like that and make quick progress back to maximum employment. That is certainly in the range of possibility. As I always have to point out, there are risks to that forecast. But I think that's the base case forecast that we have. And by the way, many others have as well.

PELLEY: So when does the Fed start tapping the brake in terms of raising interest rates and trying to cool things off?

POWELL: So what we've said is that we'd consider raising rates when the labor market recovery is essentially complete and we're back to maximum employment and inflation is back to our 2% goal and is on track to move above 2% for some time. It'll be a while until we get to that place.

Most economists and analysts have been putting these pieces together...

There's going to be great growth later this year, and interest rates should remain low for the foreseeable future. That equation can certainly lead to higher asset prices.

We agree – the stars are aligning for an economic boom. The question then becomes, does that mean a stock market boom is coming, too?

When asked about whether the stock market is in a bubble or not, here was part of Powell's answer...

POWELL: One other piece of it though, we do look at asset prices. And I would say, some asset prices are elevated by some historical metrics. Of course, there are people who think that the stock market is not overvalued, or it wouldn't be at this level.

We don't think we have the ability to identify asset bubbles perfectly. So what we focus on is having a strong financial system that's resilient to significant shocks, including if values were to go down.

If it sounds like he was dancing around the answer, that's because he was. In truth, it's very difficult to call a top in any market – especially a speculative market.

If there's one thing you need to know about speculative markets, it's that they can run much higher – and much longer – than you could imagine. And when the downturn comes, it can be extremely quick, without much warning at all.

But if Powell is right, and if we do see an economic boom later this year, investors should keep pushing this market higher.

There are risks, of course. And investors are likely going to experience plenty of volatility. However, it's hard to bet against strong economic growth paired with strong fiscal support and monetary policy.

Plenty of folks are still worried. They wonder if it's really the time to get into the market and profit... But if you're just sitting around in cash, you'll miss out on one of the greatest moneymaking opportunities of your lifetime.

Editor's note: The time is NOW to prepare your money for a radical shift in the markets. All the pieces are in place today for a once-in-a-lifetime investment setup... In fact, it could be your last chance to make truly outsized gains before the ultimate peak. Steve recently shared how to position yourself for success in this strange, euphoric market... Learn more here.

The Federal Reserve has a huge array of tools it can use to spur an economic recovery. But to know if the U.S. is truly getting back on its feet, we need to watch this one key driver of economic activity... Get the full story here: The One Indicator That Explains It All.

When the Melt Up is truly underway and folks are seeing life-changing gains, investors become manic. And right now, people are pouring more money into stocks than ever before. Find out what that means for the future of the Melt Up right here: New Traders Are Pouring Money Into Stocks.

Market Notes
COLLECTING TRASH IS BORING... BUT IT PAYS OFF

These companies might not be among the hottest new trends in the market… But as longtime readers know, investing in boring businesses that never have to change or adapt – like paint or animal feed – can help make you steady gains, even in uncertain times. Today’s company is a prime example…

Waste Management (WM) is a $60 billion garbage collector. It provides waste-disposal services for more than 20 million customers in North America. And although collecting waste isn’t particularly exciting, it’s a service we rely on every week… which makes this a strong business. In the first quarter, WM’s revenue increased to $4.1 billion, up from $3.7 billion in 2020. The company also raised its guidance for 2021 – a good sign for investors.

As you can see, WM shares have continued to climb higher since bottoming with the market last March. They’re up 60% since then… and just hit a new all-time high. It may not be trendy, but collecting trash is one reliable business… 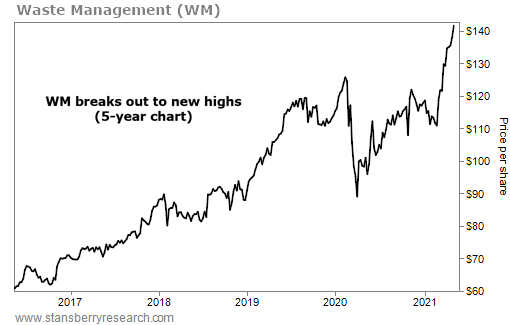