The Software Giant Behind the 'King of Calendars' Is Still a Winner
By Joel Litman
Friday, January 8, 2021

I don't recall having to juggle so many things when I was 12...

My eldest son lives in a different world, though. Since he started 7th grade this fall, it seems like the number of to-dos on his list has jumped exponentially.

I thought that remote schooling would make things easier for him to manage. However, the change in schedule created a lot of ups and downs...

I've seen the disappointment roll over him as he missed a Dungeons and Dragons campaign that he had been looking forward to. Later in the same week, he sat waiting online for a class that he forgot had actually been cancelled. Finally, he was exasperated when he missed the deadline on an art project. He had completed it diligently and creatively... but he didn't digitally submit it in time for a due date that had been changed.

I assured him that the problem wasn't some personal inability to memorize all these things. The fact is, no one can.

One company has capitalized on this human failing. You'll recognize its name – and you've almost certainly used its tools to stay organized. But you might not realize just how profitable it really is.

Over my career, I've had the opportunity to work with truly exceptional salespeople who have sold products and projects in the hundreds of millions of dollars. I asked them about how they became so unbelievably effective.

I heard the same basic response several times from these professionals... "Review your daily to-do's the night before," and "Review your weekly calendar on Sunday night."

So, for my son, I recommended a habit that will benefit him greatly... now, and for the rest of his school and work career. He now uses a simple online calendar.

For many corporations, the "king of calendars" is Microsoft's (MSFT) Outlook...

It has been the industry standard for decades.

Many people also use the Microsoft product OneNote as a broad checklist and note-taking tool. It can be accessed and updated from anywhere, and it allows people to keep their lives and work schedules organized and in one place.

Microsoft has even become involved in cloud computing with its Azure platform. Azure is considered the second-largest player in the space. This has helped diversify Microsoft's revenue sources and made it harder to unseat.

Not to mention, the company is the owner of Xbox, one of the top-selling video-game consoles in the world. The Xbox One, Microsoft's last-generation console, sold an estimated 51 million units worldwide.

One might think that Microsoft's industry-leading capabilities would mean high returns. However, looking at as-reported metrics, it appears this isn't the case...

Microsoft's as-reported return on assets ("ROA") was 11% in 2020. Additionally, this metric hasn't eclipsed 20% since before the Great Recession. 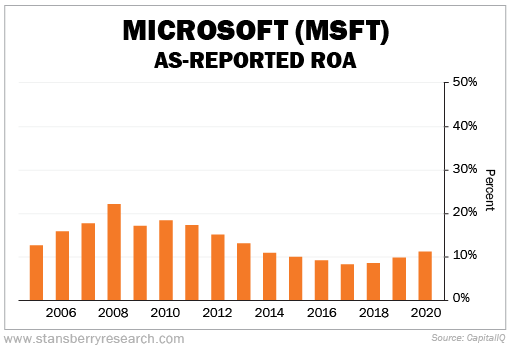 Microsoft appears unable to convert its innovation and industry-leading position into high returns. While offering a wide breadth of products, its profitability is in line with corporate averages.

But this picture of Microsoft's performance isn't accurate...

Due to distortions in as-reported accounting – such as the treatment of goodwill – Wall Street has missed the mark on Microsoft's profitability.

This type of problem is why my team and I developed "Uniform Accounting." It's an approach that allows us to look inside any company... and see financial realities that individual investors and Wall Street are missing.

In this case, Microsoft's Uniform return on assets ("ROA") has been nearly double the as-reported metric since 2005. In 2020, it boasted a Uniform ROA of 33%.

The company has been able to convert its market-leading products into robust returns – its Uniform ROA hasn't fallen below 25% in any of the past 15 years. 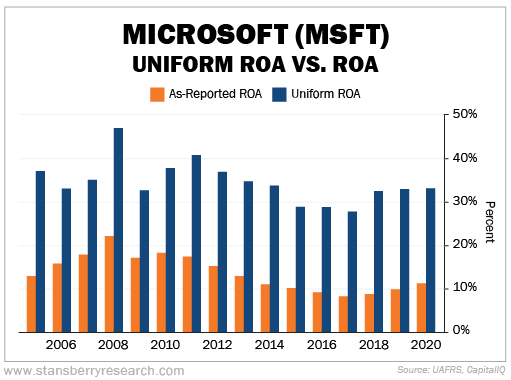 Microsoft's products have become essential to workers and have seen consistent demand... But standard accounting metrics would have investors believe that the company has average profitability instead of robust returns.

Thanks to its dominant position, Microsoft should be able to continue to maintain these results and drive above-average returns.

Editor's note: Microsoft has been one beneficiary of what Joel calls the "At-Home Revolution." He says it's changing the way we work, play, supply, and protect our homes... And he has identified nearly a dozen companies that stand to be the biggest winners from this emerging megatrend. Now, he has prepared a video presentation in which he reveals his favorite stock for the At-Home Revolution. Get its name and ticker symbol for free by clicking here.

"Many of the trends the pandemic has unlocked are here to stay," Joel writes. As the vaccine rollout signals the beginning of the end for COVID-19, don't be tempted to dump the winners of the "At-Home Revolution"... Read more here.

"Unfortunately, the as-reported numbers for most companies are simply wrong," Joel explains. We can see this with another productivity company that's secretly well on its way to profitability... Learn more here: Solving 'Office Myopia' in the Era of the Pandemic.

Market Notes
THIS ORGANIC BUSINESS MAY BE BORING, BUT IT'S MAKING STELLAR RETURNS

Today, we’re checking in on a “boring” business that has seen new highs of late…

By boring, we mean companies that have been doing the same thing for generations and doing it well. They may not be exciting, but these types of businesses can help you make steady returns in the long term – in good times and bad. And recently, one company has done even better than that…

With a history stretching back to 1882, Darling Ingredients (DAR) is a leader in sustainable, natural ingredients. This company repurposes animal-based products – like grease and frying oil – into things like soap and feed. That may not sound flashy… But Darling recently enjoyed its strongest quarter of fiscal 2020, thanks to solid performance in its food and international fuel segments. And it just released a new fertilizer that will save 39 million pounds of landfill waste per year.

As you can see, since bottoming in March, DAR is up an impressive 350%… and it just hit a new all-time high. It’s more proof that boring businesses can lead to big gains, even during a global pandemic… 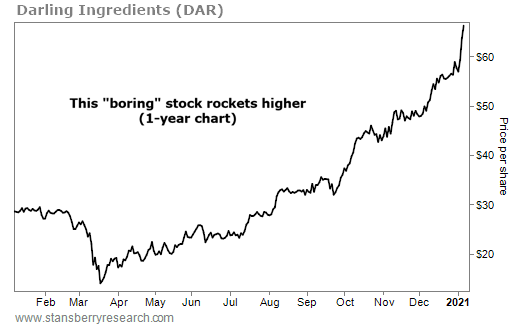