Solving 'Office Myopia' in the Era of the Pandemic
By Joel Litman
Monday, November 30, 2020

Attention to detail is important... But so is seeing the big picture.

Otherwise, you can fall into the habit of "missing the forest for the trees." This is a centuries-old saying about someone who focuses too much on a simple detail... thereby missing the whole picture.

Attention to detail is vital in work and research. Too often, though, people miss the purpose of a project by only caring about specific details. It's the equivalent of myopia, or nearsightedness.

Looking at the details is also important to successful investing. You might comb through earnings reports, for example, to get an idea of a company's strength. Unfortunately, the as-reported numbers for most companies are simply wrong.

They miss the forest for the trees... And as a result, they can be full of inaccuracies.

That's why my team and I developed "Uniform Accounting." This approach allows us to look inside any company... and see financial realities that individual investors and Wall Street are missing entirely.

Today, Uniform Accounting points us to a company that's helping remote office workers focus on the big picture. And as the real numbers show, it has more profit potential than you might think...

Managing the risk of employees missing the forest for the trees is different in a work-at-home environment.

Before the coronavirus pandemic, employees could easily walk into their boss' office and quickly ask for clarification when they needed it. However, the work-at-home environment isolates co-workers from each other... so now, employees don't always know when their colleagues are free.

E-mail, phone calls, and video calls can only do so much. Co-workers end up worrying that phone calls are too invasive... while e-mail can be too formal if you only need to ask a simple question. And in many cases, employees might not want to bother co-workers or bosses. So they choose to do nothing.

This can hurt productivity and learning... and it can lead to project myopia – just doing what you think needs to be done as opposed to thinking about that bigger picture.

One way of creating more informal communication is using chat services such as Slack (WORK)...

This is a channel-based messaging platform, so it can have chat channels as large as the whole company and as small as specific teams. Additionally, any employee can send direct messages to any other co-worker. Slack also allows users to set a status so others know when their colleagues are busy or available.

Employees can easily communicate with any other user or team, thus making virtual work simpler for everyone.

Slack was founded in 2009, and it just went public last year. As a young firm, it's still trying to become profitable... And it's facing competition from tech giants Microsoft (MSFT) and Alphabet (GOOGL). In particular, Microsoft is challenging Slack by pushing its Teams product and its easy integration across Microsoft Office products.

If you only look at the "GAAP" numbers – the generally accepted accounting principles that go into traditional earnings reports – they seem to confirm Slack's profitability problem...

The company's as-reported return on assets ("ROA") has been negative over the past three years and cratered to a low of negative 26% this year. Take a look... 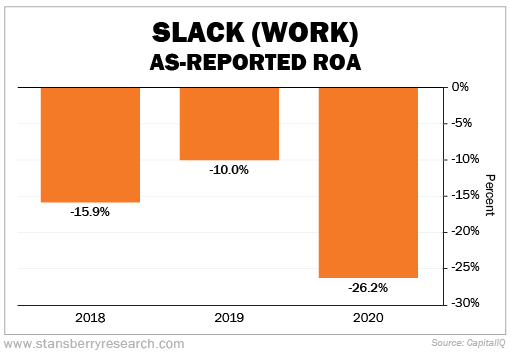 However, this isn't an accurate picture of Slack's ROA. Stock option expenses – among other distortions – are pushing down the firm's profitability metrics.

Uniform Accounting shows how necessary Slack's platform has become during the pandemic. Instead of falling, the company's Uniform ROA increased to negative 4% this year. While still negative, this is the highest ROA level for Slack in its history... and shows how close the company is to becoming profitable.

Negative returns are common for startups... Yet even as competition has increased in the space, Slack's ROA for the next full fiscal year is expected to turn positive. Take a look... 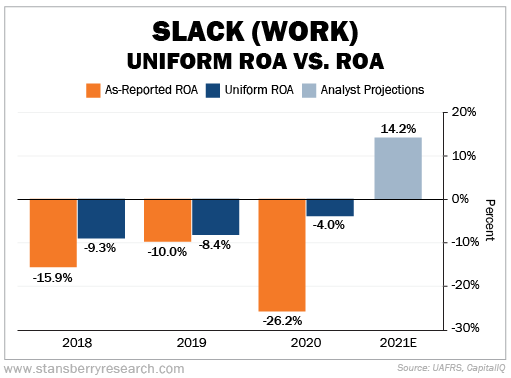 Based on the as-reported ROA, investors might think that Slack's returns would still be negative. However, Uniform Accounting shows this has been a respectable calendar year for the company. Slack's software is more vital than ever... And the company has been able to turn the increased demand into higher levels of profitability.

While the trees may be full of as-reported metrics, it's important to look at the forest and see the entire picture. For Slack, profitability isn't as negative as the market thinks.

Editor's note: Shares of at-home work stocks have soared during the pandemic, with gains of 56% in four months (Arista Networks)... 63% in five months (Citrix Systems)... and a staggering 329% in seven months (Zoom). But Joel and his research team have identified a stock that could top those gains during what they're calling "America's new megatrend." Get the details right here.

Even after the next round of lockdowns ends and we get the pandemic under control, many employees will still likely work from home at least part of the time. And that means continued strong cash flows for this sector... Read more here: The 'At-Home Revolution' Is Far From Over.

When Warren Buffett says there's an issue with current accounting methods, it's best to listen. That's why Joel and his team have developed a way of valuing stocks that removes the noise of modern accounting and presents the truth behind a stock's numbers... Get the full story here: Warren Buffett's Billion-Dollar Tech Bet.