China has jumped to a position of leadership in the electric-vehicle market. It did so by making its roads a paradise for electric vehicles...

Plenty of charging stations, access, and preferential treatment have made China the best place in the world to own an electric vehicle today. And it wants that to be true going forward, too.

The Chinese government says it wants electric vehicles to account for 25% of total vehicle sales by 2025.

To get there, the government is pulling out all the stops...

Today, I'll show you the full extent of what China is doing... and what it means for investors.

Like the U.S., China has given discounts to individuals buying electric vehicles. It's the simplest way to incentivize buyers. But the $9,200 manufacturer incentives that kickstarted China's electric-vehicle market were just the tip of the iceberg.

That's because the government also realized that few people would buy electric cars if they didn't have anywhere to charge them.

So, in September 2015, the National Development and Reform Commission ("NDRC") said it would order the State Grid Corporation of China to build a nationwide charging-station network. It was to be capable of fulfilling the power demand of nearly 5 million electric vehicles by 2020.

As of last year, China had already installed more than 809,000 public charging outlets. Take a look... 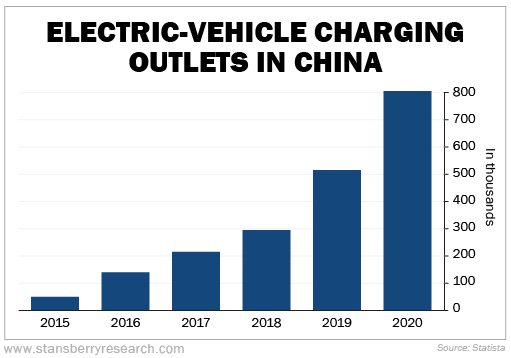 By the end of June, China had grown that figure to 923,000 public charging piles. And that doesn't even count the hundreds of thousands of private charging piles in homes and private offices.

That means China's electric-car population could triple instantly and still have public charging that's as easily accessible as in the U.S. today.

But China is adding new public chargers at a rate of 19,000 every month in 2021. And all this supporting infrastructure is coming at a time when Beijing is making it easier than ever for car owners to shift to electric...

You see, in 2016, China's Traffic Management Bureau (the country's version of the Department of Motor Vehicles) announced the introduction of new "green license plates." These would clearly differentiate NEVs from normal gas-powered vehicles.

Cars with these green license plates enjoy preferential policies. It's much more dramatic than anything you see in the U.S. But remember, China wants this industry to succeed... And with these incentives, it's making sure that its citizens get on board.

But perhaps the most effective way the Chinese government supports the electric-vehicle market is the vehicle quota system, which was implemented in heavily congested cities in 2011.

In Beijing, for instance, the government continues to limit the number of new gas-powered cars to just 40,000 a year.

It's estimated that every time a new license plate becomes available, 2,000 people are waiting in line for it... and the wait can run as long as five years.

This encourages Chinese buyers to consider getting electric vehicles instead. These have a much higher quota (and sometimes no quota at all) than gas-powered cars. And they come with large government-backed consumer discounts of between $2,000 and $2,800 per vehicle.

With such strong government support, a booming network of charging stations, and competitive prices, NEV sales in China will continue to soar.

This has been a hot sector in recent years. But the boom is just getting started. So for long-term investors, China's NEV market is a place to consider right now.

Did you miss it? Yesterday, Brian detailed how China is leading the way in electric vehicles... and how the rest of the world is sure to follow its example... Get the full story here: The Surprising Country Leading the World in Electric Vehicles.

China is also a major leader in digital spending. And right now, the Chinese government is doubling down on its cashless society in a way that might surprise you... Read more here: The Chinese Yuan Is Going Completely Digital.

Today we're looking at a company that's thriving despite the long-term "retail apocalypse"...

Regular readers know that the rise of e-commerce crushed brick-and-mortar retailers that didn't change with the times. But not every retailer had to move online. The best businesses are pulling through just fine... and even thriving. Today's company is doing just that...

Five Below (FIVE) is a $12 billion discount retailer selling mainly to teenagers and tweens. Its main draw is its range of fun, trendy products under $5. This chain sells everything from T-shirts to candy to pool toys. And it's still going strong... Last quarter, Five Below reported a net sales increase of 64% to $598 million compared with the first quarter of 2019 (a better gauge than looking at 2020). And earnings per share increased 91% to $0.88 over the same period.

As you can see, FIVE shares are in a long-term uptrend. Shares are up more than 340% in the past five years – and they recently hit a new all-time high. As Five Below continues to carve out its niche in the retail space, it should survive the "death of retail" just fine... 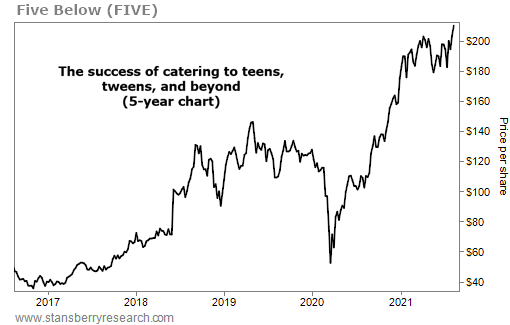