This is not a hypothetical...

Yesterday, I explained how China has moved to a mostly cashless society... and how it's planning to go completely cashless for the 2022 Winter Olympics hosted in Beijing.

That's just the start of the story, though. While China is mostly cashless today, you can still spend physical money here and there.

But that's changing... sooner than almost anyone would believe.

China's central bank has been developing its digital version of the yuan since 2014. It's called the Digital Currency Electronic Payment ("DCEP").

Its goal is to function exactly like cash, even when there's no Internet connection. And just like paper currency, it's completely centralized and controlled by the central bank.

To use it, people would download a DCEP digital wallet, just like any ordinary mobile app. From there, they could receive digital yuan from their banks instead of actual cash.

Beijing mostly kept this project under wraps until mobile payments became the norm in China instead of the exception... and after the pandemic highlighted the advantages of cashless payments.

You can see this shift in the chart below. It measures China's cash demand as a ratio between the M0 and M2 money supplies, which look at currency in circulation versus broad money.

Since 1996, Chinese citizens have become less and less dependent on using physical cash... 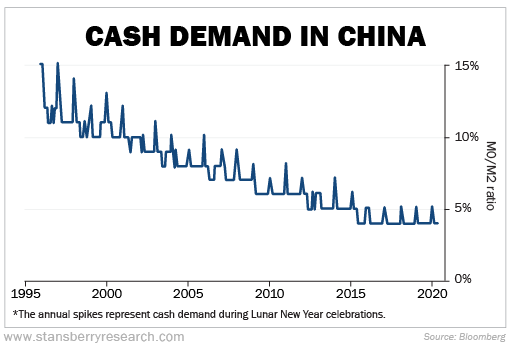 From a high of 15% about a quarter of a century ago, the amount of cash in circulation relative to broad money (e.g., cash, savings deposits, time deposits, and checking accounts) has fallen to less than 5%.

To put that figure into perspective, the same ratio in the U.S. currently stands at 27%.

This means the time is ripe for the digital yuan. But Beijing doesn't like to implement new ideas without testing the waters first... and getting a good sense of public sentiment.

So, last May, trials of the digital yuan were finally conducted in major cities like Shenzhen, Suzhou, and Chengdu. They were soon expanded to include Guangzhou, Hong Kong, and Macau.

Another trial was conducted in October in Shenzhen. The government gave away $1.5 million worth of digital yuan to 50,000 random citizens. The same was done in Beijing last month.

In Suzhou, one of the initial pilot cities last year, an even bigger second trial took place in February. That time, e-commerce giant JD.com (JD) handed out a total of $4.6 million worth of digital yuan to random individuals who had downloaded the DCEP digital wallet.

From what we've been hearing, these trials were greatly successful.

Now, as I covered yesterday, we're hearing that Beijing intends to launch the digital yuan in time for the 2022 Winter Olympics. And the central bank says it guarantees that the digital yuan can buy whatever you can buy with ordinary banknotes... and that no merchant can reject the digital currency.

Look, I'm no financial policy expert. But when China's central bank says no merchant can reject the digital currency, you can bet your money that's going to be the case.

Both of the country's major payment apps, WeChat Pay and Alipay, have already agreed to help facilitate the digital yuan through their online banks. It doesn't replace what the two mobile-payments giants do. It simply allows Chinese consumers to use the cash they already hold in their pockets to pay for things digitally.

So the "powers that be" are behind the digital yuan. And China is already committed to mobile payments. That pretty much makes it a done deal.

It's coming... It's inevitable... And the full weight of China's government is behind it.

If you're an American, you might wonder why you should care. But know this: If it works in China, it's likely coming to America soon.

A cashless system makes sense in our digital world. And it allows the government to keep even closer tabs on our money.

I'm not saying that's a good thing. But it'll soon be a reality in China. And the rest of the world won't be far behind.

The change from a cash-based society to a cashless one happened shockingly fast in China. It's likely that some people there have never even held physical cash in their hands. And that makes it a great place for the birth of a national digital currency... Check out yesterday's essay about China's move to a cashless economy right here.

"If you want to thrive as an investor over the next decade, you need to think outside the U.S.," Brian writes. China's market is massive – and it's still growing. That gives investors a chance to seize new opportunities in all kinds of industries... Read more here: The Plastic Surgery Capital of the World Is Moving East.

Market Notes
THIS TECH GIANT IS RIDING A 'WAVE' OF TRANSFORMATION

Today, we’re looking at a top player in the tech industry…

We’ve often shared how you can make powerful returns on what Dr. David Eifrig calls “digital utilities.” Similar to how utility companies provide necessary services like electricity and water, digital utilities provide the technology and software we depend on each day. Take today’s company, for example…

Microsoft (MSFT) is one of the world’s biggest tech companies, providing the computers and software we use on a daily basis. Its popular Microsoft Office software suite is used in more than 1 million workplaces around the globe. As CEO Satya Nadella said in a recent press release, we’re seeing a “second wave of digital transformation.” And that has been a major boon for Microsoft… In the most recent quarter, the company’s profits came in at $15.5 billion – up 33% from the same period last year.

As you can see, shares of Microsoft are up roughly 400% over the past five years, including dividends. They recently hit a fresh all-time high. As long as Microsoft keeps selling the tech we can’t live without, expect MSFT to head higher… 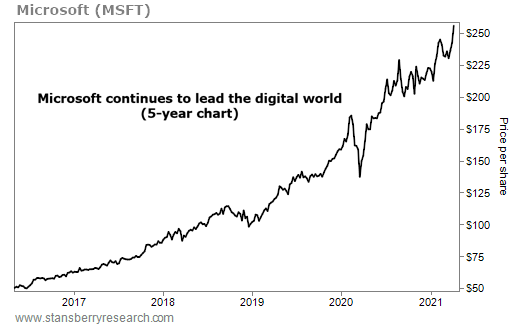