The Plastic Surgery Capital of the World Is Moving East
By Brian Tycangco
Monday, March 29, 2021

"You've got something on your eye, honey," I said as my then-girlfriend – now wife of 17 years – got into the car one morning on the way to work. "Here, let me remove it."

"Don't touch it! I put it there on purpose," Jecelle (pronounced "Giselle") snapped as she shooed my hand away.

It was a thin strip of Scotch tape she had cut out and placed right along the tip of her eyelid.

She didn't mind the funny look I gave her. For her, that thin piece of tape had one very important purpose. And never in a million years would I have guessed what it was...

These are also called monolid eyes – an eye shape where the eyelid doesn't have a crease. It makes the eyes appear narrower. More than any other facial feature, it's the eyelid that easily distinguishes East Asians from Westerners, who typically have double eyelids.

Jecelle's Scotch-tape method guaranteed a cheap, painless – albeit temporary – way to get around this common aesthetic trait.

The tape trained the skin on her eyelid to fold at a certain point. She'd remove the tape as soon as she got to the office. And amazingly, the fruits of her early-morning ritual would last the entire day. (I hope my wife will forgive me for sharing one of her beauty secrets.)

Now, just the fact that my wife would go to the trouble of carefully placing two tiny strips of tape on her eyelids every morning told me how big of a deal this was for her.

She also confessed she would have liked a more permanent solution. And you might not know this... but she's not alone. Millions of people seek out double-eyelid surgery.

But 20 years ago, plastic surgery for the eyelids wasn't common in Asia. So it was difficult and expensive at the time to find the right clinics and doctors to do the job.

Billboards and online ads for plastic surgery are everywhere. You can get double-eyelid surgery, nose jobs, breast augmentation, and liposuction using the latest technology.

Hundreds of millions of people – mostly women – seek out all kinds of cosmetic procedures in Asian countries. And whatever their personal reasons for doing so, they're willing to pay huge amounts of money, especially in the age of smartphones and social media.

This cultural and economic shift has catapulted China to become the world's biggest market for cosmetic surgery.

That's right… The U.S still has roughly 18 million cosmetic procedures performed every year. But the epicenter of plastic surgery has already shifted away from the U.S. The new plastic-surgery capital of the world is China.

As of 2018, around 22 million Chinese people received cosmetic surgery. And the growth trajectory is unbelievable. Take a look... 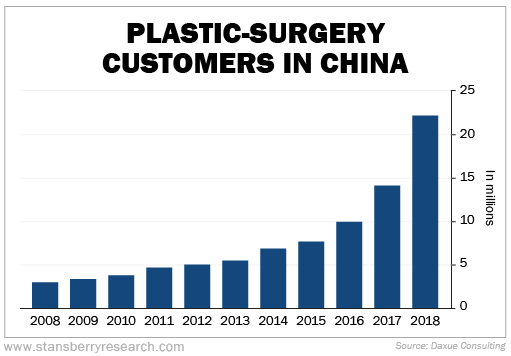 Plastic-surgery customers were up eightfold from just 3 million a decade prior. That's 22% annualized growth!

In 2019, the number of procedures hit 25 million. That's roughly 40% more than the number of cosmetic surgeries we have in the U.S. each year.

The crazy part is that China didn't even have a plastic-surgery industry to speak of in 1980. And now, it's the country with the highest number of procedures.

One of the most popular is – you guessed it – the double-eyelid surgery. That makes up 18% of the facial plastic surgeries performed in China. But it's not just the eyelids that Chinese consumers are looking to change... Having a contoured face and a beautiful nose are proving to be even more popular.

I'm not telling you this today to make a point about day-to-day beauty trends... or even simply to show you how much this single industry has transformed.

I'm telling you this because the world is changing. And investors focused solely on the U.S. are missing huge moneymaking opportunities just like this one.

The reality is that China's huge and growing market is beginning to dwarf the U.S. in plenty of categories. It has already happened for plastic surgery. And many more industries are shifting fast.

If you want to thrive as an investor over the next decade, you need to think outside the U.S. Some of the biggest investment opportunities are happening on the other side of the world, in China.

With U.S. stocks near all-time-high valuations, we're seeing a major imbalance with other global markets. And if you're looking for a good deal on a growing market, you'll want to look here... Learn more: Buy This If You're Worried About Expensive U.S. Stocks.

Chinese stocks aren't the only great deal on the market today. History tells us that a valuation anomaly between U.S. stocks and this market means it's set to outperform in the near future... Get the full story here: This Market Is About to Beat the U.S.