Buy This If You're Worried About Expensive U.S. Stocks
By Chris Igou
Monday, February 22, 2021

The rally in the U.S. stock market has been impressive...

The S&P 500 is up 78% since bottoming in March. That surge has sent valuations in the U.S. through the roof.

Even more, it's causing a major imbalance between other world markets.

Chinese stocks, for example, have also been moving higher. But their valuations are nowhere near what we are seeing in the U.S.

In fact, Chinese stocks trade at a 61% discount to their U.S. peers today. That’s one of the largest discounts we’ve seen over the last 15 years. And it’s a strong tailwind for this market over the next year.

Simply put, if you’re worried about the price of U.S. stocks, you need to consider China right now.

The U.S. often carries a valuation premium to other markets. And that’s how it should be. It's the most important stock market in the world, and the largest by a long shot.

The two premier exchanges in the U.S. have a combined market value of $40 trillion. For comparison, the Shanghai Stock Exchange, China's largest exchange, has slightly less than $5 trillion in market value.

So it's no surprise that the U.S. sports a higher valuation than most markets. But today's valuation gap between the U.S. and China is far from normal.

We can see this by looking at the price-to-earnings (P/E) ratio for each market.

Since 2005, Chinese stocks have traded at an average discount of 30% to U.S. stocks based on this measure. Today, they are trading at a 61% discount. Take a look... 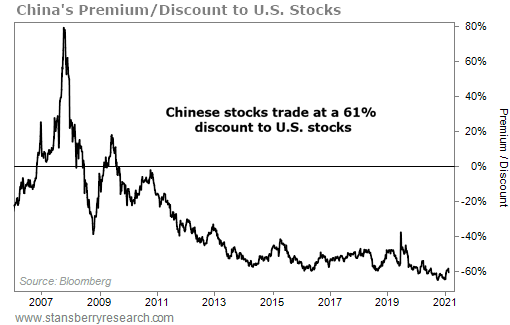 As you can see, the discount has largely been widening since 2007. But when the discount nears today's levels, we tend to see a rally in Chinese stocks.

Take a look at what happened in 2014. Chinese stocks were trading near a 60% discount to U.S. stocks that May. Then, prices started to make a comeback...

We saw another example of this play out in 2016. The valuation gap was back near record levels. But that didn't last long – Chinese stocks turned higher shortly after...

China's market rallied 31% in a year following that extreme. And the discount dropped to nearly 40% over the same time.

Today, the valuation gap between U.S. and Chinese stocks is near its largest on record. China's market trades at a 61% discount to the U.S.

This won't last long, based on history. And it’s likely to reverse with a major rally in Chinese stocks. We could see a double-digit run-up in China from here.

If you’re interested in making that bet, the iShares MSCI China Large-Cap Fund (FXI) is the simplest way to do it. It holds a basket of China’s major large-cap companies.

Now, I realize a lot of folks don’t like the idea of investing in China. But today’s opportunity is a good one. And if you’re getting worried about valuations in the U.S., it’s a no-brainer.

"It seems like just about every asset had a banner year in 2020," Brian Tycangco writes. By now, you know that the good times in U.S. stocks will come to an end eventually. But that doesn't mean you won't find chances to profit... Read more here: This Trend Doesn't Scare Many Americans... But It Should.

"The trends that have driven the country forward aren't going away," Steve says. You may not like it, but it's hard to deny that China is gaining ground as a world leader. And that trend is only going to continue in the future... Get the full story here: A Massive Tailwind for Investment in China.

Not many… It’s a bull market, you now!