A First in Olympic History
By Brian Tycangco
Monday, April 12, 2021

A lot of people thought it was a waste of money... But not China.

Beijing hosted the Summer Olympics in 2008. The Chinese government spent years preparing... And it spared no expense.

The direct costs of the event came out to $40 billion. It was the most expensive Olympics ever held at the time. China knew this was its chance to showcase itself to the world. It could prove it was no longer a poor and "backwards" nation, but instead, a major superpower.

Moreover, all that spending to modernize Beijing and its surroundings continues to pay dividends.

Today, with 22 subway lines, it's as easy to get around Beijing as it is any Western city. And months before the pandemic hit, Beijing's brand-new Daxing International Airport became capable of handling up to 100 million passengers each year – more than doubling the city's capacity.

After years of nonstop development, it's hard to imagine what else Beijing could build before its next chance to shine...

You see, Beijing will host the Winter Olympics in just 11 months. This time around, the expected price tag is a modest $3.9 billion. That's no surprise – again, most of the infrastructure is already in place.

But if Beijing gets its way – and it usually does – there will be one new aspect to the Olympics set to take place next year...

Today, I'll share why that crazy thought is a near certainty...

China has been working on this project for a while. And now the Olympics have become the goal to get things off the ground.

In short, China's government has been setting the stage for this major change to how people use money in the world's second-largest economy. But what might surprise you is that China's already mostly cashless...

That word – cashless – sounds completely normal to anyone who knows China today.

The country is ground zero for the revolution in cashless payments (also called mobile payments) that is now sweeping many parts of the world.

Two years ago, Kevin Lu, an analyst at CICC (China's largest investment bank), spoke to us about what it's like...

"Not only in Beijing, but even in my hometown, I don't need to carry a wallet at all," he said. "The only thing that concerns me is the battery of my mobile phone."

It was part of a documentary called New Money: The Greatest Wealth Creation Event in History. Steve produced it with Stansberry Research to help investors get a better understanding of the breathtaking changes that were going on in China.

(If you haven't seen the documentary, I highly recommend it. It has more than 9 million views on YouTube. And it will probably be one of the best hours you spend watching anything online. You can see it here.)

Cashlessness became a reality in China thanks to the country's two main mobile-payments systems, Alipay and WeChat Pay.

They're owned by China's two largest Internet companies, Alibaba (NYSE: BABA) and Tencent (HK: 0700). Alipay and WeChat Pay work as apps on your phone that are linked to your bank account or credit card.

Each has more than 1 billion users in China, which shows just how widespread they've become in the country. And an increasing number of businesses no longer accept physical cash as a form of payment – only Alipay or WeChat Pay.

The speed at which the country has shifted from a cash-based society to a cashless one is simply incredible. Just look at the chart below... 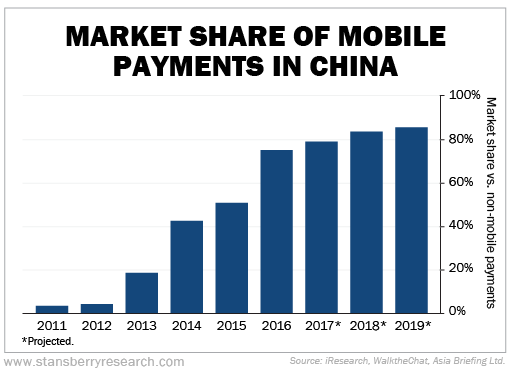 In less than a decade, China's consumers went from paying almost exclusively with cash (and, more rarely, credit cards) to paying for almost everything through their mobile phones.

Heck, there are probably people in China who have never even held cash in their hands.

Now, China's goal is to host the Olympics with no cash at all... And I'm betting it'll happen.

Even more, this wholesale acceptance of digital payments makes China fertile ground for a national digital currency – the first of any major economy. And as I'll explain tomorrow, the wheels are already in motion.

China's cashless payments might sound like a fad used only by ultra-modern city dwellers. But that couldn't be further from the truth. And it's a big reason why the mobile-payments trend isn't going away anytime soon... Get the full story here: The No. 1 Reason China Dominates Global E-Commerce.

The U.S. has been lagging behind China when it comes to cashless payments. But over the past few years, that has been changing. And this trend is only going to get bigger from here... Check out Chris Igou's two-part essay on mobile payments in the U.S. here and here.