You've probably never heard of the Longji Rice Terraces in China's Guangxi Province. But they could easily qualify as the Eighth Wonder of the World...

The terraces rise along the vast mountain slopes of Longsheng County. People first began digging them during the Yuan Dynasty more than 600 years ago – and the work continued for hundreds of years. They look like gigantic, green-carpeted staircases rising to the heavens.

The rice harvested in these slopes has sustained two of China's oldest ethnic tribes for generations. But what's more interesting is how technology is completely changing the lives of those that live here.

This area has become a popular tourist attraction in recent years. I went there with my family in October.

We set out on a cool and misty morning. A thick fog was sitting on the top of the mountain as we looked off from the viewing deck.

Billy, our local guide, wasn't worried. He knew a hidden path that took us on a 30-minute hike along the side of the mountain. I have to admit, it was an experience of a lifetime just to walk in the middle of these centuries-old terraces.

I took this photo from the mountainside... 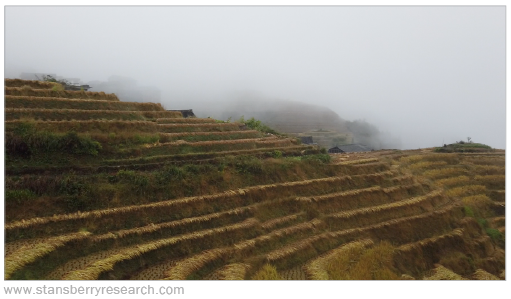 "Ten years ago," Billy said, "the people here had to hike down 10 hours to a nearby town in order to buy meat and supplies."

He explained how the locals used to buy a pig and carry it all the way to the top, where they would cut it up and cure it. The preserved meat would last them through the winter, saving them from making the hard journey into town in near-freezing temperatures.

But now, they don't have to do that anymore...

Well-built roads and bridges have turned the grueling 10-hour hike into an easy 40-minute van ride – even faster if you're on a motorcycle. For anything they need urgently, villagers can just hop on a small commuter bus into town and back.

Meanwhile, cashless-payment apps like WeChat Pay and Alipay help local vendors with faster, secure transactions. Money gets credited instantly to their accounts, saving them a trip to the bank.

Not only that, but locals now purchase almost everything they need online, except for fresh food.

Even in this far-flung village – 50 miles away from anything that resembles a city – online delivery takes just a couple of days. And nearly everyone there has a smartphone.

"This is amazing," I said to myself. Here I was, in one of the most rural and isolated places in southern China, yet the people had access to many of the modern comforts I get living in the big city.

It became clear to me how China, even with its slowing economy, continues to defy the naysayers.

By the time China reaches a penetration level similar to that of the U.S. (around 84%), an additional 429 million Chinese will be using smartphones... more than the entire U.S. population!

And new Chinese smartphone users are destined to shop heavily online. That's because most of them don't live in big cities. They live in places like Longsheng and other rural communities, where the nearest mall might be hours away.

People living in the country may not be as well-educated and tech-savvy as city-dwellers. But they have money... And they can use the Internet to improve the quality of their lives.

I hope you see what I'm talking about. The market potential is huge.

That's an incredible tailwind for companies like Alibaba (BABA) and JD.com (JD) that serve those customers. And it makes me incredibly bullish on China's e-commerce market today.

Whatever you think about China, this isn't an investment trend to ignore.

"During my trip to Hong Kong last month, Chinese banks had their branches boarded up with thick, fiberglass material," Brian writes. If you picture Hong Kong as a warzone lately, you're not alone. But the thing is... the stock market doesn't seem to care... Read more here.

"If you're an American, you probably already have an opinion on the electric Mustang," Vic Lederman says. But our opinions don't matter here. Electric cars are going mainstream, and it's another trend we can't ignore... Learn more here.

Today, we’re looking at the idea of “investing in vice”…

Regular DailyWealth readers know we’ve highlighted the power of investing in habit-forming products and pastimes. Things like coffee, sugary soda, and even video games will always keep people coming back for more. The same can be said about gambling…

MGM Resorts (MGM) is a $17 billion casino and gaming giant. The company boasts some of the most popular casinos on the Las Vegas Strip like MGM Grand and the Bellagio. And it has popular properties all across the globe. This company is still drawing visitors in with its glitz and games… In the most recent quarter, MGM reported sales of $3.3 billion, up 9% from the same period a year ago.

As you can see in today’s chart, MGM shares have trended higher this year. The stock is up roughly 35% since January, and it recently hit a new 52-week high. As long as people keep flocking to casinos, this company should continue to thrive… 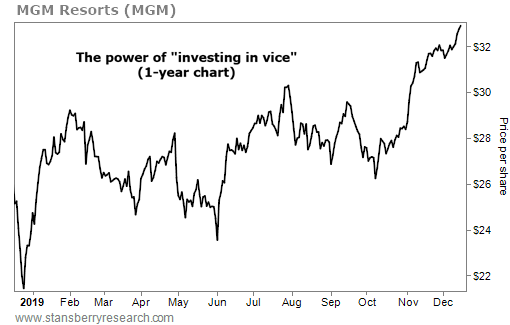