Love It or Hate It, You Can't Ignore This Massive Trend
By Vic Lederman
Monday, November 25, 2019

Ford is doing the unthinkable...

It's slapping the Mustang badge on an electric car – a four-door crossover, no less!

It's got mean-looking headlights, but softer edges than in years past. It looks sleek.

Ford unveiled the car last week. Did it take you by surprise? Or, was your knee-jerk reaction, "What are the kooks over at Ford thinking?"

Love it or hate it, Ford's decision tells us a lot about the future of the electric-vehicle ("EV") market. The reality is, it's a trend you simply can't ignore.

If you're an American, you probably already have an opinion on the electric Mustang.

The Mustang is part of the fabric of American culture. Even non-car-people are at least aware of it. And turning the "American muscle machine" into a four-door crossover won't win everyone over. Take a look at the new design... 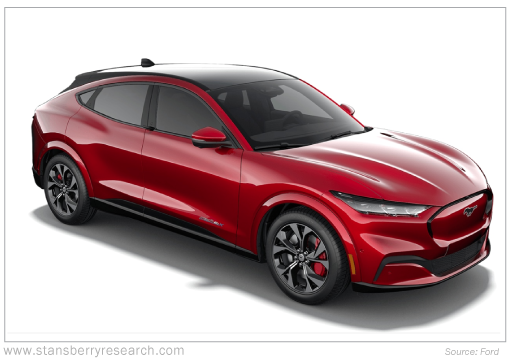 Personally, I like it. And if I was in the market for a new electric car, it would be near the top of my list.

But here's the thing... My opinion isn't all that important. Yours isn't either.

That's because the announcement from Ford Motor (F) isn't really about the Mustang. It's symbolic of a major change in the car market. One that's taking place right now... whether we acknowledge it or not.

Simply put, the electric car is coming. And today, it's coming from the original red-white-and-blue, gas-guzzling, all-American pickup-truck maker.

Electric cars are going mainstream. It's a new trend. And Ford thinks it's time to take advantage of it.

Now, investing is often about recognizing and capitalizing on trends. But more often than we'd like, our opinions and biases get in the way.

You might think electric cars aren't realistic. It takes time to charge them up, right? And what about keeping them charged on those long road trips?

Or maybe you think electric cars are only for weirdos from California. The eccentric CEO of Tesla (TSLA), Elon Musk, sure hasn't done anything to fix that.

So, it's totally understandable if you think electric cars are only a fringe market. And maybe at first, they were.

Today, it's a different story.

Near the end of 2018, the U.S. crossed the million-EV mark. There are now more than a million EVs driving on America's roads. And that is projected to double by early 2021.

Think about that. That's 100% growth in a little more than two years. Only the fastest businesses in the world have growth rates like that.

By 2030, current projections from the Edison Electric Institute put the number at roughly 18.7 million EVs on the roads. That will be about 7% of all vehicles in the U.S. It gets bigger, though...

This is a massive trend. Ford is trying to get ahead of it. And in doing so, it's taking a gamble. Again, the company courts a specific kind of customer. Historically, that customer hasn't been too keen on acknowledging the EV trend.

Ford is betting that's no longer the case. And it's gambling with a brand that touches the heart and soul of the company.

Now, the car looks pretty good. It's well featured. And its pricing is competitive with the other mid-tier luxury EVs out there.

That means the new Mustang is a perfect "canary in a coal mine."

Ford is betting that mainstream America is ready to acknowledge the EV trend. And all we have to do is sit back and watch the results come in.

"Future autonomous vehicles ('AVs') will essentially be data centers on wheels," Matt McCall writes. Self-driving cars will have a lot of "thinking" to do. That's why the technology behind the future of cars presents a promising opportunity... Read more here.

"When it comes to extreme wealth creation, you can't do much better than simply owning a small company that grows large," Matt writes. And thanks to another kind of innovative technology, the odds are high that we'll see dozens of small companies turn into big winners over time... Learn more here.