What's the best predictor of a recession?

Economists and PhDs could debate this for days. Some claim consumer spending is the most accurate predictor. Some claim it's the labor market. And others use a bunch of indicators weighted together, like the Conference Board's Leading Economic Index.

Still, no one indicator is universally accepted as the early warning sign of an economic downturn.

But one indicator has flashed a warning sign before just about every recession over the past 60 years...

This indicator is the yield curve.

DailyWealth readers have heard about this idea before, thanks to my colleague Steve Sjuggerud.

Today – for investors who are watching what this indicator is doing right now – I'm going to share my three specific tips for how to invest going forward. And I'll give you my personal take on what to expect as this bull market continues...

Typically, long-term rates are greater than short-term rates because investors demand to be paid more for locking their money away for a decade or more. (The longer duration means they are taking on more risk.)

Lately, we've seen a bit of panic in the news because the yield curve is "flattening." This means that the gap between long-term yields and short-term yields is shrinking.

The spread is currently at its flattest level in about 11 years. Back in 2011, the spread was near 3%.

According to investment bank Piper Jaffray, the probability of a recession increases substantially as the spread falls below 0.2%.

In fact, almost every recession in the past 60 years was preceded by an inverted yield curve.

Over the past six decades, we've seen only one exception... In the mid-1960s, the curve inverted, which was followed by an economic slowdown but not an official recession.

You can see the accuracy of the yield curve by looking at the past three recessions... 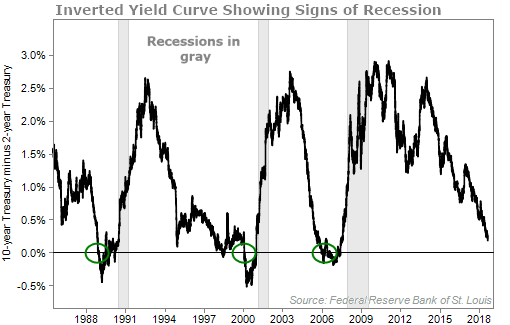 To be clear, once the yield curve inverts, the economy doesn't automatically enter a recession. It can happen in as little as six months or up to two years.

The last three times, it took about a year and a half for a recession to begin, on average.

So what does this all mean?

It means we're not on the cusp of a recession yet. We're getting closer, but we're still probably a couple years away. As the Fed continues to jack up short-term rates, eventually the yield curve will invert... and then we know it's only a matter of time before a recession starts.

Now, for investors, I want to share three major takeaways...

Banks become less profitable as the yield curve flattens, because they essentially borrow money at short-term rates and lend it at long term-rates. When the spread tightens, there go the profits. And as the curve inverts, lending money is a losing proposition.

This one is important. The landscape is changing. And the warning signs for a market downturn are flashing.

Be selective. Be defensive.

That leads us to my last tip for investors right now...

The bull market is not over yet. And as regular DailyWealth readers know, Steve believes that the final innings of a bull market produce the largest gains – known as the "Melt Up."

Folks who read my newsletters know that I haven't stopped recommending stocks, despite my changed outlook. Now, I simply need to find a favorable reward-to-risk setup before I feel confident recommending anything. (For stocks, Steve often says that he likes to set a reward-to-risk ratio of about 3-to-1.)

If you are buying your highest-conviction ideas, don't be scared to still be in the market.

Editor's note: Imagine owning a stock that paid you so much in dividends, it could fall to zero – and you'd still double your money. As investors everywhere fret about the future of stocks, Doc and his research team are exposing this lucrative secret. It explains how a special class of companies was able to grow dividend payouts by up to thousands of percent over the past decade... Click here for more details.

The yield curve has predicted almost every recession and stock market bust since 1980. "Nothing comes close to this indicator's accuracy," Steve writes. Learn more about this man-made problem here: Even the Fed Knows Its Big Idea Is a Bad One.

A negative yield curve would be a disaster for stocks. But as Steve explained in July, the market could still march higher for a while longer. Find out why here: Exactly When the Stock Market Will Peak, Revisited.

Today, we’re highlighting the power of one of our favorite investment strategies…

Longtime readers know we often highlight the idea of investing in companies that sell physically addictive products like cheap coffee and fast food. On the flip side, psychological addiction is another powerful motivator. In this case, we’re talking about the impulse to have fun…

Take-Two Interactive Software (TTWO) is the $15 billion video-game maker behind some of the most popular titles on the market – such as Grand Theft Auto V and NBA 2K18, both of which are among the 10 bestselling games of 2018. Next month, Take-Two will release the highly anticipated sequel to Western-themed shooter Red Dead Redemption.

As you can see, TTWO’s popular titles have pushed the stock higher. Over the past two years, the stock has soared more than 200%, recently hitting a new all-time high. If future game sales can live up to the hype, TTWO shares should continue their uptrend… 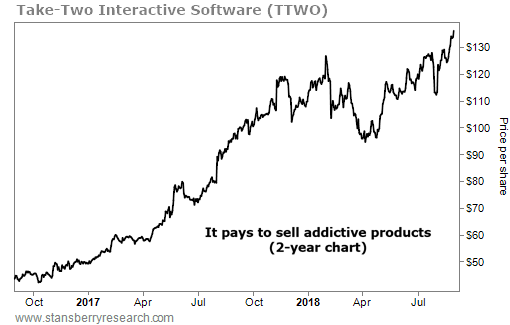