A Worrying Sign for Stocks
By Chris Igou
Thursday, December 5, 2019

Stocks have been hitting new highs recently, and the Melt Up is in full force.

That's a positive sign for the next year or so. Don't expect a one-way ride higher, though. In fact, one worrying sign could mean we're about to see a bump in the road for stocks.

You see, traders are all betting the steady rally will continue...

The S&P 500 is up around 25% in 2019. It's been a one-way move higher for the past couple of months. And traders are betting that smooth ride is here to stay. In fact, bets on low volatility are now at record levels.

Futures traders have lost all fear of a pullback. And that could be a short-term warning sign for the broader U.S. market.

The CBOE Volatility Index ("VIX") is a simple way to gauge fear in the market. Volatility spikes usually occur when investors panic. And panic often comes with widespread price swings in U.S. stocks.

We haven't seen those kinds of big swings lately, though. U.S. stocks have climbed higher and higher. And the VIX has stayed at low levels for months.

Today, futures traders are betting the easy money will continue. Fear of any major spike in volatility is gone.

We can see this through the Commitment of Traders ("COT") report on the VIX. It's a weekly report that tells us what futures traders are doing with their money. And it's a great contrarian tool.

You see, when these traders are all betting in one direction, the opposite is likely to occur. And right now, futures traders are "all in" on lower volatility. Take a look... 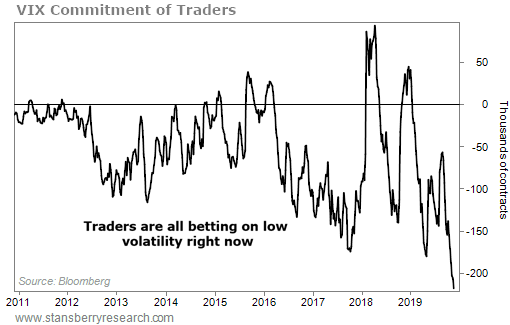 Record bets on low volatility have flashed short-term warning signs in the past...

Stocks peaked a few months later, and we saw our first correction in roughly two years.

This isn't a long-term signal, though. We're still in the thick of a Melt Up. And we expect to see much higher stock prices before the ultimate peak in U.S. stocks.

Melt Ups aren't just a one-way move higher. Heck, the late '90s Melt Up saw five corrections before the ultimate peak of the dot-com boom in 2000.

Based on what's happening right now, we could be in for a correction in the coming months. Just remember – that's normal, even during a Melt Up... And it'll likely just be a bump in the road before the market hits new highs again.

"Despite the rough patches, stocks are headed up," Vic Lederman writes. A correction doesn't have to mean the end of the Melt Up. Right now, we're seeing bullish signals in some of the world's most important economies... Read more here.

"I'm going to tell you to do the opposite of what has been going on in the market," Dr. David Eifrig says. "Now is not the time to panic." Even with the signs of slowing growth and recent pullbacks, we're not in recession territory just yet... Learn more here.

Regular readers know that it doesn’t take a flashy business to make great returns. Businesses that sell the basics, like soda, snacks, and soap can be fantastic investments. People buy these things for everyday use, so they’re in constant demand. And today’s company sells one of the most basic of the basics… frozen food.

Lamb Weston (LW) was founded in 1950 as a family business… but today, it’s one of the world’s leading suppliers of frozen potato products. From crinkle cuts to steak fries to shoestrings, Lamb Weston has french fries for almost everyone… And business is good. The company recently released solid quarterly results for the first quarter of fiscal 2020, with net sales up 8% to $989 million.

As you can see, LW shares have consistently marched higher… They’re up nearly 200% over the past three years, including dividends. And as stores and restaurants keep restocking on french fries, that trend should keep going… 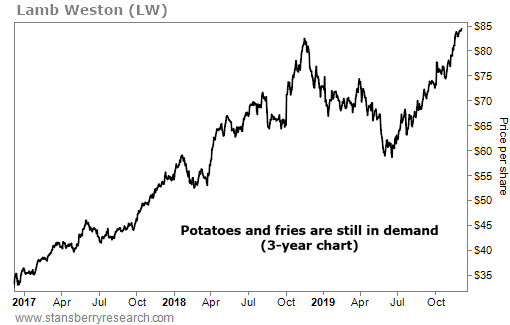