Major Downside Ahead in This Beaten-Down Commodity
By Brett Eversole
Tuesday, June 25, 2019

What can one day's price action tell you about the future?

Most of the time, the answer is nothing. On most days, price moves are noise, nothing more.

If Apple (AAPL) falls 0.2% today, it doesn't tell you anything about future growth. And if Microsoft (MSFT) rises 0.5%, it doesn't say much about investor sentiment.

But every once in a while, when you have a huge daily change, it can tell you something about the future...

That's the case in a certain beaten-down commodity right now. It just saw its worst one-day fall since 2015.

This one-day fall says prices could decrease another 20% over the next year, based on history. And that makes this one of the rare cases where a single day's price action actually matters.

The price of coffee crashed 6.2% on June 5. It was a major change in direction for the commodity.

Coffee had been making a solid move higher. It had just soared 20% in less than a month. And that May rally was one of the rare signs of life the commodity has seen in recent years.

Like many commodities, it has been falling... and falling. Prices have been more than cut in half over the past five years. So a quick 20% rally had folks interested and excited.

It was a short-lived move, though. Take a look at the massive one-day fall we saw earlier this month... 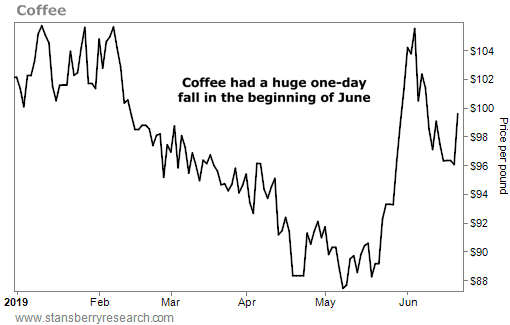 The uptrend was in place... It was the first sustained move higher in almost a year. But that changed in a single day. And this is one of the few cases where a one-day move actually matters.

That's because one-day crashes this huge are darn rare. They've happened less than 1% of the time for coffee... And they've been even more rare in recent years. We've only seen three similar moves over the last decade.

History says these falls are an ominous sign of a continued downtrend. Coffee prices tend to plunge after massive one-day falls. The table below shows it...

Like many commodities, coffee has a history of going nowhere over the long term. The commodity has actually seen a typical annual loss of almost 1% over the past 38 years.

That aside, major one-day falls tend to precede much larger losses than normal. Similar instances led to losses of 2% in three months, 7% in six months, and a significant 20% loss over the next year.

These are awful results... And they show how important the trend can be in this commodity.

Usually, one-day moves are useless. They're just noise. But when you see a major one-day move, it can mean something for the future.

In the case of coffee, this month's massive one-day fall says more losses are likely. The commodity is already beaten down... But don't expect the pain to end anytime soon.

"If you want to beat the pros, you've got to stop competing with them," Chris Igou says. "Examining investor sentiment is one of the best ways to do just that." Right now, investors fear one place in the world... but it's a likely setup for big upside ahead. Learn more here: The No. 1 Place to Bet Against the Crowd Now.

"Stocks around the globe took a hit last month," Brett writes. "The U.S. has already recovered well in June. But a lot of folks are still worried about what happens next." He recently shared an asset class investors can put money to work in outside of stocks... Learn more here.

Market Notes
THIS 'SNACK AISLE' STOCK IS BREAKING OUT IN 2019

You don’t need to invest in the next hot IPO to make money. (In fact, investing too much in these fad stocks can be a huge mistake.) We’ve covered companies that “sell the basics” before – like soft-drink makers Coca-Cola (KO) and PepsiCo (PEP). Today, we look at another company with this tried-and-true business model…

As you can see in today’s chart, MDLZ has soared so far in 2019. The stock is up almost 40% this year alone, and prices recently hit a new all-time high. As long as people still head to the snack aisle, this stock should continue to succeed… 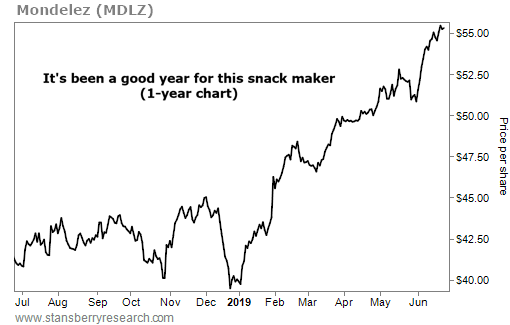