Amazon's Profitability Is an 'Iceberg' Under the Surface
By Joel Litman
Thursday, February 10, 2022

Amazon has changed retail, but has it paid off?

With just a few clicks, you can have just about anything delivered to your doorstep in two days, if not sooner. It's the new normal to shop for household goods, furniture, electronics, clothes, and practically everything else without leaving our homes.

Thank Amazon (AMZN) for that.

Many people tend to think of Amazon as an e-commerce company. With total control of its supply chain, it can ship any manner of goods worldwide at the cheapest possible price.

But offering goods as cheap as possible led many to assume Amazon has razor-thin margins. This attitude is summed up in a May 2017 Forbes article titled "The Amazon Era: No Profits, No Problem."

The assumption is that Amazon is too big, too sluggish, and has far too low margins to succeed by the "conventional" rules of the game.

So, is that true? And if it is, then how do we explain the stock's incredible long-term boom?

Amazon appears to be a normal e-commerce business...

Looking at as-reported metrics, it would make sense to think Amazon is a low-margin e-commerce business that doesn't make any money.

Profitability appears to have languished, with its return on assets ("ROA") hovering around the cost of capital at 5%. Take a look... 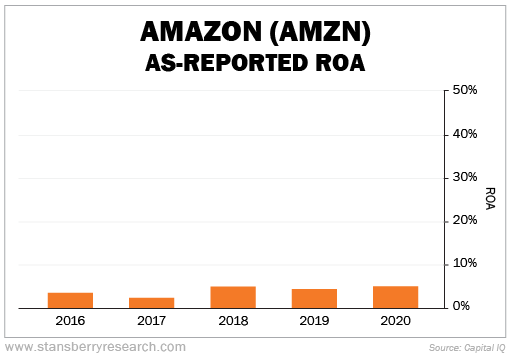 Despite dominating the e-commerce industry, Amazon seems to be just getting by and barely making a profit.

The as-reported metrics seem to confirm the story about how Amazon is competing on razor-thin margins.

And yet, Amazon's stock continues to rocket higher.

So how has Amazon managed to take the spot as the fifth-largest publicly traded company?

To find out, we have to look at the company's true profits. That's why our team at Altimetry uses Uniform Accounting. It's a method that helps us look under the surface... and filter out the distortions that plague traditional accounting.

Uniform Accounting shows us Amazon is more profitable than as-reported metrics lead us to believe. Returns haven't been at the cost of capital levels and range from 10% to 40%. Take a look... 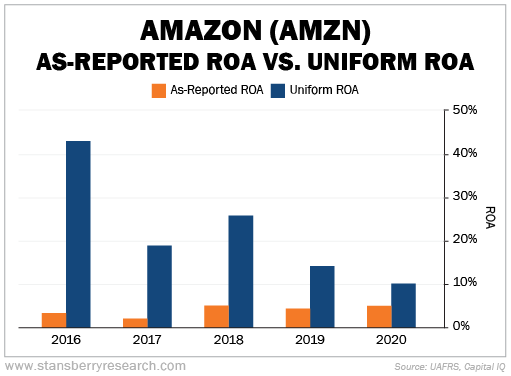 In 2020, Uniform ROA was twice that of as-reported metrics. And in the past five years, Amazon has seen returns as high as 43%.

So, where is the profitability coming from?

Amazon makes about $140 billion per year from its e-commerce division, but that's only about half of what it pulls in each year.

The rest comes from the slew of Amazon's other divisions that people often overlook.

In 2006, Amazon launched Amazon Web Services ("AWS"), offering IT infrastructure services to businesses. While it didn't receive much press at the time, AWS runs more than 9 million websites today... and dominates the cloud-computing market with 33% market share.

Given the asset efficiency of AWS, it makes a ton of money for Amazon.

Amazon Prime started as a subscription service that offers members free one- and two-day shipping. However, Prime now also comes with music and video streaming on top of other benefits.

Amazon has positioned itself to be far more than just an online retailer. In doing so, it has created a network effect that keeps customers coming back and buying into its other business divisions.

Its stock has gained as much as 219,000% since its initial public offering in 1997. Amazon's high return is not solely because of its dominance within e-commerce... Its hidden businesses are powering the engine. 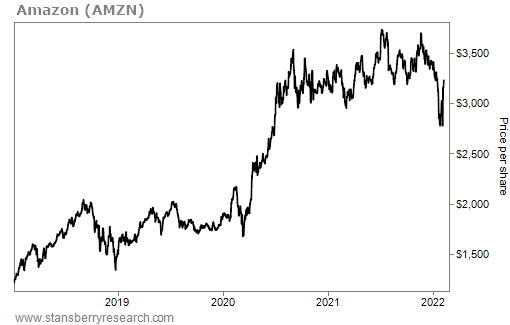 Amazon is what we like to call an "iceberg" stock. Most people know about its e-commerce division, but that's just the tip visible from the surface. Multiple other divisions are the true drivers of Amazon's success.

Investors fail to factor in the profitability of Amazon's other divisions... which is why the stock has gone up so much. The market is repeatedly surprised by what Amazon can do.

Editor's note: Amazon is a $1.6 trillion behemoth... So at this point, its biggest gains are behind it. However, based on recent back-testing of dozens of tech stocks, Joel and his team have discovered a niche sector with a 96% win rate... and an average gain of 759%. In a special presentation, Joel explains how this led his team to uncover the next winner with 20-bagger potential... Watch it right here.

Amazon isn't the only company making "hidden" profits. One software leader is expanding its niche with a new business model. And it's a lot more successful than traditional accounting suggests... Read more here.

Insiders at some of the market's largest companies have been selling shares recently. That makes investors jumpy. But as Joel explains, it's not always the sell signal you might expect. Learn more here.

Regular readers know we like to check in on financial giants. We look at companies like JPMorgan Chase (JPM) and Bank of America (BAC) as “financial backbone” indicators… When these businesses are performing well, so is the economy. Today’s company shows that folks are getting back out there and spending money…

American Express (AXP) is a $150 billion financial behemoth. It’s the world’s largest payments network. While it’s best known for its credit cards, it also offers a range of financial services. So when this company is thriving, it’s a positive sign for the economy. That’s the case today… American Express posted $42 billion in revenue for 2021, up 17% year over year. And it saw record card-member spending… along with an increase in folks using travel benefits.

As you can see in today’s chart, AXP shares are surging. They’re up more than 50% over the past year. And they recently hit a fresh all-time high. As people keep spending despite the pandemic, it’s a good sign for the economy… 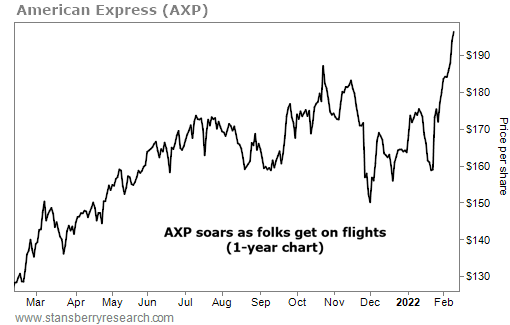