Insiders were shedding shares as 2021 came to a close...

Company executives tend to enjoy generous compensation packages. In addition to some of the highest salaries in their companies, executives often have annual and long-term bonus plans.

And, while cash bonuses are common, public companies often compensate their top employees with stock.

In other words, they pay these folks in company shares to incentivize them to do what's best for the stock price long term.

Executive ownership levels are public knowledge. And we can learn a lot about management's intentions by seeing where they're putting their money.

But while a lot of investors get jumpy at the first sign of insider selling, it may not always mean what you think.

A recent stat about insider activity has raised a lot of eyebrows...

Last month, data came out that management teams and other insiders in corporate America sold a mind-blowing $69 billion of shares in 2021.

All this selling has two possible explanations. One is that the market has become too lofty. The second is that insiders found an opportunity to grab the cash and run.

Both these ideas suggest that management teams are selling high... thinking the equity markets can't get much better than what we've seen already.

A more plausible explanation has to do with taxes. Wealthy insiders could be looking to lock in capital gains before potential tax hikes come into play.

What's more important is that the selling doesn't seem to be part of a larger trend. It appears to be a concentrated decision by a select group of individuals.

A lot of the insider sales came from only four people or groups...

Each had unique reasons for unloading shares. Bezos, for example, has been using his Amazon stock to help fund his space adventures, while Musk publicly announced having to sell stock to pay for his upcoming tax obligations.

These billionaires had clear goals in mind that required liquidity. And that means this historic selling activity likely isn't a sign that the market has peaked.

In reality, all of these players remain massively invested in their companies...

That's a lot of money to keep in the game... especially for anyone worried about an impending market crash. It would cost them tens of billions of dollars.

Not only that, but insiders are buying shares, too...

It's important to factor in the level of insider buying activity. One informative metric is the ratio of insider buying to selling. Looking at this can give us some signals as to whether management teams are truly bullish or bearish. 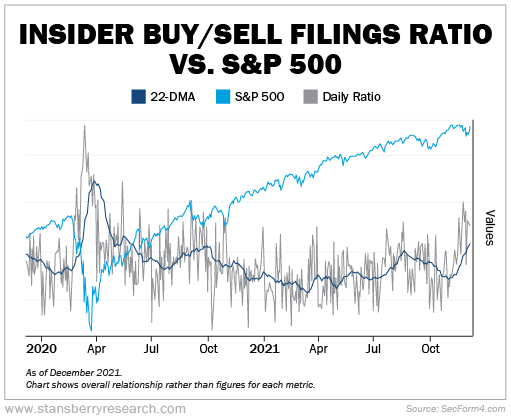 As you can see, the dark blue line spiked during the depths of the market crash in 2020. This means insiders started buying massive amounts of shares while the rest of the market was in a panic.

For most of 2021, the insider buying-to-selling ratio has hovered slightly above or below average levels. (That's still true today.) The S&P 500 Index, meanwhile, has soared to new highs almost every month.

In other words, insider buying and selling is just another tool in any analyst's toolbox. While useful in context, insider selling activity isn't always the massive bear signal you'd expect.

Editor's note: Joel says if you know where to look, four magic words can help you "unlock" the huge profit potential of tech companies. According to his back-testing, when these words appeared in a company's public reports, shares rallied 96% of the time... with an average gain of 759%. Several winners jumped more than 2,000%. And now, Joel believes these four words are about to create a new tech superstar... Learn the details here.

Whenever the market moves, pundits scramble to predict where it's headed next. And with recent volatility, the financial media is looking for reasons to predict a crash. But don't be fooled by one recent "sign of the top"... Read more here: The Financial Media Is Wrong About This 'Market Top' Measure.

Traditional financial metrics often discount some of the biggest names in the hottest sectors of the market. Based on traditional reporting, this company looked like it had a mediocre 2020. But a closer look shows that it had a banner year... Get the full story here: Here's the Winner From the 'Great Reshuffling.'

On Monday, Johns Hopkins reported that the U.S. recorded more than 1.4 million new COVID cases. And the numbers continue to climb as the Omicron variant continues its spread. Today’s company is providing new drugs to treat patients…

GlaxoSmithKline (GSK) is a $114 billion health care and pharmaceutical giant. Its best-known products include over-the-counter products like Tums, Flonase, and Advil. But as the pandemic continues, it’s stepping up in the fight against COVID… with new drug-based treatments for those who get sick. The company recently announced that, along with its partner Vir Biotechnology (VIR), it will sell the U.S. government an additional 600,000 doses of sotrovimab (its monoclonal antibody for early treatment of COVID). This brings the number of doses to 1.7 million globally.

As you can see, GSK shares are in an uptrend. They’re up 27% in the past year, including dividends, and they just hit a new 52-week high. As GlaxoSmithKline does its part to help fight the pandemic, this trend should continue… 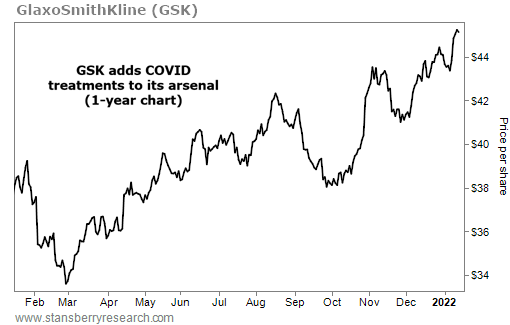