The Financial Media Is Wrong About This 'Market Top' Measure
By Joel Litman
Wednesday, May 5, 2021

The financial media still isn't clued in to the reality of the stock market...

Lately, investors have worried that the Federal Reserve could raise interest rates in the near future. One fear is that if rates go up, companies will avoid borrowing money to invest in growth.

Investors could also put their money in high-return bonds or savings accounts and only invest in stocks at more attractive prices. So, as the story goes, higher rates risk driving the market lower.

Many op-eds, news anchors, and pundits are looking to chase a story on potential rate hikes... And they're creating lots of fear about the market. They're still stirring up anxiety even after the Fed held rates steady last week.

The reality is, these folks are missing the point. The Fed raises rates when it expects strong economic growth... which drives corporate earnings growth.

In fact, the Fed raising rates is a bullish signal for the stock market in the short term.

But the media's doomsday predictions aren't only about interest rates. Recently, one publication pointed to another supposed "sign of the top"...

Barron's has come around to the right idea on interest-rate risk. It recently published a piece on why raising rates won't bring the economy to a screeching halt.

However, Barron's has substituted this concern with another – explaining why it believes the stock market is a bubble about to burst...

According to Barron's, investors should be spooked by the large amounts of equity being issued by corporate management teams. Barron's specifically highlighted battery developer QuantumScape (QS), electric-truck maker Nikola (NKLA), and cannabis company Canopy Growth (CGC) as three names that have used the recent rally to raise capital at attractive prices.

As Barron's argues, management teams traditionally love to try and time the top of a market to get the best possible price for an equity issuance. If they issue stock at what they think are inflated values and turn it into cash, they can "lock in" their position.

Given that management teams know the most about their companies, the article says this might be an early sign that the market could be turning.

Of course, the reality is different...

As any analysis of share buybacks and share issuances would show you, management teams have a habit of buying back shares at peak valuations and selling them at trough valuations. But even leaving that aside, this still isn't a reason to panic.

While management looking to raise equity can be a powerful signal when studied in context, these companies aren't telling us anything important about valuations today.

We've seen a noticeable jump in equity issuances on a six-month rolling average over the past year. But this isn't because management teams think the end is in sight.

In fact, the first spike in equity issuances came during March and April last year – right at the bottom of the market, not the top. Back then, when the COVID-19 pandemic had just struck the U.S., companies needed to source money any way they could to simply stay afloat.

Furthermore, the current low-rate environment has made special purpose acquisition companies ("SPACs") a popular choice for investors over the past few months. These companies offer an alternative to the traditional initial public offering. Sizable equity raises for new SPACs have driven up the spike in issuances, as have secondary raises for these companies when they have taken their target business public.

You might not know much about the world of SPACs. But the important point is, management teams at blue-chip companies across the S&P 500 Index aren't running to source new equity raises...

QuantumScape is working to develop a next-generation solid-state lithium battery. However, the company doesn't expect to see profitability for years to come... So it needs a lot of capital to fuel its investment.

Meanwhile, Nikola is currently under investigation over securities fraud allegations. It's another early lifecycle company starved for capital.

Finally, Canopy burned through a mind-boggling $3.3 billion of cash in 2019 and 2020 trying to turn profitable. Rather than looking for a top, Canopy is grasping for any means it can to stay afloat.

Barron's is barking up the wrong tree. This is just another example of the financial media looking for a story... not a sign of the top.

Editor's note: Joel's unique approach to the markets has earned him the nickname of "America's Top Stock Cop." His unique investigative skill has a history of uncovering the truth... even when it goes against what the financial media wants you to believe.

Today, Joel is issuing a critical warning for investors. If you have any money in the markets, you'll want to see what he has to say. Watch his urgent message right here.

The market is discounting the biggest name in one of today's hottest sectors. Based on traditional metrics, its performance for 2020 looks mediocre. But a closer look shows that it had a banner year, and its stock will likely move even higher... Get the full story here: Here's the Winner From the 'Great Reshuffling.'

As we rely more and more on remote work, employers will need to be able to adapt quickly. And even though many companies have thrived in these conditions, the market is distorting how some of these businesses are valued... Read more here: The Market Hasn't Yet Priced in One of the Biggest Losers of the 'At-Home Revolution.'

Market Notes
THE BOOM IN U.S. HOUSING KEEPS HEATING UP

Regular readers know that the U.S. housing market has been exploding recently. The combination of low inventory and high demand isn’t letting up anytime soon. And folks are snapping up houses left and right – no matter the price. Today’s company is helping to fill this need by building more homes…

PulteGroup (PHM) is the third-largest homebuilder in the U.S. The Atlanta-based company builds homes all over the country (including states like Florida and Texas, where Steve sees huge opportunity in real estate). Right now, business is booming… In the most recent quarter, PulteGroup reported home closings increased 12% to 6,044 year over year. And in the same period, net new orders increased 31% year over year to 9,852 homes.

As you can see, PHM shares are up around 250% over the past five years, including dividends. They recently hit a new all-time high. As the housing market continues to soar, this trend should continue… 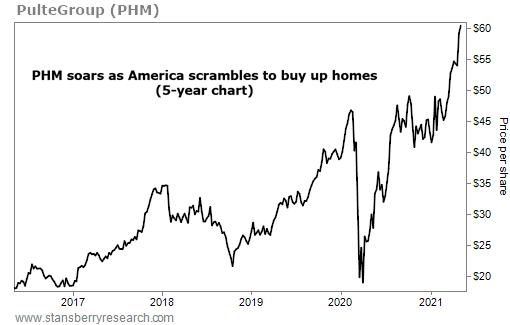