Black Friday: How I Knew Before the Headlines
By Vic Lederman
Tuesday, December 10, 2019

Maybe I'm just a glutton for punishment... because I'm a Black Friday shopper.

It's probably not for the reason you think, though. I'm not there for the "deals."

I usually make an impulse purchase each year. But that's not the draw for me either.

Simply put, I'm there for the spectacle. I love seeing the crowds. I love the absurdity of the people packed into the shops.

There's something about consumerism in action that draws me in... OK, I admit that I'm weird.

But this year, Black Friday was strikingly different.

About three years ago, I moved to Florida. For the first time since moving, my girlfriend and I decided we would do Black Friday at the local mall. We know it as the "Mall of Hell."

That's not a term of endearment.

The Mall of Hell is sprawling. Many of the shops are located across streets from each other, so that you have to drive all the way over to access them. And the shop entrances are prone to mind-melting congestion. We knew we had to be ready to spend two-plus hours in the car... even though the mall is just 15 minutes from our home.

Out of all the places I've been to, the Mall of Hell is among the most obnoxious. So we were prepared for maximum spectacle!

Things were weird from the outset, though.

The exit ramp to the Mall of Hell is backed up on busy weekends. But at 1 p.m. on Black Friday, there was no traffic.

We proceeded to the first store on our list. The parking lot had plenty of open spaces. We parked close to the store, walked in, and that was it.

The crowd, if you could call it that, was moderate. There was definitely no spectacle.

After milling about the shops nearby, we drove over to the next lot. Maybe we were just in the wrong spot?

We thought the hipper shops near REI would be busier. Trendy millennials should be there overspending on fashionable outdoorsy clothes. We were wrong.

REI was CLOSED! It turns out, REI doesn't participate in the Black Friday madness...

Black Friday used to be billed as the biggest U.S. shopping day of the year. And a major retailer has decided it can afford to just "opt out."

All in all, it was an eerily calm day at the Mall of Hell. So, when I saw the headlines the next day, I wasn't surprised...

It turns out, a massive number of people decided the stores weren't for them. They did their shopping online.

Black Friday shoppers spent an average of $362 this year... a 16% increase over last year. But at the same time, brick-and-mortar traffic was down 6%.

There's no question about it... Online shopping is still the dominant trend. And it's still a huge problem for many brick-and-mortar retailers.

As for me? I bought a sewing machine and a few other goodies. I did it the old-fashioned way. All of my spending happened in person.

But I'm the weird one. More and more folks are moving online... Don't expect that trend to change anytime soon.

"I didn't need my wallet, any cash, or a credit card," Chris Igou writes. "All I needed was my phone." While mobile payments are still new in the U.S., there's a huge market for this technology. And it's coming sooner than most folks think... Read more here.

"The Internet has taken its toll on the bygone days of traditional media ads," John Engel says. For the first time in history, spending on digital ads will overtake traditional ads. And these same trends will only create stronger opportunities moving forward... Learn more here.

Today, we’re checking in on a company thriving in the bull market in health care…

Merck (MRK) is a $225 billion drugmaker. It produces lifesaving drugs like Januvia and Janumet (diabetes), Keytruda (cancer), and more. With its expansive portfolio, Merck is able to treat many conditions, including those common in seniors. And that’s great for sales… In the most recent quarter, Merck reported sales of $12.4 billion, up 15% from the same quarter last year. And that sales growth should only continue… Research firm GlobalData predicts Keytruda will be the world’s top-selling drug by 2023.

As you can see in today’s chart, shares have been in a steady uptrend. The stock is up roughly 45% over the past year and a half. As long as patients rely on Merck’s lifesaving drugs, these gains should continue… 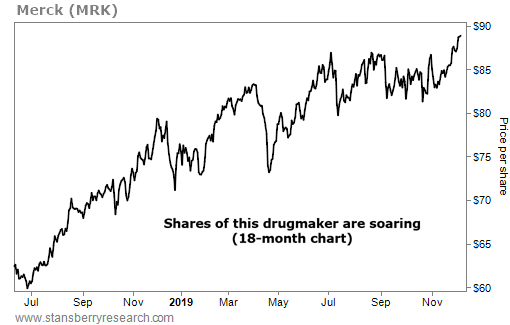