Capitalism's Next Rising Tide Is Here
By Vic Lederman
Thursday, May 28, 2020

It's time for a bit of optimism...

You may not know it. But we're seeing an incredibly good economic omen today.

It has the potential to "redistribute wealth." But not in the way you might expect...

To understand it, we need to walk through a bit of economic theory. Don't worry though... We're not going to get totally lost in the weeds. We just need to focus on one important fact.

The world is changing. And it's changing for the better.

I know it because one economic event has the power to reshape America's middle class. It's happening now. And I believe it will lead to capitalism's next "rising tide."

Facebook (FB) CEO Mark Zuckerberg is making a big prediction about the future of his company.

He believes the company is in for a major change in the next five to 10 years. It's not a change to the social network you probably use daily... but rather, to the way his employees will make it a reality going forward.

You see, Zuckerberg thinks more than half of the company will transition to remote-worker status. And he believes those folks will move away from ultra-expensive Silicon Valley to lower-cost-of-living areas.

This is just one company. But it's likely the start of a trend. And it could be huge. Think about what this means...

Employees with high-paying jobs could have the ability to move wherever they want. Software engineers in Silicon Valley can make as much as $150,000 a year. And that's just a starting salary!

Now, Zuckerberg is warning that some of those folks will take a pay cut if they move to less expensive areas. But don't let that fool you. This isn't outsourcing.

Even if the software engineers from our example make 30% less, they'd still be making more than $100,000 a year. That's almost double the median household income in the U.S.

These days, most households are dual-income homes. And that means that these families will be solidly at the upper end of the middle-class in the U.S.

No matter where these workers settle, it's going to have a big rising-tide effect...

Families like these are drivers of economic clichés. I'm sure you've heard "it's a consumer-driven economy." Well, these families will consume. And they'll be consuming in communities that had previously been underexposed to high-paying tech jobs.

There's no question about it. This will be a big win for the communities these tech workers enter.

This will be capitalism's next rising tide. It will lift up the next generation. And it will lead to a more equally distributed, highly paid labor force.

I'm sure you've already guessed by now... it's not just Facebook that sees this transition coming.

COVID-19 is the supercharging catalyst here. And darn near every tech business is thinking, "Do we really need all of these workers here?"

Employers are letting people work remotely at rates we've never seen before. The majority of Google's employees will be working from home for the rest of the year, for example.

The genie is out of the bottle. And it makes me optimistic about our long-term prospects. You should be, too.

It may feel like economic progress has been shaken to the core. But I promise you... the progress of humanity hasn't been permanently derailed.

We've taken a short detour. But along the way, we've found the ability to unlock the most dynamic labor force that capitalism has ever had access to.

We don't know exactly how it will all shake out. But the odds are very much in our favor.

It's tough to know when to invest. You can either follow your gut about when to get in – or you can put money to work when the data shows that the odds are stacked in your favor... Read more here: What's Really Going on With Stocks and the Economy.

With all the market professionals turning into fortune tellers, figuring out the path of the markets is hard. Fortunately, one indicator has lit the way to every previous recovery in modern times... Learn more here: How You'll Know When We're in the Clear.

Market Notes
WITH OFFICES CLOSED, IT'S A BULL MARKET IN YOGA PANTS

The coronavirus outbreak has shut down offices across the country, and many employees expect to work from home for months to come. That means traditional dress clothes are staying in the closet. Instead, folks need a different type of daily outfit…

Lululemon Athletica (LULU) is a $35 billion apparel company. Its products are most associated with yoga and other physical activities… But when the living room couch replaced the office desk or conference table, Lululemon’s customers found they wanted its comfortable yoga pants five days a week. “The company’s product categories are in the sweet spot right now,” Fortune magazine reported last week.

After falling with the broader market earlier this year, LULU shares have roughly doubled from their March lows – and they recently hit a new all-time high. COVID-19 has upended many industries, but Lululemon has reaped the benefits… 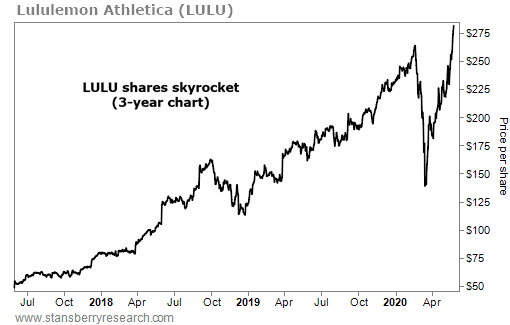