What's Really Going on With Stocks and the Economy
By Steve Sjuggerud
Thursday, May 14, 2020

You have a choice...

You can invest only when you feel like the market fits your investment thesis... Or you can put money to work when the data shows the odds are stacked in your favor – regardless of how you feel at the time.

When I put it like that, it probably seems obvious. But investors run into this dilemma – and do the wrong thing – every single day.

Humans are emotional. We tend to put more emphasis on how we feel than on the data we see.

This is where many investors go wrong...

The noise around them keeps them from recognizing a great opportunity. Most investors miss life-changing gains because of it. Or worse... they suffer crippling losses because they did the wrong thing.

Today, you're probably worried about getting back into stocks. Fear is causing a lot of folks to miss the rebound rally.

One major culprit is the disconnect between stocks and economy. Investors don't see how stocks can rise when the economic picture looks so bad. But as I'll share today, what's happening is more normal than you'd probably expect...

I focus on data when it comes to investing. It's the only way to look past your emotions and make smart decisions in tough times.

So what does the data tell us today?

Right now, it's darn scary out there. More than 30 million people in the U.S. have filed for unemployment since mid-March. The coronavirus has delivered an unprecedented blow to the U.S. economy... And there's talk of a renewed trade war between the U.S. and China.

I get it if you're scared. It's scary to put money in stocks when friends or family are without jobs. But again, the market doesn't care about how we feel. Trying to fit the market's action to our feelings is a fool's errand.

You've probably been worried about rising unemployment numbers over the past several weeks... but the stock market didn't care. The S&P 500 is up 28% since bottoming in March.

But there's an important truth you need to understand. It's simple and perfectly explains what's happened in recent weeks...

The U.S. stock market operates on a different time cycle than the U.S. economy.

Stocks tend to move much faster than the economic environment. They anticipate what's coming. That means stocks are the first to fall during tough times... And they often rally before the economy even begins to recover.

In fact, stocks can rally even when the economic outlook seems to be worsening. Take March 2009, for example...

In the thick of the financial crisis, U.S. stocks bottomed on March 9, 2009. It was the end of one of the worst bear markets since the Great Depression.

We know this was a fantastic time to buy – in hindsight. But if you were an investor back then, it didn't feel that way...

The unemployment rate in the U.S. continued to decline for another eight months. By October, 10% of the U.S. workforce was out of a job for the first time since 1982.

But U.S. stocks had already taken off by then. Take a look... 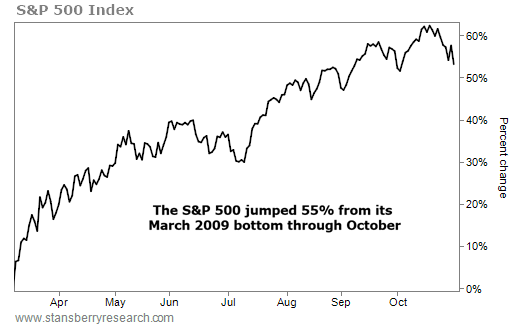 By the end of October 2009, U.S. stocks were up roughly 55% from their bottom that March. Markets were rallying and had been for months. Meanwhile, the U.S. economy looked like it was still going down the tubes.

If you were sitting on the sidelines waiting for the market to "make sense" based on the economy, you missed out on one of the best stock rallies in history.

The same thing seems to be setting up this time around. Stocks crashed 34% in a little more than a month as the reality of the coronavirus set in. By the time stocks bottomed in late March, the economic damage was just beginning.

Stocks were forward-looking then. They saw how bad it was going to get. But they've been forward-looking over the last seven weeks, too... as the economy begins to open back up.

Stocks are up 28% since that March bottom. They're completely disconnected from the economy at this point, just like in 2009. It might not seem to make sense on the surface. But history shows this is exactly the kind of thing we can expect.

Now, I want to be very clear: We can't know for certain what the market is going to do next.

If U.S. stocks fall sharply again in the coming months, clearly things won't have gone our way. It's always important to have an exit plan – and follow it.

For now, stocks are disconnected from the economy. That's normal... And the trend is up. My advice is that you don't fight it.

"The media is focused on trying to see the future," Vic Lederman writes. They're asking how long this will all last. And right now, this one indicator is flashing a signal that will tell us when we can expect the "all clear" for the broad market... Read more here: How You'll Know When We're in the Clear.

As folks take measures to slow the spread of COVID-19, some are uneasy about being in public… especially older adults and people with medical conditions. But even those who stay inside still need to buy food and everyday items. Today’s company is adapting to accommodate its customers’ concerns…

Sprouts Farmers Market (SFM) is a $3 billion specialty grocery chain. It sells organic foods at more than 340 stores coast-to-coast. And in the midst of the pandemic, the company is working to let its customers shop in a way that makes them feel safe. Sprouts recently announced plans to expand its grocery pick-up service from just 55 stores to all of its stores in partnership with delivery service Instacart. That will allow folks to place orders and pick them up without going inside.

SFM shares have risen during the crisis, up more than 90% since their March 12 low. And they recently hit a new 52-week high. As fearful consumers continue to buy no-contact groceries, that trend should continue… 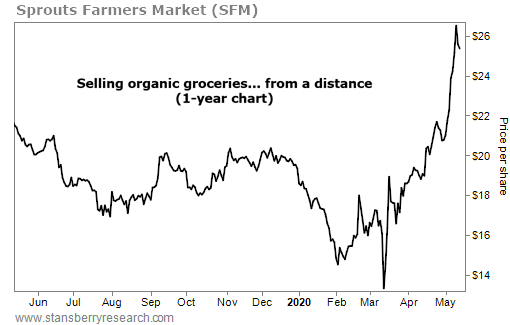