Do You Use the Best Data Available?
By Marc Chaikin
Wednesday, May 19, 2021

Editor's note: Marc Chaikin has done it all on Wall Street... He started as a broker more than five decades ago. He's worked as an analyst. And he's built quantitative models that the financial elite use to make buy and sell decisions every day.

Eventually, Marc decided he was done helping the rich folks on the Street get richer. Instead, through Chaikin Analytics (now our corporate affiliate), he is leveling the playing field for mom-and-pop investors. Today, he's sharing one of the first lessons he learned on Wall Street. And you'll hear more from him in the weeks to come...

"You're not really going to only rely on the firm's research, are you?"

It was 1966. I had just landed a position as a broker. And at the time, I really did think my own firm's research would be plenty for me and my clients.

A member of the "old guard" had pulled me aside to tell me different. "Listen, you'll have to learn this on your own. But there's someone I think you should know about..."

It might sound like a random piece of advice. But it was actually a life-changing introduction... one that completely transformed my approach to helping investors.

It started when my colleague introduced me to George Chestnut's financial writing. I'm guessing you haven't heard of Chestnut. But his work was pioneering at the time.

That made Chestnut an outsider for sure. Back then, nearly everyone was looking at a smattering of fundamentals. Then, they'd assemble an interesting story around those few bullet points, and that was it.

The best storytellers turned out to be talented brokers. That is, they were talented at getting their clients to buy.

The day of that conversation, I realized my mentor was right. I needed more than just stories.

My clients deserved better. Not only that, but to be able to really sell, I knew I'd need to have data to back up my claims.

So, I did the most reasonable thing... I signed up for Chestnut's newsletter service.

Here's the thing, though. To get the best data, you have to go the extra mile...

Chestnut was a bit out there compared to most analysts at the time. The guy spent his time meticulously tracking the major industries trading on Wall Street. He did a lot of it by hand. And he did the rest with early calculators.

Those of us who were around back then know what a monumental task this was. You'd have to be a little crazy to even pursue it.

I didn't realize where I was headed, back in the '60s... not at first. But once I looked outside my own firm, I started to follow Chestnut's path. My life's work became collecting data, parsing it, and using it to make evidence-based investing decisions.

I've been very fortunate and successful at it.

Bloomberg built my systems into its world-famous trading terminals. And its main competitor Thomson Reuters did too.

I made finding the best data into my life's goal... and just as important, performing the best analysis on it.

I've found it deeply rewarding. And I'm passionate about sharing it. That's because the best data gives you an edge as an investor that nothing else can.

I saw firsthand exactly how important this was – after the financial crisis in 2008...

I saw the little guy get creamed by Wall Street. So my focus shifted yet again. I developed a set of tools for individual investors. They're specifically designed to turn trading and investing into a fair fight, for those who aren't Wall Street elites.

Together, this set of tools is called the Power Gauge. And I've poured everything I've learned over my more than 50 years in finance into it.

Over the next few days, I'll be posting more essays here. And I'll get into the details of the Power Gauge and how it works.

I believe you'll come to agree that it's the best data available to individual investors. I'm looking forward to sharing it with you.

Editor's note: Marc's clients have paid thousands of dollars per month for his system's findings. But right now, he's offering access to his breakthrough indicator, for free... because on May 25, he's going public with the biggest prediction of his career – a shift that could determine the next group of millionaires in America. And he wants you to be ready... Learn more right here.

Investors have to deal with a constant stream of information. You can use it to your advantage... But it can also be too much to handle. Learn more about how to navigate the markets in a fast-paced world here: How to Protect Yourself... From Yourself.

"Have you ever wondered why most local stockbrokers aren't multimillionaires?" Eric Wade asks. Most investors are too bogged down in the little details to see major trends. But that doesn't have to be you... Read more here: Say Goodbye to the 'Little Pond' With This Information Edge.

Market Notes
A TRIPLE-DIGIT RALLY FOR THIS POPULAR TIRE MAKER

Today, we’re highlighting a stock that’s bouncing back from a massive dip…

As regular readers know, we like looking at companies that go from “bad to less bad.” After a company’s shares have plummeted, even a small uptick in investor sentiment can lead to solid gains. And today’s company proves that sometimes, these setups can even precede huge rallies…

Goodyear Tire & Rubber (GT) is a $5 billion tire manufacturer. It sells tires under its flagship “Goodyear” brand and offers auto-repair services as well. The company has struggled for some time, then took a big hit as the COVID-19 pandemic forced folks to remain home… leading to a 19% drop in tire unit sales volumes for 2020. Now, vaccine rollouts are helping to reopen the economy… And in the first quarter, Goodyear made $3.5 billion in sales, up 15% year over year.

As you can see in today’s chart, GT shares are rebounding. They’re up more than 330% from last year’s lows… And they recently hit a fresh 52-week high. As investors overcome their fears, we should see more “less bad” rallies across the economy… 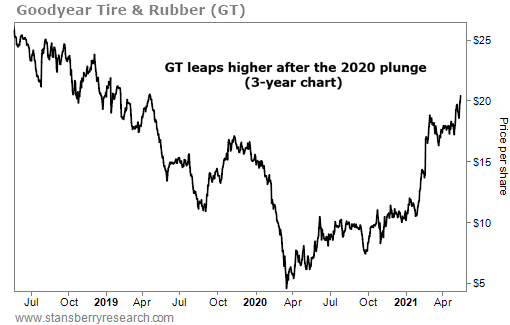