The sentiment shift in the housing market has been nothing short of extraordinary...

U.S. home prices rose 18.8% in 2021. Mortgage rates were around 3%, near record lows. And there was seemingly infinite demand chasing a scant supply of houses.

Then, inflation soared to new heights... The Federal Reserve turned off the flood of easy money... Mortgage rates more than doubled... And buyers dried up in a lot of markets.

The excitement of the boom turned into incredible pessimism in just a few months. Housing sentiment is now at its lowest level since 2011. And the fears of a housing bubble and looming crash are growing by the day.

Today, I'll share why those ideas completely miss the mark. Yes, housing is set for a slowdown... But today's market is drastically different than that of 2008. And it makes a major bust near impossible.

Folks are starting to draw parallels to the housing bubble of the 2000s. Home prices have actually risen faster in recent years than they did back then... So, the logic goes, a downturn this time around should be just as bad – or worse.

Fortunately for us all, though, that thinking misses something important. You see, the factors driving today's boom are drastically different than what caused the bust back then...

Rampant speculation and dangerous lending practices personified the 2000s housing mania. Adjustable-rate mortgages meant folks could take out larger loans than they could afford... And the bubble mindset of lenders killed off the typical checks and balances of underwriting.

The money was easy... And everyone wanted in on it. That led to lots of bad behavior, lots of bad loans, and a catastrophic collapse in housing prices.

Today, mortgage holders are in much better shape...

For starters, the median credit score for mortgage borrowers in the first quarter was 776. That's up from 707 in late 2006. Plus, well under 10% of mortgages are made out to subprime borrowers (those with credit scores below 620). During the 2000s boom, subprime loans made up around 20% of mortgages.

So we know borrowers are much higher quality today than they were back then. And the stake they have in their homes is stronger too.

Homeowners have nearly $10 trillion in tappable home equity (the amount folks can borrow against with a mortgage), according to housing-analytics company Black Knight. That's up 35% versus 2020. And the average homeowner has $185,000 in tappable equity.

Best of all, this is drastically higher than anything we saw in the 2000s. Take a look... 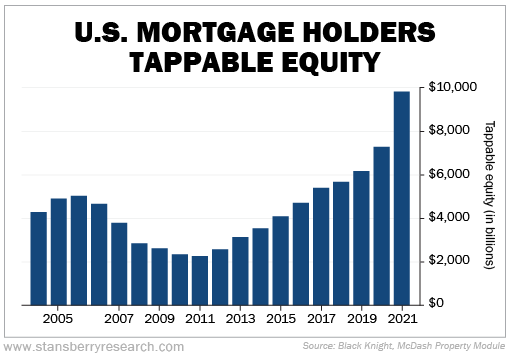 The upside to fast-rising housing prices is that the buyers end up with a lot of value in their home. That's money they could pull out for something else... or a cushion in case prices do retreat slightly.

However, with credit scores high – and equity even higher – the idea of mass foreclosures just isn't logical. It happened last time because there was a ton of risky lending followed by cratering prices. But folks today are in better financial shape and have more skin in the game.

Those who assume this boom must precipitate a bust are still fighting the last war...

That doesn't mean prices can't come down at all in various markets. They can... and likely will. But declines of 30% to 40% in major markets like last time? Don't bet on it.

The white-hot housing sector is hitting the brakes. But despite dropping prices and houses staying on the market for longer, we're not heading for a crash. A few key factors are keeping history from repeating itself this time around... Read more here: Housing Prices Hit the Brakes... But a Crash Isn't Coming.

The Federal Reserve has been hiking rates to tame inflation... And everyone wants to know when the central bank will finally "pivot." Inflation is raging, but until the federal-funds rate overtakes the inflation rate, this story isn't likely to change... Learn more here.