We've all heard the horror stories...

The thought of outliving your money has probably kept you up at night. Maybe you're wondering if you'll be able to retire. Or, maybe years after you've retired, you find you've run out of money and are forced back to work...

This nightmare happened to Jerry...

Jerry thought he had everything figured out for his retirement. He retired in 2000 with a nest egg of $1.5 million – and most folks would agree that's a sizeable portfolio that could very well last out his retirement.

His plan was to take out 4% at a time and live off that. The only problem is that 4% was not enough. He still had $240,000 on his mortgage and two car payments. And his daughter got married shortly after he retired, so he reached into his account once again to make sure she had her dream wedding and a nice honeymoon.

You might think it's easy to avoid these problems. But in fact, it's common to spend more in retirement than you did working...

One study from JPMorgan Asset Management found that median spending by its credit-card customers one to two years before retirement was $43,000. That figure rose to about $45,000 in the first year or two of retirement.

Free from work, retirees want to get out and enjoy themselves. They spend on things like travel and home renovation.

Getting back to Jerry... He also made a big purchase in his early retirement years. He bought a beach condo in Florida (as a lot of retirees do).

Underestimating just how much he would spend while in retirement, his $1.5 million nest egg quickly evaporated. Just a few years after retirement, he only had $238,000 and a lot of years left to live.

You probably know how this story ends... Jerry was forced to go back to work. Just to afford his bills, he worked as a door greeter at Walmart.

Stories like these happen all the time. You likely know someone in your life who felt prepared for retirement only to be struggling just a few years later.

Maybe it was a relative who saw their portfolio get cut in half back in 2008. Unlike the market crash of 2020, the recovery from the housing bubble was long... and painful. Many retirees didn't recoup their capital fast enough to avoid reentering the workforce.

But it doesn't take a financial crisis for your money to dry up too soon. It's a sad truth, but many Americans underestimate how much they'll need to retire. Relying on Social Security won't cut it.

According to the World Economic Forum, the average American is expected to run out of savings at some point during retirement. The report also states that most retirees in the U.S. will likely outlive their savings by around eight to 10 years – assuming a life expectancy of age 85. And we know that many of us are going to live past 85.

During your retirement, you want your money to be working for you and growing. That's why it needs to be invested. But the threats to your nest egg today are real.

First, there's the possibility of a market crash.

Stocks are trading at all-time-high valuations. The S&P 500 Index is currently trading for 27 times earnings and 3 times sales. The last time stocks were this expensive was right before the dot-com bubble burst in 2000... 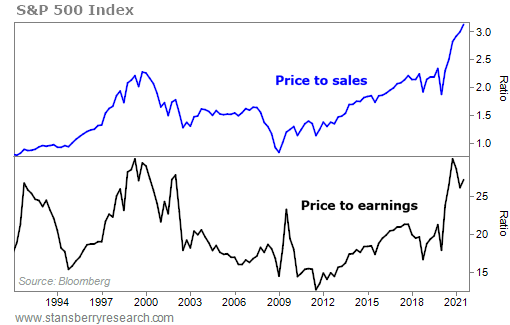 Given how expensive stocks are today, some retirees might be too afraid to put their money into the market. But where else can you put your money?

There's no yield to be found in bonds. A certificate of deposit is paying less than 1%.

Also, fixed-income investors might be crushed if there is high inflation over the next few years, which I expect there will be.

Inflation erodes the purchasing power of a bond's future cash flows. Goods and services become more expensive, but your income stays the same.

Inflation is a real concern for retirees, and it's something that many of our readers have been writing in about.

It's a troubling time to be retired or getting close to your retirement. There's a lot that can go wrong.

That's why you need to make sure you have enough money to retire – especially now. So make a budget... secure the income streams you can... invest in solid, low-risk businesses you want to own for the long term... and don't underestimate your costs.

Editor's note: If you're nearing retirement age today, you're up against soaring taxes, inflation, high advisor and portfolio fees... and a roaring bull market that won't last forever. That's why Doc recently shared the No. 1 lie being told to American retirees, and a shocking tweak you can make to the way you're managing your money. This small change could have a massive impact on your wealth... Learn more here.

If you don't have enough saved, you're at risk of ruining your retirement. All too often, retirees burn through a large part of their nest egg in just a few years. But this doesn't have to happen to you... Get the full story here: Retirement Life Is More Expensive Than You Think.

In the investing world, a "sure thing" doesn't exist. Even the best idea can go from massive gains to portfolio-crushing losses. That's why you need to protect your downside with this simple strategy... Read more here: The Secret to Taking Profits Instead of a 70%-Plus Loss.

Market Notes
PROTECTING THE WORLD FROM CYBERCRIME IS A WINNING BUSINESS

The modern economy depends on technology and data to function. Because of this ever-increasing reliance, cybercrime can bring everything screeching to a halt – like the Colonial Pipeline ransomware attack in May that disrupted the fuel supply in the Southeast U.S. Today’s company is there to protect us from those kinds of attacks…

Palo Alto Networks (PANW) is a $45 billion global cybersecurity leader. It has more than 85,000 customers in 150-plus countries around the world. And as the world continues to rely on the Internet to function, Palo Alto is benefiting… In the most recent quarter, revenue grew 28% year over year to $1.2 billion, beating Wall Street expectations. And adjusted earnings per share rose from $1.48 year over year to $1.60.

PANW shares are in a long-term uptrend, up nearly 220% over the past five years. And they’re hitting new all-time highs. As Palo Alto continues to protect businesses from cybercrime, that trend should continue… 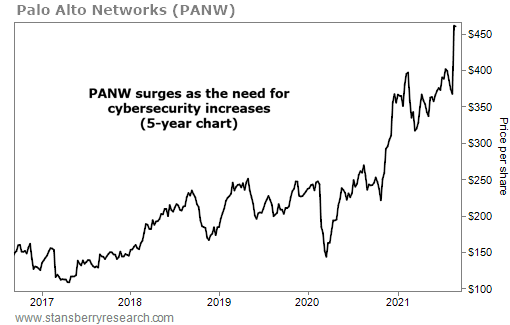