I'm sure you've seen the stories...

During the pandemic, getting out of dense, expensive cities like New York became priority No. 1 for a lot of people. Suddenly, folks couldn't afford to pay the rent... And worse, the crowded living conditions had deadly consequences.

Living in the Big Apple had become a big liability.

All of this is grim. But the story doesn't end there. The simple fact is that COVID-19 supercharged the "American Migration" that I outlined yesterday. That trend is continuing right now... We're even seeing major financial firms, like Goldman Sachs, move their highly paid bankers to Florida.

The high taxes and expensive residential market were always a problem in states like New York. (And for businesses, you can throw in stricter regulations to boot.) But the pandemic made those annoyances untenable.

Importantly, this trend is nowhere near over. The momentum created by COVID-19 will keep it rolling for years.

People follow growth. Growth is where the money is. And right now, states like Florida are growing. It's a self-perpetuating cycle.

This new American Migration means it's boom time for these areas... and for housing as a whole. And that's in spite of the recent fears over yet another consequence of COVID-19: rising evictions and foreclosures.

For months, major news outlets were wringing their hands about the eviction moratorium. It's one of the more politically contentious issues surrounding the COVID-19 crisis.

The moratorium started in March 2020 with the Coronavirus Aid, Relief, and Economic Security ("CARES") Act. Landlords wouldn't be able to evict their tenants until 30 days after it expired. And the political machine in Washington kept kicking that can down the road... all the way through the end of this summer.

Then, in August, the Supreme Court blocked the last kick of the can. It ruled that the Centers for Disease Control and Prevention did not have the authority to require the moratorium.

If the government wanted to extend it nationally, Congress would have had to act... And it didn't.

Now, thousands of landlords, small and large alike, are in the process of removing hundreds of thousands of nonpaying tenants.

Similarly, we have the issue of foreclosures...

The pandemic turned the labor market on its head. And many homeowners, even well-qualified ones, found themselves falling behind on their payments.

Many of them took advantage of the mortgage forbearance part of the CARES Act. At the peak of the crisis, more than 7.2 million American homeowners had paused their mortgage payments.

Roughly 1.7 million homeowners were still in the forbearance program as of this time last month. And that program expired on September 30.

You might think that these grim realities could topple the housing market. I've seen headlines suggesting that myself...

These kinds of warnings get a lot of clicks. But articles predicting a meltdown in the housing market are missing the basic math of the situation...

The U.S. housing market is short roughly 5.5 million units. A few hundred thousand renters and roughly 2 million homeowners exiting their homes will not close the supply gap. And that assumes everyone in the CARES Act programs will have to leave, which won't be the case.

Plus, the idea that banks are rushing to foreclose on those homeowners is a little silly to begin with. That's because even in a hot housing market, foreclosures tend to be a last resort for banks...

Those plans allow the homeowner to pay a balloon payment at the end of their mortgage. Or – and this is the more likely scenario – when the house is next sold, the bank will take its cut out of the homeowner's equity to balance the missed payments.

I realize we're getting into the weeds. But the takeaway is simple...

It's going to take months, or the better part of a year, to sort all of this out. And when all is said and done, it's unlikely that the evictions and foreclosures will be significant enough to close the supply shortage in housing.

So please, don't let the headlines worry you. Evictions and foreclosures won't cause a housing crash.

P.S. We've been pounding the table on the opportunity in housing for a reason. Almost nobody believes this boom can continue... And that confusion means we have the opportunity to make incredible investment gains – without buying physical real estate. Get the full story here.

"When it comes to housing, it's always about supply and demand," Steve says. Right now, the supply imbalance in the housing market means the price of homes can soar even higher... Learn more here: Why the Housing Boom Is Nowhere Near Over.

"The pandemic unexpectedly kicked off some major economic trends," Chris Igou writes. People are moving from big, expensive cities into cheaper parts of the country. And this could be the start of a new major trend... Read more here: Why the Housing Boom Is Sure to Continue (in Certain Areas).

Market Notes
A TRIPLE-DIGIT RALLY IN THIS COMMODITY-BASED BUSINESS

Commodities can go through huge booms and busts. That’s because it takes time and money to build a mine or drill a well… So when supply and demand get “out of whack,” producers keep producing, and the imbalance can take a long time to snap back. That’s what we’re seeing with today’s agricultural company…

Mosaic (MOS) is the world’s leading producer of phosphate and potash – essential ingredients in fertilizer. The company serves farmers in more than 40 countries. Lately, high demand and tight supply have raised potash prices. And while fertilizer isn’t an exciting business, it’s something the global agricultural community can’t do without… In the second quarter, Mosaic reported revenue of $2.8 billion – up 37% year over year.

As you can see, MOS shares have marched higher since their March 2020 lows. They’re up more than 500%, and they recently hit a new all-time high. It’s one example of how catching a commodity boom at the right time can lead to huge gains… 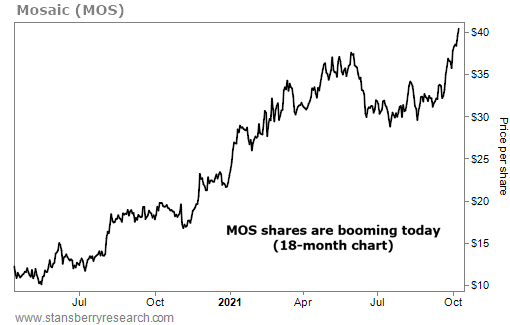