That's what most folks believe. Amazon is the hot story, after all... It's the face of modern retail in the media. It's quickly grown into one of the world's most valuable businesses. But the reality is that Amazon isn't the world's largest retailer.

With more than $500 billion in sales in 2018, that distinction still belongs to Walmart (WMT).

Walmart's business is boring compared with Amazon's. But that doesn't mean it's not a great place to make money, especially right now.

That's because the company's stock recently broke out to a new all-time high. And history says that's a major positive for the stock. We could see another 11% gain over the next six months thanks to this major breakout.

Walmart has dominated U.S. retail for decades. It's done so by keeping costs low and passing savings on to the customers.

Lots of folks are price-conscious shoppers. If that's your mentality, it's hard to shop anywhere else. That model has helped Walmart's business thrive. And the good times for Walmart's stock should continue as well, based on what's happening right now.

After nearly a year and a half of trading sideways, Walmart is now in uncharted territory. The stock took off at the beginning of last month and hasn't looked back.

It's up double digits since the beginning of June. And it's been hitting new all-time highs along the way. Take a look... 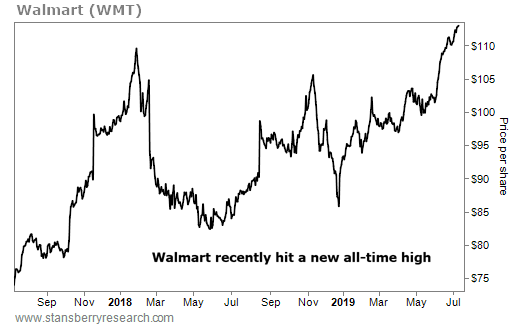 Walmart took off in June. And its recent rally surpassed the previous all-time high set in 2018.

Many investors would see this rally and assume they missed it... But don't make that mistake today.

Since 1980, new highs have led to more gains for shares of Walmart. That means we can expect double-digit upside over the next month – solid outperformance compared to the company's typical returns. Check it out...

Walmart has been a great performer for the past four decades... returning 8% over a typical six-month period. That's roughly the same as the overall market's annual return... but in half the time.

Still, in the right situation, you could've done even better. Buying after 52-week highs has led to 5% gains in three months and a solid 11% over the next six months. Those are healthy outperformance numbers and impressive short-term returns.

Yes, Walmart is in uncharted territory. The stock is up double digits in just a few weeks. But that doesn't mean a pullback is imminent. And it doesn't mean you missed it.

History says we should count on more gains from here. We could see an 11% rally in Walmart over the next six months... And that makes it an investment worth considering right now.

"A great run higher doesn't necessarily mean it's too late to buy," Whitney Tilson says. Don't fall into the "I missed it" trap... Even after a big rally, you can still lock in spectacular gains. Read more here: The Three Most Dangerous Words in Investing.

"We're big believers in the old market saying: The trend is your friend," Ben Morris writes. That's true for individual stocks like Walmart. But it's especially useful for timing the overall market. Learn more here: Why You Don't Need to Predict the Exact Peak in Stocks.

Today, we’re looking at a global leader in the “cashless revolution”…

All around the world, people are leaving their cash at home (and often even their credit cards). From online shopping to personal money transfers, people love the ease of using their smartphones to pay… and the convenience of not carrying around a pocket full of heavy change. Today’s company is profiting as more and more consumers switch to cashless payments…

Worldpay (WP) is a $40 billion payment-processing company. It provides online payment services in 146 countries, and processes 40 billion transactions annually. As the public turns away from cash, Worldpay is there with card readers, mobile solutions, and more… And its business is thriving today. Revenue jumped to $970 million in the first quarter, up 14% from the first quarter of 2018.

As you can see, Worldpay has steadily marched higher as it profits from the cashless revolution. It’s up more than 275% in the past five years… And as more and more people ditch cash, this trend should continue… 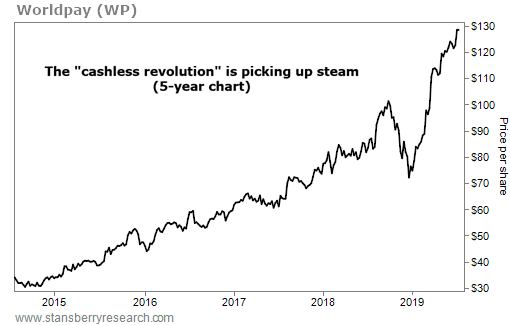