Ending the Privacy Bidding War Is a Frontier for New Investment
By Eric Wade
Wednesday, June 29, 2022

For all of these companies, the main product is you.

And to get the most money when they sell you to advertisers, pollsters, and Snowden-knows-who-else... they need to invade your privacy.

Hackers, scammers, and phishers do this using sneaky and unethical methods. But social media sites and other web publishers don't need to. They invade your privacy by taking the information you give them voluntarily in exchange for their services... and sell it to marketers.

If that worries you, it should. And you're not alone... According to Google Trends, more people than ever are searching for the phrase: "If the product is free, you are the product."

Americans want their privacy back. It's a problem that needs to be solved. Today, I'll explain what this means for investors – but first, let's look at how we got here...

In the 1990s, the dot-com boom was a time of outrageous profits for lucky (smart?) investors. I was one of them.

My best investment was the single-word domain name (a URL that you type into your browser to go to a webpage) that I bought for $7. I sold it six years later at the peak of the dot-com mania for more than $1 million.

The buyer paid that much simply because they believed lots of people would type in that domain name – and that all those "eyeballs" were worth paying for. (They were right.)

That was 1999. Up until that point, many Internet companies had been getting by without revenue because they could simply burn through investor capital. But after the early 2000s dot-com sell-off, they had significantly less investor capital to burn through.

So, Internet companies turned to advertising. But the advertising models for newspapers and television didn't work at all on the Internet...

For example, Internet surfers in the '90s wouldn't tolerate big, full-page "display" ads. And bandwidth back then didn't allow for streaming video like TV commercials required.

At the time, I had a job helping small Internet companies with advertising. After the bust, we shifted our focus away from simply "getting eyeballs," as it was called, and toward strategies that worked.

The race was on to monetize every inch of the Internet in ways that early publishers hadn't. A new tactic evolved – pay per click (or "PPC").

PPC is a way to measure the effectiveness of ads. Internet advertisers pay Google or Microsoft Bing or Meta or Twitter anywhere between one penny and $109 every time you click on an ad. Whoever wins that bidding war is the one whose ad you see pop up on your screen. Suddenly, every click on every ad became worth something.

This model cuts costs for the advertisers. It grabs your interest by giving you content you want to click on. And it's a proven tactic to boost revenue for the advertiser, its publisher, and the medium that sold it the ad space to begin with.

But it's also a gross invasion of your privacy. Now, everything we look at, watch, read, or interact with is monetized by the publisher who created it... And as web browsers have gotten better at tracking your behavior, that monetization can target almost everything about you.

Hence, "you are the product."

The idea behind this phrase originated in the 1970s as a caution against what was seen as the over-commercialization of television...

But it's even more true today. The things we consume on the Internet are only free because advertising revenue (like text ads, search results, or video ads) supports the publishers of free content.

If you use Google Trends to index how often folks search for this phrase, you see that it gained as much popularity in the 10 years from 2009 to 2019 as it did in the three years from 2019 to today... 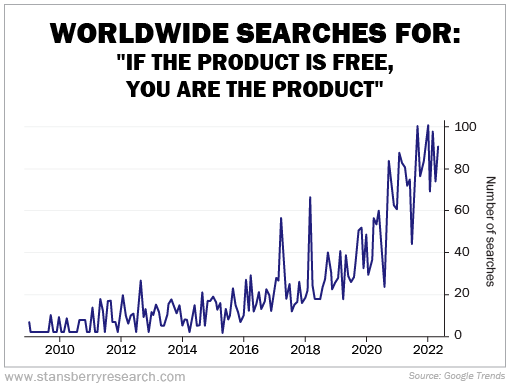 It's not just Google Trends, either...

Market intelligence firm Morning Consult polled 1,992 registered American voters in 2021 and found "86% of Democrats and 81% of Republicans said Congress should make privacy a 'top' or 'important but lower' priority in 2021."

That's at least four out of five people in both parties on the same side of an issue. We can't think of any other issue fostering that kind of bipartisan agreement.

There's an unprecedented level of agreement from the bluest of Democrats to the reddest of Republicans... saying something has got to be done about privacy.

We're online more than ever. And with the coming wave of the Internet of Things, we'll be more connected to the Internet than ever before.

U.S. Internet ad revenues surpassed TV advertising in 2017, according to Statista... And globally, the industry is worth $365 billion today. So far, the advertisers have won.

But demand exists for a web experience where you don't have to sacrifice your privacy to go online. Both sides of the aisle support it. And figuring out how to solve this problem will mean disrupting an industry worth hundreds of billions of dollars.

This will be a huge opportunity for innovative companies looking to create the Internet of the future. We'll soon see newcomers bent on ending the privacy bidding war... And it will be a major frontier for investment in the coming years.

Editor's note: One of Eric's subscribers came to him last year with an anonymous letter. Now, we're finally sharing the full story behind it. It has to do with the Stansberry Research strategy that has created more huge winners than any other in the history of our company... including more than 60 opportunities since the beginning of 2020 that could have made you anywhere between 100% and 5,000% gains. Get the details here.

"A handful of innovations are about to change our world in the same way the Internet did in the 1990s," Matt McCall writes. And if you know which stocks to own, you could earn returns similar to what we saw during the dot-com boom... Learn more here: This Investing Advantage Could Be the Secret to Massive Wealth.

"It's the bedrock our future will rest on," Matt says. History shows that the next generation of technology giants will not only change the world, but help investors make massive gains as well... Read more here: Why '5G' Will Unleash the Market's Next Trillion-Dollar Winners.